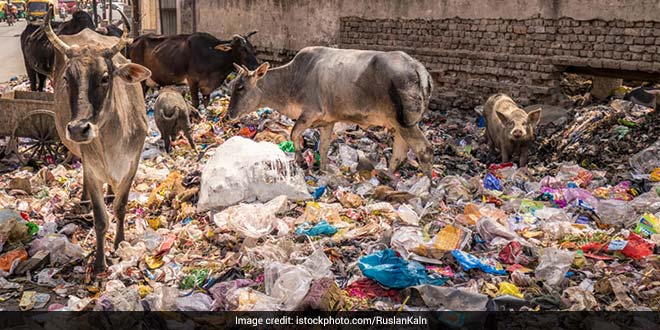 Jaipur: The boom that followed India’s economic liberalisation in the 1990s led to an “exponential increase” in the accumulation of garbage while also changing at the very nature’ of litter generated. This “storm of waste” is a ticking time bomb and could have disastrous, fatal and horrifying consequences if not checked, say Robin Jeffrey and Assa Doron, who have co-authored the monumental “Waste of a Nation: Garbage and Growth in India”.

Mr. Doron, an Associate Professor of Anthropology and South Asia Studies at the Australian National University, once went to Seelampur on the outskirts of Delhi and was “horrified” to see the manner in which old mobile phones, e-waste, were being treated.

He immediately and approached Jeffrey, a visiting research professor at the Institute of South Asian Studies in Singapore, saying, “This is huge, we need to study garbage in India,” thus beginning the research for the book. Mr. Doron told IANS on the sidelines of the Jaipur Literature Festival,

Since India’s boom in the 1990s and the aftermath of its economic liberalisation, the volume of waste has increased exponentially and the nature of waste has changed too. This boom has also produced construction and demolition waste, the hazardous waste and the plastic and the fast-moving consumer waste.

India, for example, had a culture of using biodegradable plates instead of plastic plates that you see all around today, he said.

“All of these together make an almost perfect storm of waste which is very difficult to tackle unless you do it at different levels of governance,” he added.

His co-author Mr. Jeffrey, on the other hand, said that there is some value in the waste and the people who work in the landfills extract that value. Mr. Jeffrey told IANS,

While you got to extract that value out of the garbage, it must, must follow a certain procedure.

He said this complexity applies to all kinds of waste. “You have to find out who is throwing it, why is he throwing it, is there a need to throw it, who is the first person to handle it and then where can it go to have a new life.”

The pharmaceutical industry is centered now in India because certain ventures are not profitable anymore in the West. These multinationals have outsourced their companies to India, particularly Hyderabad, which has emerged as the pharmaceutical capital of India. A lot of what they discharge into the waterbodies and in the soil are active ingredients. They are creating a bacteria-resistant environment, what is also known as superbugs.  Anthropologist Mr. Doron said,

It’s disseminating and killing the fields, its harming the livelihood of the people who live in the periphery of these companies. It’s creating new bugs that even the most powerful antibiotics cannot tackle. So you have a situation where effluents produced as a result of bringing new industries in India, or creating special economic zones, is actually harming India in the long run. There has to be better planning and corrective measure need to be applied.

Mr. Jeffrey said that life expectancy for those working and living around landfills in India is just 39 years as respiratory diseases and infections are common among them.

They suggested empowering of local urban bodies and municipalities to deal with the crisis.

“At the moment they have the responsibility but they do not have the wherewithal, not do they have enough trained staff,” said Mr. Jeffrey, while Mr. Doron added that local governments need to partner with civil society and the people who are already on the ground dealing with waste. They need to be made aware of the serious health implications, and “trained in extracting value from waste without hampering the environment or causing serious health implications” to themselves or those around them.

Reduce, Reuse And Recycle, Should Be The Mantra For All Those Dealing With Plastics: Vice President M Venkaiah Naidu