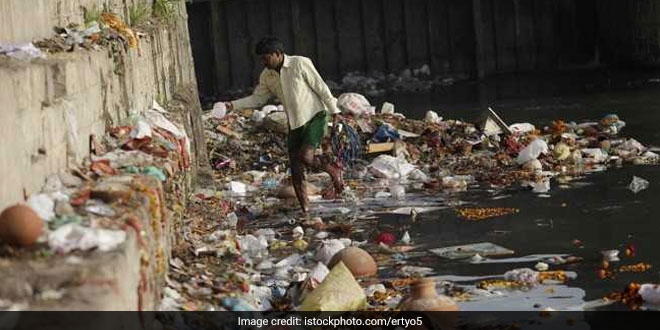 New Delhi: Film and Television personalities should be roped in to spread the message that idol immersion is leading to “unacceptably high level of toxicity” in the Yamuna river, according to a committee appointed by the National Green Tribunal. The panel also said that these celebrities can send the message across that “only clay idols without paint need to be used”. The committee said in its directions to the Delhi authorities,

An awareness programme that use appropriate TV and radio channels should be started in a planned way, bringing out why idol immersion is leading to unacceptably high levels of toxicity in the river. Well-known personalities can be interviewed e.g. film stars, TV actors as well as leading NGOs.

National Green Tribunal chairperson Justice A K Goel had set up the committee in July to monitor the cleaning of the river. The committee comprises former Delhi chief secretary Shailaja Chandra and retired expert member B S Sajwan.

The committee, in its report, submitted to the NGT also suggested that authorities explore the possibility of creating artificial ponds and pits in various localities for idol immersion. It also suggested that the height of idols should be restricted to a maximum of three feet. The suggestions have been made taking a cue from Surat in Gujarat, which recently set an example by not allowing any idol immersion in the Tapti river.

The Surat city reported to have set up 4,000 CCTV cameras, deployed 8,000 police personnel, 3,250 home guard jawans, six companies of the State Reserve Police and one company each from the BSF and the RAF for effective deterrence against immersing idol in the river.

The police commissioner of Surat was contacted by the monitoring committee and asked for an official report on the strategy of zero tolerance for idol immersion in the river, the committee said.

According to the report, the police commissioner said that with full public co-operation, 60,000 idols were immersed in local pits and none was immersed in the river or any water body. The officials of Delhi NCR have been advised to get a first-hand idea of how things were managed there.

Also Read: Toxic Materials In Idols Behind Spike In Heavy Metals In Yamuna After Immersion, Says The NGT Formed Committee

The period between January and March should be used to plan effective management with the goal of controlling toxicity in the river. The Divisional Commissioner may consider visiting Surat along with relevant police special unit to get a first-hand idea on how things were managed there, the committee further added.

The NGT may consider whether a direction can be given that river immersion be replaced altogether in the interest of public safety on the lines of Gujarat example of 2018 which was managed successfully,” the committee said. “This could be done after the visit by the officials to Surat and receiving the report.

The monitoring committee also noted that concentration of heavy metals has increased in the river due to immersion of painted and polished idols with metallic ornaments and shiny materials. Post-immersion, the level of chromium increased 11 times from the limit (0.05mg/l) set by the Bureau of Indian Standards (BIS), while iron concentration increased 71 times from the 0.3 mg/l limit.

The Nickel level also increased while the lead level went up two times from the 0.01 mg/l limit, the CPCB said. According to researchers, toxicity of heavy metals can damage functioning of brain, lungs, kidney, liver and other vital organs and also can alter blood composition. Long-term exposure can lead to ailments such as multiple sclerosis, Parkinson’s disease, Alzheimer’s disease and muscular dystrophy, among others.

Central Pollution Control Board guidelines state that idols should be made from natural materials and clay should be used while baked clay, plaster of paris and other such items should not be allowed.

“If idols are to be painted, water-soluble non-toxic natural dyes should be used. Use of toxic and non-biodegradable chemical dyes for painting idols should be strictly prohibited,” the guidelines said.