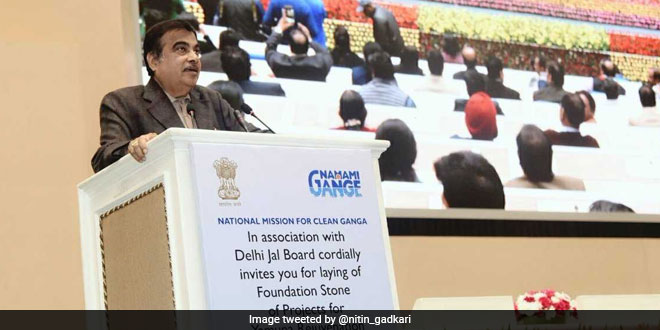 New Delhi: To clean the waters of Yamuna and rejuvenate the almost dying river, the Union Minister for Water Resources Nitin Gadkari laid the foundation stone for eleven projects in Delhi. The projects were launched under National Mission for Clean Ganga (NMCG) on Thursday and Delhi Jal Board will be the executing agency for these projects. Mr. Gadkari, in his speech urged the government of Delhi, Central government, local authorities and all other stakeholders to come together and work on a war-footing to make Delhi free from water and air pollution.

The Ministry of Water Resources, River Development and Ganga Rejuvenation said in a statement,

Most of the projects are for the sewerage infrastructure and are at various stages of implementation. These projects under Yamuna Action Plan (YAP) III are located in three drainage zones namely Kondli, Rithala and Okhla in Delhi.

He added, “The sewerage projects are being taken up in four packages of Kondli (K1, K2, K3, K4), three packages of Rithala (R1a, R1b, R2) and Okhla zone (O). Out of these, seven projects are at various stages of implementation and one project of Okhla zone is under tendering process.”

The foundation was also laid for nine decentralized Sewer Treatment Plant (STPs) (with a capacity of total 2.25 Crore litres per day) and water bodies’ rejuvenation at Chattarpur at a cost of Rs 65.24 crore.

A total of 11 projects have been taken up by the National Mission for Clean Ganga (NMCG) to conserve the 22-km stretch of the Yamuna (from Wazirabad to Okhla barrage) in the national capital. Mr. Gadkari said,

With these projects, the sewage water falling into river Yamuna will be stopped.

Mentioning the Lakhwar multi-purpose project in the upper Yamuna basin, Mr. Gadkari added that once that project is complete, the Yamuna will flow without any interruption in Delhi. “For the same, trash skimmer is already deployed for Yamuna in Delhi for river surface cleaning,” he said.

Dr. Harsh Vardhan, Union Minister for Environment, Forests and Climate Change said that the 1,365-km long Yamuna, covering 22 km in Delhi is responsible for 80 per cent of the pollution in the river. He urged that a people’s movement is required to rejuvenate Yamuna and Ganga. He said,

Our ministry has collaborated with Clean Ganga Mission on issues like high-resolution survey of Ganga and real water quality monitoring to clean the river.

As per the panel that is monitoring the action plan to clean Yamuna, absence of sewer networks in unauthorised colonies in the national capital region is one of the biggest reasons behind the pollution in the river. Delhi currently generates 327 crore liters per day of sewage against the existing treatment capacity of 276 crore liters per day.

Delhi’s Chief Minister Arvind Kejriwal was also present during the laying of foundation stones and said that such programmes are very important for the federal structure of the country and that all governments should be on the same page for development issues.

Mr. Gadkari added that apart from Delhi, interventions for Yamuna cleaning are also being made in Haryana (Panipat and Sonepat) and Uttar Pradesh (Mathura-Vrindavan). “A sewage treatment plant project of 180 million litres per day (MLD) has also been approved in Agra,” he said.

Mr. Gadkari reiterated that The Ganga will be 70 to 80 per cent clean by March 2019, and it will be almost completely free of pollution by March 2020.

Toxic Materials In Idols Behind Spike In Heavy Metals In Yamuna After Immersion, Says The NGT Formed Committee