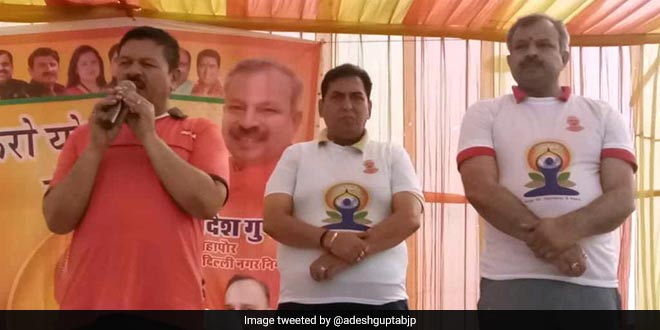 New Delhi: The Swachh Bharat Abhiyan, since its beginning in 2014, has stressed on the importance of behavioural change and how that will be the ultimate key to eradicate open defecation in India. Toeing similar lines, North Delhi Mayor Adesh Gupta on June 17 appealed to the people not to defecate in the open and instead use the toilets that have been made available to them by the North Delhi Municipal Corporation (NDMC). Speaking at a gathering at Ramjas Sports Ground, the mayor said that the civic body has done significant work to ensure that safe sanitation facilities are available for all, and people need not resort to unhygienic practices like open defecation.

NDMC ranked 279 out of 434 cities in last year’s Swachh Survekshan, and the rank for the civic body was attributed to its low availability of public toilets. Since then, availability of public toilets in areas under NDMC’s jurisdiction has improved. A total of 623 public toilet complexes are presently operational under North Delhi civic body, which include toilets built by the Delhi Urban Shelter Improvement Board (DUSIB). These have over 7,000 toilet seats for men and women. The civic body also has more than 300 public urinals, including urinals in petrol pumps, restaurants and metro stations. The mayor said that people should use these regularly as they are evenly spaced out, and can be accessed across all major locations throughout the North Delhi area.

The sanitation scenario in north Delhi has improved a lot in the last one year. With over 600 public toilet complexes spread across NDMC areas, people should not have problem accessing them. Though NDMC was declared open defecation free earlier this year, stray incidents of open defecation have been reported. People must understand that cleanliness can only be achieved if people start using toilets on a regular basis, said Madhup Vyas, Commissioner, North Delhi Municipal Corporation.

Information about public toilets and urinals has also been made available on Google maps, so that people can locate the toilets.

Instructions have also been given to restaurants, petrol pumps to give people access to their toilets.  The problem of many community toilets remaining shut at night is something the NDMC is still working on, with no potential solution in sight. A few community toilets are voluntarily manned at night, but these are toilets which have been taken over by any particular organisation and the people manning them at night are employed by those organisations. Others, remain shut at night and people forced to defecate in the open.

Mr Vyas said that keeping toilets open at night is something the civic body was looking into. The vast amount of money required to hire people to man toilet complexes at night is an expenditure the civic body has not been able to invest. Instead, it was exploring options of pay and use toilets and using the funds for maintenance, though nothing concrete has been materialised yet.

Also Read: North East Takes Yet Another Step Towards Its Swachh Goal, As Rural Mizoram Is Declared Open Defecation Free

Monsoon Is Both A Pollution Pump And A Cleanser, Says Study