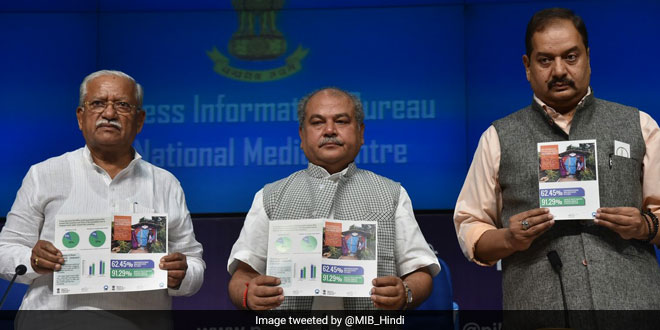 New Delhi: In a first, a swachhta competition has been kickstarted in rural areas under the Swachh Bharat Mission- Gramin (SMB-G) by the Ministry of Drinking Water and Sanitation. With an aim to improve sanitation coverage and solid liquid waste management (SLWM) and to push forward government’s Clean India Mission, all the 534 districts of India will be ranked under this Swachh Survekshan. The first round of the survey was carried out between May-June 2017 by the Quality Council of India (QCI) covering 4,626 villages and it was observed that the overall toilet coverage in these areas is 62.45%.

The progress report was launched today at the National Media Centre, Delhi by the Minister for Drinking Water and Sanitation Narendra Singh Tomar in presence of several dignitaries including Secretary Ministry of Drinking Water and Sanitation Param Iyer, Director General of Press Information Bureau Frank Noronha and the Chairman of QCI Adil Zainulbhai.

Our primary aim is to make the whole country Open Defecation Free by 2019. The work of increasing sanitation coverage has been going on in full swing in rural areas. I am pleased to announce that 91.29% of the people having access to a toilet use it and this is a huge achievement, said Mr Tomar.

The survey was carried out in 1.4 lakh households and the villages were scored out of 100 marked on parametres of ‘Performance (50%), Sustainability (25%) and Transparency (25%)’. Similarly other 2 lakh odd villages will be surveyed and the districts will be ranked and awarded at the end of each quarter. The first ranking will be announced on October 2, 2017 for the quarter July-September 2017.

A 15-day window was given to all the randomly selected villages and a team of 300 members from QCI were deployed to conduct the household survey. “Keeping in mind the strategy of ‘scale, speed and transparency, each house was marked on 4 elements – Toilet access, usage, presence of litter around the house and the volume of stagnant waste water around the toilets,” said Mr Zainulbhai, “Besides the door-to-door survey, direct observations in areas like anganwadis. Public health sectors, etc were also noted by the QCI team.” 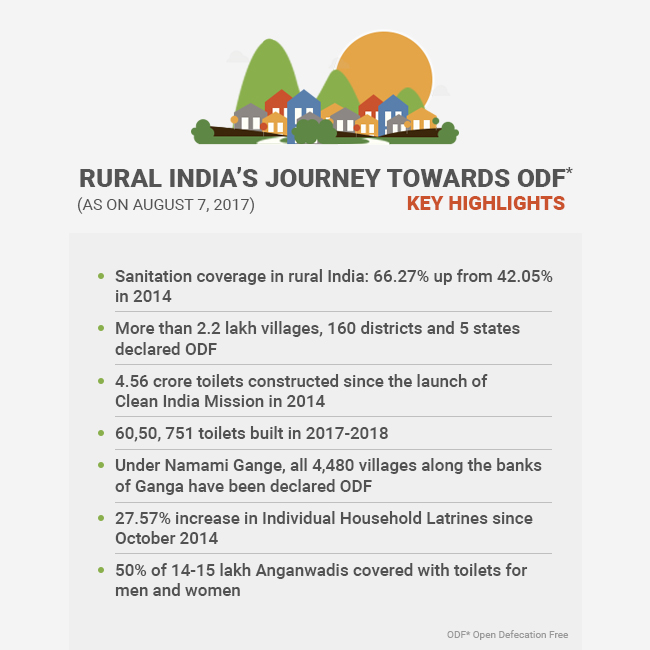 4289 Anganwadis and 1670 Public Health Centres were visited during the survey. Considering that rural areas will have its own challenges, especially in terms of using the toilet, the QCI team underwent rigorous training sessions added Mr Zainulbhai.

A wave of community involvement was noticed while the survey was being conducted, Community involvement played a key role which ensured good sanitation practices in these villages, said Mr Zainulbhai. He further went on to narrate two notable instances, In many villages of Uttar Pradesh we witnessed that brothers were coming out in large numbers and gifting toilets to their sisters ahead of the Raksh Bandhan festival. And in another instance we observed that children were playing a huge role in ensuring that the practice of open defecation is eradicated completely in their respective regions.

Mr Iyer highlighted a problem that a region faces after it is declared Open Defecation Free (ODF), “Sustainability of ODF is very crucial under the Swachh Bharat Abhiyan. The process of ODF isn’t a one time thing, it is a continuous process.”

To accelerate the march towards an ODF India, the government also launched social media-friendly ‘Mobisodes’. These are short 90-second videos that aim to spread awareness and increase community participation in Swachh Bharat.