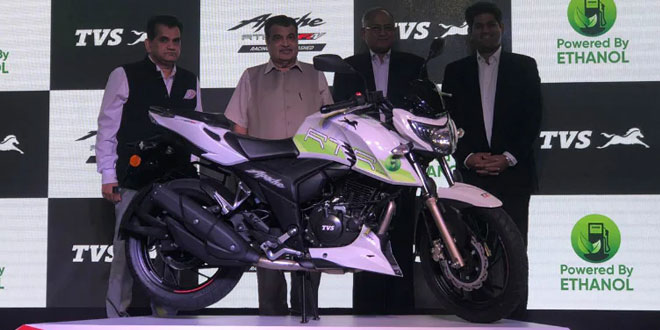 New Delhi: TVS Motor Company launched India’s first ethanol-based motorcycle on Friday in line with the government’s initiative to opt for green and sustainable future mobility solutions. Among those present on the occasion were Minister for Road Transport and Highways Nitin Jairam Gadkari and CEO of NITI Aayog Amitabh Kant. TVS Apache RTR 200 4V ethanol concept was first showcased at Auto Expo 2018 held in the national capital. TVS Apache is the flagship brand of TVS Motor Company with over 3.5 million customers across the globe. Company’s Chairman Venu Srinivasan said,

The two-wheeler industry is looking at green and sustainable future mobility solutions spanning across electric, hybrid and alternate fuels.

He said in a statement,

This is due to the easy compatibility in transition to ethanol and its sustained positive impact on the environment without compromising on performance and total cost of ownership.

The government believes use of ethanol as a fuel will also reduce dependence on the import of petroleum and increase energy security.

However, many industry leaders remain concerned by the potential repercussions of NITI Aayog’s approach of completely banning two-wheelers up to 150cc that are powered by internal combustion engines.

The government’s think-tank had asked Society of Indian Automobile Manufacturers (SIAM) and conventional two-and three-wheeler makers to suggest concrete steps towards the transition to electric mobility keeping in mind the 2025 deadline.