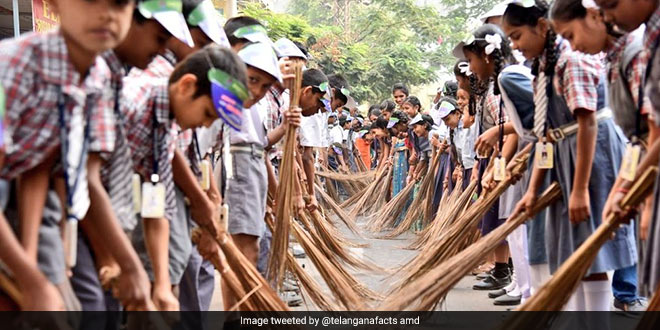 New Delhi: On Monday, city of Hyderabad made history, when as many as 15,320 students from various educational institutions along with State Home minister Naini Narshimha Reddy, Deputy Chief Minister Mohammad Mahmood Ali , Greater Hyderabad Municipal Commissioner B Janardhan Reddy and IT Minister KT Rama Rao participated in a clean-up drive and swept their way into the High Range World Records for a mass sweeping event. The agenda of the event was to spread awareness among citizens about government’s biggest cleanliness drive – the Swachh Bharat Abhiyan and to motivate people to keep their city clean and green and make sure their city perform better in the ongoing Swachh Survekshan, which for the first time is assessing all the 4,041 cities of India on their cleanliness quotient.

The mass sweeping event was held at BR Ambedkar College in Bagh Lingampally, sharing glimpses of the evenT with netizens IT Minister KT Rama Rao said,

Amazed at the level of enthusiasm of these children to participate in Swachh Survekshan.

I appeal everyone – from citizens to students, NGOs and Resident Welfare Associations (RWAs) to actively participate in Swachh Survekshan 2018 so that we bag the top rank.

Give a miss call to 1969, after dialing, the residents will be asked a series of questions on Hyderabad’s sanitation and cleanliness standards, all the citizens have to do is simply rate these standards.

This year, the city is gearing up to get a spot in top 10 cleanest cities of India.