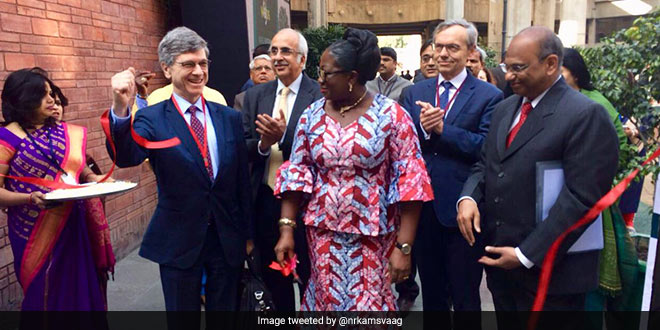 New Delhi: Norway is working to put sustainable use of oceans on the top of the international agenda, the country’s envoy here today said, exhorting the world to work together to check marine pollution. Ambassador of Norway to India Nils Ragnar Kamsvag made the remarks during his address at the opening of the three-day World Sustainable Development Summit, hosted by The Energy and Resources Institute (TERI) at the India Habitat Centre.

The envoy cited an incident from last year, when a whale was found on the west coast of Norway, with over 30 plastic bags inside her stomach, to underscore his point.

“Its (beaked whale’s) stomach and intestines were filled with large and small pieces of plastic. The images of this ‘plastic whale’, as it came to be known, became a symbol of us violating our natural habitat.

“This led thousands of new volunteers to clean up waste that was littering our beaches and fjords. Similar to the inspiring beach clean-up efforts at Versova Beach in Mumbai,” Mr Kamsvag was quoted as saying in a TERI statement.

The envoy said the garbage may have travelled the seas for a long time before being mistaken for food by the beaked whale.

“This means, we need to work together to solve this problem. We need international cooperation to make a difference,” said Mr Kamsvag.

The Norwegian government is working to put sustainable use of healthy oceans “on the top of the international agenda” to move this crucial issue forward, Kamsvag said. Incidentally, the Scandinavian nation will host the sixth ‘Our Ocean’ conference in 2019.

In the run-up to the conference, Norway intends to benefit from the insights generated by many ocean-related initiatives now underway. The ‘Our Ocean’ conference focus on the key ocean issues – marine protected areas, sustainable fisheries, marine pollution, and climate-related impacts on the ocean.

“Our Prime Minister, Erna Solberg, is establishing an international High-level Panel on Building a Sustainable Ocean Economy. The objective is to increase international understanding of how the sustainable use of the oceans can play a key role in meeting the world’s most vital needs in the years to come.

“The ambition is to make a significant contribution to achieving the United Nations Sustainable Development Goals. There is global momentum for the sustainable use and conservation of the oceans,” the Norwegian ambassador said.

He said Norway would like to encourage all of you, governments, research institutions, businesses and civil society to join the concerted effort and take action to develop a sustainable ocean economy.

What Happens When Over 15,000 Students Armed With Brooms Start Cleaning Their City? They Make A World Record!