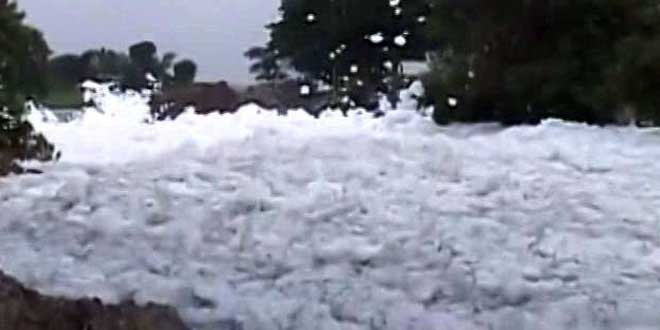 Bengaluru:  No problem, it happens every year, Karnataka’s Chief Minister Siddaramaiah has said, as Bengaluru’s Varthur Lake froths and shoots toxic foam at motorists passing by. Pre-monsoon rain has meant more froth in the past week and people driving past the lake on the arterial Whitefield Road have had a tough time evading the flying clouds of chemical.

People have also complained of a terrible stench in the area. City scientists have said the increased flow of water to the lake, which happens every time it rains, is responsible for the massive frothing, which scientists say is caused by years of dumping untreated sewage and pollutants.

The concerned minister as well as the BBMP is taking care of it. There’s no problem…We received unprecedented rainfall this year,” the Chief Minister said today, adding, “We will solve it…it happens every year.

Last Friday, the Karnataka government held a meeting to plan cleaning up the lake. But officials said the plan is likely to be implemented only after the government finishes work on another large lake, the Bellandur.

Bellandur and Varthur, Bengaluru’s two largest lakes have been frothing, and sometimes breaking out in flames, for several years. In February, the Bellandur lake, nearly 900 acres large, was covered with a fire, shooting streams of smoke into the sky and blinding drivers who pulled over to avoid accidents.

The fire fighters summoned were amazed at the scale of the fire, which raged for nearly eight hours, on a body of water.

The state government has sought help from foreign experts and some from Britain and Israel visited the Bellandur lake earlier this year. Chief Minister Siddaramaiah had visited the lake, located in the southeastern part of the city, to take stock of the cleaning process earlier this month.

The Karnataka government is racing against time to clean up the Bellandur; the National Green Tribunal has allotted it a month to do so. The state has said the time given is inadequate and the Rs. 3.35 crore-project, including clearing the lake of weeds, may take longer.

The authorities say they will set up more sewage treatment plants at the lake. Security cameras have also been installed to identify anyone dumping waste and those who do will be fined Rs. 5 lakhs, the state government has said.