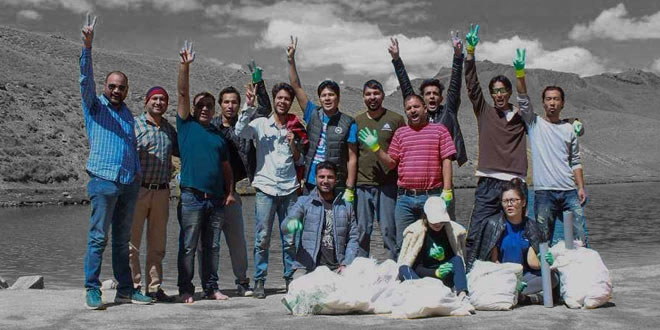 New Delhi: Tourism in the Himalayas and its rising  popularity along with trekking, has given rise to the problem of garbage disposal along the trekking routes. To save the nature, putting an end to trekking isn’t a viable option and keeping this in mind, a trekker’s group decided to make Swachh Bharat Abhiyan a vital part of their itinerary.

In 2015, when Pradeep Sangwan, a seasonal trekker could no longer witness the plight of trekking routes in Srikhand Mahadev and Kheerganga in Kullu district of Himachal Pradesh, he formed an organisation, ‘Healing Himalayas Foundation’ along with his fellow trekkers and decided to address the problem of garbage in a rather unique way. “All the garbage dumped along the trekking route eventually ends up getting mixed with the river or its tributaries thereby polluting them. Through trekking, our organisation conducts mass cleanups and holistic waste  management programmes to protect the environment from toxic effluents generated by plastic and general waste,” says Mr Sangwan. 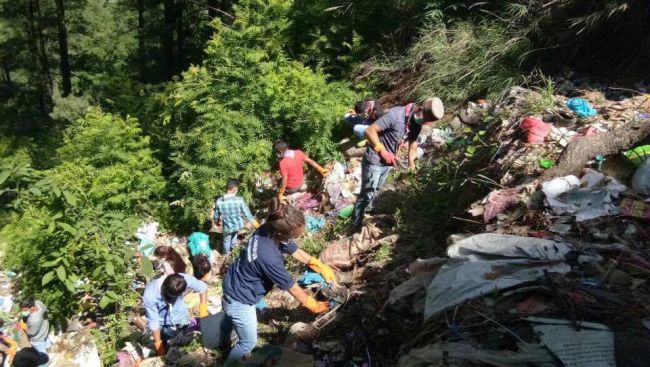 Like any other trekking expedition, you can enroll with the group. In 2-3 days of trek, the volunteers take you through the dense forests, natural hot springs of Parvati valley in Kheerganga. While going up to the mountain range, the team conducts cleanup drives, post which you can enjoy the hot water spring. After camping on the foothills of Himalaya for two days, whatever waste is generated, the trekkers segregate it into dry and wet waste. Besides the cleaning activity, the group has also undertaken activities like installing dustbins in neighbouring villages; distributing jute bags to the locals to store their garbage and dump all the waste collected in the nearby dumping yard. 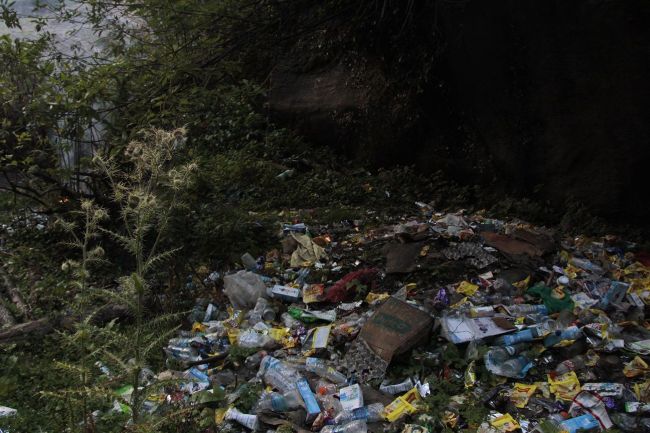 While it is difficult to educate the floating population of tourists and trekkers throughout the year, the Swachh warriors decided to make locals, tourist guides, alpine clubs and adventure tour operators major stakeholders in maintaining cleanliness in the Himalayan range. To make the process easier, the group adopted three villages – Mansari, Karjan and Soyal in Kullu district. Multiple initiatives are carried out by the volunteers – from educating children about waste management lessons, distributing jute bags to store dry waste, building public toilets, collecting waste once a week to clean the villages and maintain its beauty. 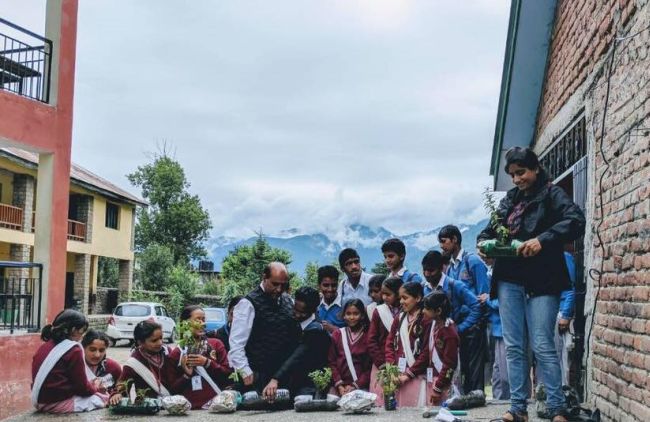 Mr Sangwan believes that education and awareness is very crucial to save the Beas river that passes through each of the three villages, “Like in urban areas, these villages do not have civic workers coming on a regular basis to pick up waste and hence most of the garbage is discarded into the tributaries that pass through these villages. Eventually these tributaries meet the main river Beas and pollute it.” 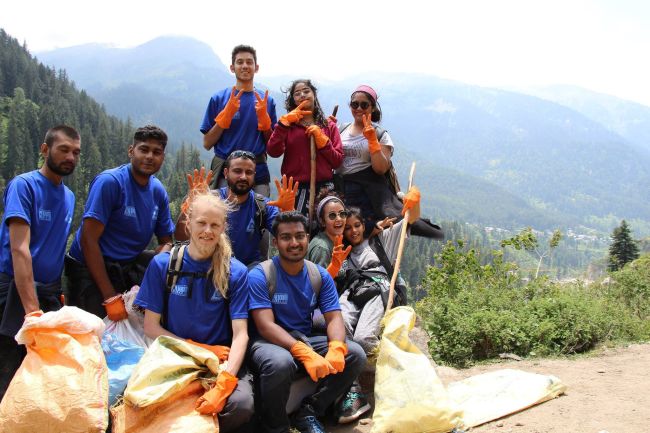 The trekkers have made Swachh Bharat Abhiyan part of their itinerary

The organisation aims to make all three villages plastic free, “We also conducting workshops for the villagers where we teach them how to recycle or upcycle plastic waste as majority of the waste that we collect is plastic,” adds Mr Sangwan.

Shrikhand Mahadev Yatra, considered as one the five most important Kailash yatras in the world takes place in July-August every year where thousands of devotees from across India participate. “In past 2-3 years we noticed an upsurge of garbage that used to get accumulated post the yatra. Like every year, in 2016 we took part in the yatra but with a purpose,” says Mr Sangwan. 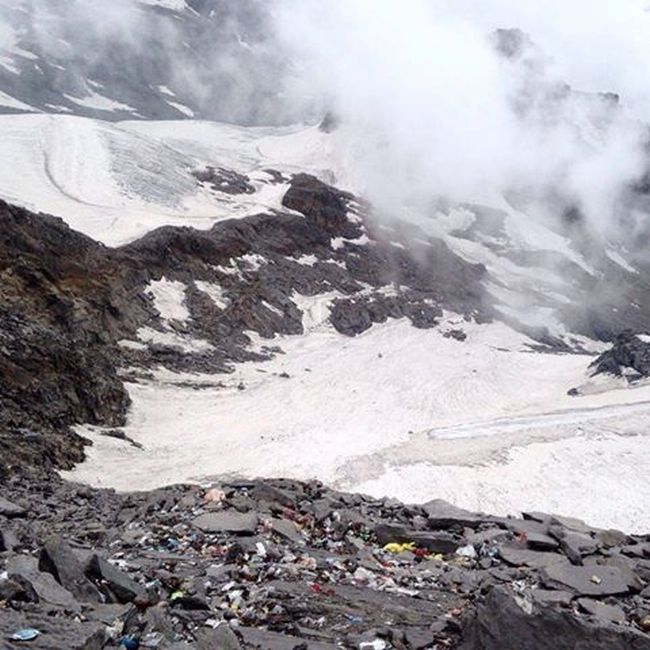 Despite various challenges like passing through 50 feet thick layer of snow, crossing several glaciers, avalanches, trekking on steep mountain paths and low oxygen levels, the trekkers took upon the task of cleanliness. 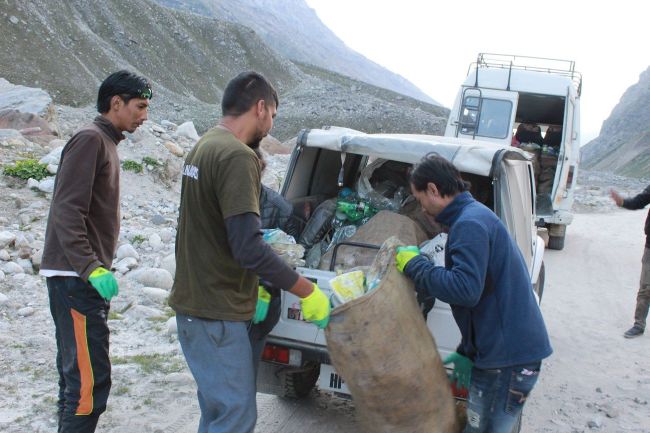 On August 18, the team organised a cleanliness drive post the yatra and collected nearly 11 sacks of garbage. This year 21 volunteers carried out the trek cum cleanliness drive before and after the yatra. Volunteers trekked for 70 kilometres at an Altitude of 5,100 metres and at the end of the Swachhta drive they were successful in removing 250 kilos of plastic waste. “Several tributaries of Sutlej River are situated alongside the route taken for the Yatra and most of the discarded trash ends up in the river. Hence, we decided to clean major camping sites including Barati Nala, Thachru, Bheemdwari and Nainsarovar that were full of garbage that majorly included plastic bottles, wrappers, discarded clothes, shoes and umbrellas by the pilgrims,” adds Mr Sangwan. 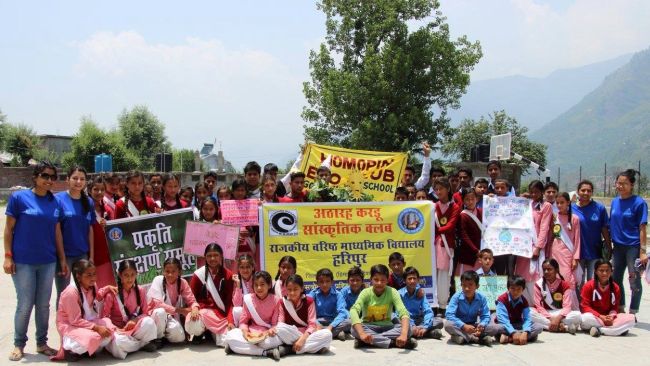 Besides the two main trekking routes of Kheerganga and Shrikhand Mahadev, the group has also carried out cleanup activities in Chadrataal Lake in Spiti district, Jogni waterfall in Manali and the famous Hadimba temple in Manali.

Mr Sangwan believes that along with promoting tourism in Himalayan range, the government must also focus on and promote, ‘Responsible Tourism’ and make tourists and trekkers realise the extent of damage they are causing the nature by littering the trekking routes, “There is no point in coming close to the nature if you are indirectly destroying it. An attitudinal change must be brought about soon if we want our picturesque Himalayas to remain safe,” signs off Mr Sangwan. 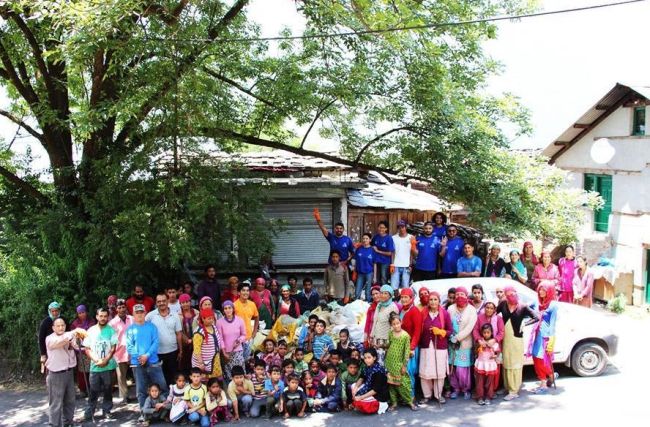 Gulaab Gang Returns, This Time To Fight Against The Ugly Practice Of Open Defecation In Karnataka