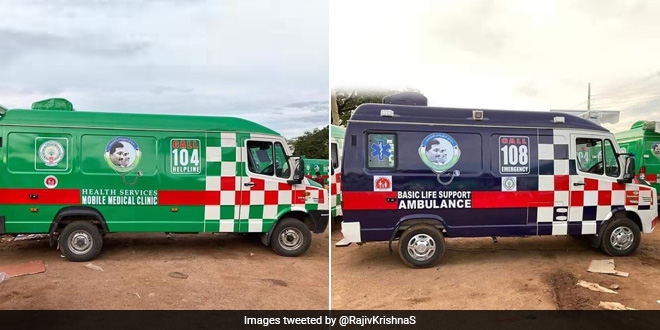 New Delhi: In an effort to save lives and provide quality medical care to every citizen of Andhra Pradesh, on Wednesday (July 1), Chief Minister YS Jagan Mohan Reddy flagged off a fleet of 1,088 ambulance vehicles parked in four rows from Benz Circle to Raghavaiah Park in Andhra Pradesh’s Vijaywada. 1,088 vehicles have been divided into two categories – mobile health units (MHUs) and state-of-art ambulances which are referred to as 104 service and 108 service respectively.

Also Read: How Andhra Pradesh Has Been Fighting Against Coronavirus And Is The State Prepared For The Upcoming Peak

Out of 1,088, 656 are MHUs and 432 are ambulances. 104 and 108 is the toll-free number to access the services provided by MHUs and ambulances in both urban and rural areas of the state. Talking to NDTV about the 104 service and how it will improve access to healthcare in villages, PV Ramesh, Additional Chief Secretary to the Chief Minister said,

656 MHUs have been allotted to mandals (a cluster of about 30-40 villages); one per mandal. The main aim of the 104 service is to form a link between the primary health centres and villages. It is based on the National Health Service of the United Kingdom wherein every 5,000-10,000 people have a family physician. Similarly, here in Andhra Pradesh, a doctor from a primary health centre will go in the vehicle and address the healthcare needs of people living in villages. The doctor will provide antenatal care, immunisation, post-natal care, and health check-up. There are chronic diseases that don’t get treated but with MHU, people will get medicines at the doorstep.

Mr Ramesh also informed that the government is setting cloud-based health record system as part of which the medical history and the current treatment of every patient will be uploaded on the server. If a patient is referred to another doctor, this data will help the doctor in understanding the case.

If I have got a blood test done a week ago, the new doctor I’m referring to can simply see that report on the server rather than asking me to undergo a test again. This will provide a continuum of care, sustainable health care, and reduce healthcare cost, said Mr Ramesh.

The remaining 432 ambulances (108 service) have been launched in three categories – basic life support, advanced life support and neonatal support. The aim of the 108 service is to provide emergency care and supplement the existing 336 ambulances.

Out of 432, 26 ambulances have been dedicated to providing neonatal support, 104 are equipped for advanced life support and 302 are meant for providing basic life support.

26 of them will essentially serve neonates (a child under 28 days of age) and have been allotted two per district. They will be stationed at two different central locations in the district so that they can be mobilised very quickly. The idea is to reduce infant mortality rate.

104 ambulances with advanced life support such as ventilators are placed at locations that have a higher propensity for accident deaths and deal with emergencies. The remaining 302 will have basic life support equipment.

While ‘104’ vehicles are painted green in colour, ‘108’ have got a blue colour. Mr Ramesh informed that MHUs used to exist five to six years ago on a modest scale but later the services stopped. Now, the project has been renewed and 1,088 vehicles have been launched at a cost of Rs. 200 crore.

National Doctor’s Day: ‘Violence Against Us Breaks Our Heart’, Medics On Violent Incidents Against Them During Pandemic