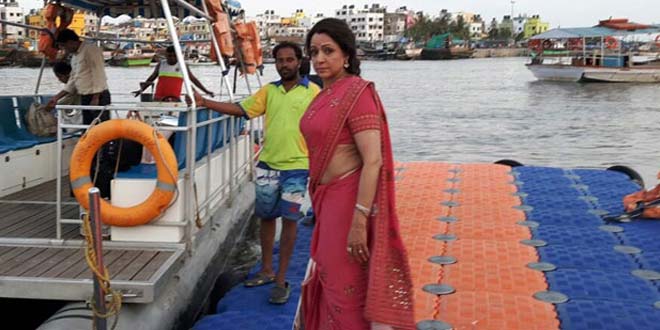 Veteran actress and politician Hema Malini has hailed the government and people of Madhya Pradesh for maintaining the beauty of Narmada River.

Read: Delhi’s Waste Is Responsible For Killing All Aquatic Life In Yamuna River

In a series of tweets, she praised the cleanliness of the banks of the Narmada, where she is currently shooting.

Hats off to the govt & ppl of MP who have maintained the beauty of the Narmada & are carefully preventing any deterioration of the river.

Shootg here on the banks of the beautiful Narmada!Wht serene beauty,no garbage pile up on the banks everythg clean as far as the eye can see

She also compared it to the Yamuna, tweeting that work has already begun cleaning up the river.

My mind’s eye is comparing ths beauty to my Yamuna, struggling to flow amidst all the pollution in Mathura Vrindavan. Wht a contrast!

Work hs already started on ths massive project &has been inaugurated with the Yamuna in Mathura.Dream of the ppl here will be fulfilled soon

Hema Malini, star of films such as Sholay and Seeta Aur Geeta, is currently BJP’s Lok Sabha member from Mathura.