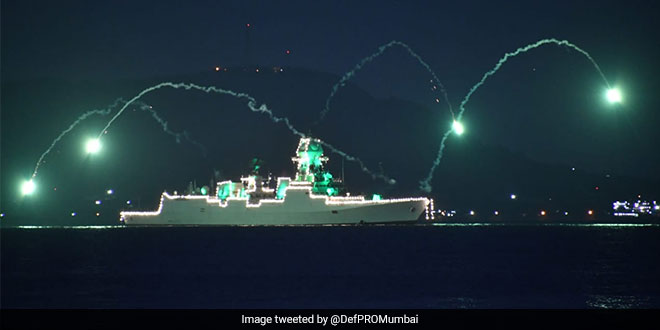 New Delhi: In a historic event, the Indian armed forces paid their tribute, acknowledging the efforts of the frontline fighters of the novel coronavirus in India. From Air Force to Indian Navy, the soldiers are doing their bit to pay respect to the coronavirus warriors. On Sunday (May 3), the Air Force jets and transport planes showered petals on hospitals and places of national importance across the country. On the other hand, the Indian Navy and Indian Coast Guard switched on decorative lights installed on their ships, to honour medical professionals and others involved in fighting the pandemic.

The gesture of gratitude started with laying flowers by the three service chiefs at the police memorial in Delhi on Sunday morning to honour police personnel deployed to enforce the nationwide lockdown to control the spread of COVID-19.

Fighter jets also conducted a flypast over the Marine Drive and dropped petals over the King Edward Memorial Hospital and Kasturba Gandhi Hospital, among others. A similar exercise was conducted in Bengaluru, Srinagar, Chandigarh and Lucknow.

In the evening, on the deck of India’s aircraft carrier INS Vikramaditya, a green boxing glove symbol was seen punching a circle of red lights, which were made to look like the coronavirus.

Following which the Western Naval Command illuminated five ships off the Gateway of India in Mumbai. The Southern Naval Command ships anchored in the centre of the Ernakulam channel in Kerala as well as Chennai and the Coast Guard’s ships stationed at Port Blair in the Andaman and Nicobar Islands also switched on their ceremonial lights and blew siren.

Praising these gestures, Prime Minister Narendra Modi took to twitter and shared a video montage of the day’s flypast and health workers with masks clapping as petals fall on them. He said in the tweet,

Saluting those who are at the forefront, bravely fighting COVID-19. Great gesture by our armed forces.

Saluting those who are at the forefront, bravely fighting COVID-19.

Also Read: Doctors Give A Thumbs Up To The New Guideline On ‘Home Isolation For Mild Cases’, Says It Will Ease Burden On The Healthcare System

How Did India Fight An Earlier Pandemic The Swine Flu Outbreak In 2015?