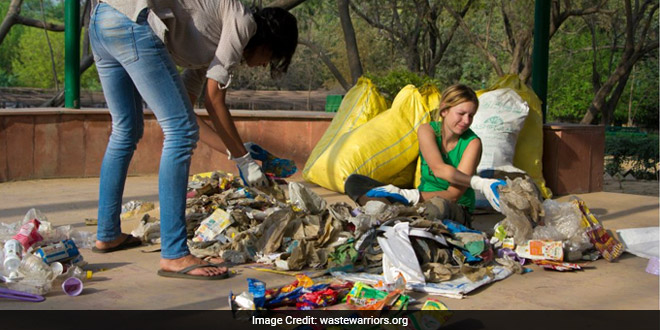 Dharamsala: Himachal Pradesh Chief Minister Virbhadra Singh has promised funds to ‘Waste Warriors’, a group which has been clearing trash in Dharamsala since 2009, after they said that handling “mountains of waste” was getting difficult due to a financial crunch.

The group, headed by Briton Jodie Underhill, also known as the ‘garbage girl’, approached the Chief Minister seeking funding to continue the clean-up drive in villages in the vicinity of Dharamsala, the abode of Tibetan spiritual leader the Dalai Lama.

“Met the renowned ‘garbage girl’ at the Dharamsala circuit house this morning,” Mr Singh posted on Facebook on Saturday.

“I have been told that her organisation has been maintaining the cleanliness on the famous Dharamsala-Triund trek route. Jodie told me that the group was planning to shut down their operations due to lack of funds.”

“Promised her all possible help and directed officials to immediately release funds,” he added.

Underhill told IANS: “Due to a 1,000 per cent increase in the number of tourists over the years, the garbage is becoming increasingly difficult to manage and the costs have inevitably increased.”

The ‘Waste Warriors’ group has collected and processed over 4,223 tonnes of waste dumped by trekkers and tourists in the mountains from Bhagsunag and Triund.

It also runs a door-to-door collection and maintains the cleanliness of public places in Bhagsunag.

The group has installed and maintained dustbins; carries out educational and awareness raising activities; and conducts weekly clean-up drives.

It also has projects in Dehradun and around the Corbett Tiger Reserve in Uttarakhand.

The funding proposal of the ‘Waste Warriors’ was handed over to Deputy Commissioner C.P. Verma by the Chief Minister’s Office to ensure adequate funding, a government functionary said.

The Punjab National Bank has covered the capital cost of the project up to ₹2.2 lakh.

Related Topics:
Garbage
Up Next

582 Gram Panchayat Members Get Notice For No Toilets At Home