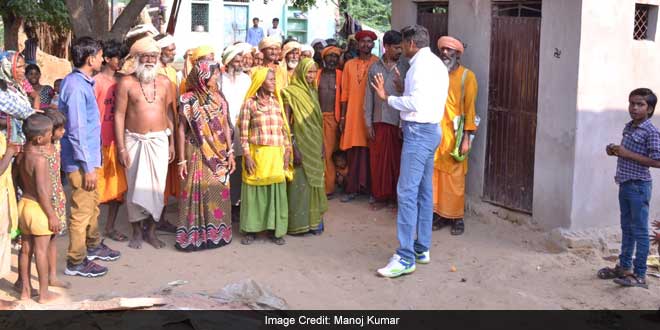 Everyday Tejan Chandaliya makes the 30 kilometres trek from Natho Ka Bas village to Dholpur, where he works at a tea shop right outside the Zilla Parishad Office. For years, it had become a ritual of sorts to stop en route, to defecate in the fields on his way to work. Little did he know that it would take merely 35 days for a generations old unhygienic practice to change.

Till 3 months ago, there was not much to differentiate between Natho Ka Bas village in Rajasthan’s Dholpur and many other villages in India. Houses made of mud with hay roofs greeted people in this village. All 70 families that lived here are below the poverty line, and the men in the village earn a living by dressing up as devotees and travelling to different corners of the district to beg or work as daily labourers. The Naths have historically a nomadic tribal group, where male and female members often move out of the village in search of a better livelihood, but comes back to what they call their home.

But home isn’t home without proper sanitation facilities, and Natho Ka Bas had its own sanitation issues. Open defecation was rampant and women were scared and discouraged to defecate in the open post sunset, as that would make them vulnerable to violent incidents. Women would defecate in groups in the early hours of the morning, and would often hold from relieving themselves in the evening or night. Poverty, illiteracy and landlessness have been constant companions for these villagers and their daily battles with these problems left them with little time to think about issues of proper sanitation and hygiene.

For us, earning by begging and sustaining a livelihood is such a day-to-day struggle, that we never gave any importance to the necessity of toilets. We all grew up defecating in the nearby bushes and were never asked to think of an alternative, said Tejan.

All of this changed in 35 days, as 70 toilets were built in the village, courtesy the collaborative effort of the villagers and the district administration.

It was initially difficult to explain to these people the benefits of toilets, since they had never used any. Since many of them spent a lot of time outside the village, they were reluctant to spend so much effort in constructing toilets at home. But when we stressed on the safety aspects of having toilets at home, especially for women, the villagers gradually realised that having functioning toilets was indeed necessary, said Manoj Kumar, District Project Coordinator for Swachh Bharat Mission.

During the five days of training conducted by the district administration, the villagers were adequately trained on toilet construction, toilet usage and waste disposal. But the most important part of the training was educating the villagers about the evils of open defecation and how this practice harms the personal and social health of a community. 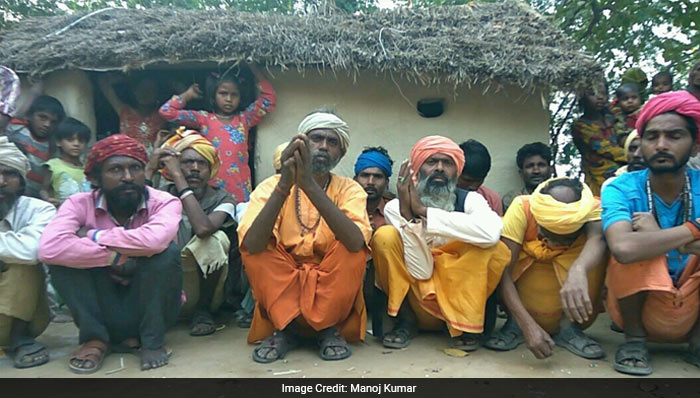 Open defecation had become synonymous with the villagers’ lives

A community led total sanitation (CLTS) approach was undertaken to begin the construction of toilets so that the villagers could involve themselves towards transforming their futures. The villagers unanimously decided that it was time to end open defecation, and started digging holes themselves, gathering necessary building materials and commencing the construction work. On completion of the toilets, the villagers received the allotted Rs 12,000 per toilet from the Centre in no time.

It took 35 days for Natho Ka Bas to wear a new look, with toilets present for each of the 70 families in the village. The toilets ensured that a generations old practice was put to end by a collaborative effort between the villagers and the administration. 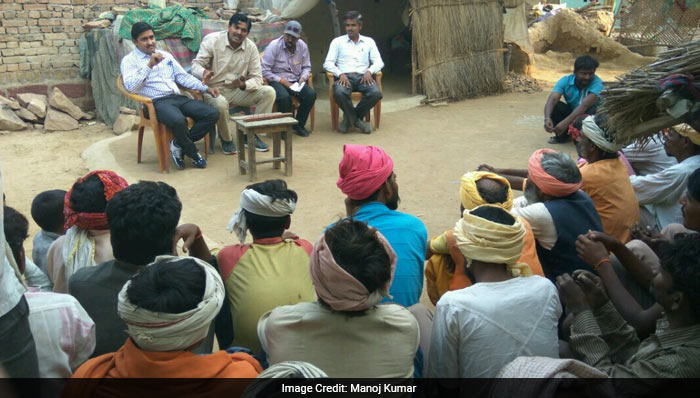 Despite the extreme poverty, barely any regular income and no land of their own, it is very brave and commendable of the villagers to end open defecation. They have every day issues to take care of, but they decided to come together and end the problem of open defecation, once and for all, said Manvendra Singh, Chief Planning Officer, Dholpur.

The presence of toilets in the village also changed the outlook of its inhabitants. The villagers keep a lookout in neighbouring villages and in case they come across a household without toilet, they spread the Swachhta message and ask the household members to construct a toilet. Having toilets in individual households has also increased the social status of the village in the district. The village is gradually getting famous for its incredible achievement.

Having a household toilet also impacts the social status of an individual. This benefits us towards achieving open defecation free status, as a house without a functioning toilet is compelled in building one, when it is surrounded by houses with proper toilets, said Kumar.

Since the beginning of the Swachh Bharat Mission, the rural sanitation scenario in Rajasthan has seen improvement at a snail’s pace. Only 46 per cent of Rajasthan’s villages are open defecation free. Many districts such as Barmer and Pratapgarh have less than 50 per cent toilet coverage in villages. But gradually, the picture is changing. In Dhonde gram panchayat alone, nearly 900 families spread across 12 villages have built toilets for themselves. The district administration followed the same approach of CLTS for all the villages and helped construct more than one lakh toilets in the last 3 months.

The community acts like a family during the construction of toilets on a large scale. The community leader has to be motivating and convincing. Most importantly, we always encourage the involvement of women in the process of toilet construction. It encourages them to come forward and allows them to put their grievances and issues on the table, said Singh.

The district administration is also confident that if people become habituated to using toilets, the problem of open defecation will rapidly come to an end. Since household toilets also end health risks associated with open defecation, the villagers of Natho Ka Bas didn’t take long to adjust to the newer and healthier system of relieving themselves.

We are trying to reach out to the villagers with the message of toilet construction but not in a traditional way. We are stressing on the health benefits of having a toilet, how the dignity of the household’s womenfolk is not at risk if there’s a toilet at home and how one’s social status escalates a bit if there’s a toilet at home. Many villagers began constructing toilets keeping in mind these factors, said Kumar.