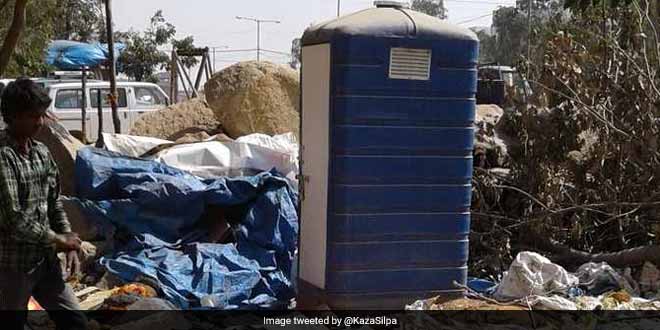 On August 16, 2017, when Hyderabad was declared open defecation free (ODF), the achievement marked a significant success for the urban wing of the Swachh Bharat Abhiyan. All of Hyderabad’s 150 wards were declared ODF by the Greater Hyderabad Municipal Corporation (GHMC), More than 1,450 public toilets were built by the GHMC as a part of the Swachh Bharat (Urban) initiative. Post the ODF declaration however, the city’s civic body faces a crisis in terms of maintenance of public toilets, as many toilets are dirty, unhygienic and regularly running out of water.

In many parts of the city, even newly constructed toilets remain shut as the GHMC has not appointed anybody for maintenance. Non-maintenance of the toilets, along with absence of water has resulted in many toilets becoming unclean and unhygienic, defeating the very purpose for which these were constructed. In areas near Secunderabad, toilets which were constructed a few months back had to be shut down due to these becoming unfit for usage.

There are several reasons for the crisis that city’s public toilets are facing. The primary reason is the GHMC’s inability to ensure water and cleaning staff in many toilets. Where the municipality has managed to assign cleaning staff those have found users as they are cleaned on a daily basis by sanitation workers compared to the unmanned ones.

The announcement of becoming ODF came with much fanfare but within less than a month, the GHMC is struggling to cope with the number of unmanned and waterless toilets. This is what happens when civic bodies only think of targets and numbers, without proper planning. During construction of toilets, the GHMC should have also hired enough people to clean these toilets regularly, said Professor R Venkaiah, Academic and sanitation expert, Hyderabad Central University.

Absence of regular water supply makes it even more difficult to maintain the cleanliness of toilets. The GHMC stated that it was still working to provide 24×7 water supply to all the newly constructed and existent public toilets but limited water supply in several areas resulted in many public toilets getting inadequate to zero water supply.

It is bizarre for the city municipality to declare itself ODF without ensuring continuous water supply across all the public toilets. It is known that public toilets are highly important in urban spaces are thousands of people use them daily. The municipality has effectively made sanitation a problem for people who use public toilets by making such toilets functional without continuous supply of water, said Professor Venkaiah.

In an effort to maintain the status of some public toilets, the GHMC is planning to hand them over to private agencies for maintenance. Private agencies would be in complete charge of cleaning some of the city’s toilets, and will take a part of the revenue generated from such toilets. The plan is on track to being implemented by the end of August.

Private agencies can hire sanitation workers and employ them in charge of maintaining some of the city’s toilets. They can also store water in tanks at some toilets to deal with the water crisis. The Swachh Bharat Abhiyan is modeled as a private-public initiative and if handing over some of the public toilets to private agencies reduces the burden on us, then it’ll be better for the city, said T.K. Sreedevi, Director, Municipal Administration, GHMC.

GHMC embodies both success and failure in implementation of Swachh Bharat’s objectives. Its efforts to construct over 1,400 toilets in a city which was woefully short of public toilets is laudable but looking at the overall picture, the effort seems to have not paid off, as much as the municipality would have expected to. Targets are necessary, but civic bodies like GHMC must remember that it is equally important to build toilets which are 100 per cent functional. Failing to do so only creates bigger problems, as having a toilet and being unable to use it is much worse than not having a toilet at all.