New Delhi: Imagine a project of Swachh Bharat Abhiyan scale where the challenges of convincing people to give up open defection, build toilets and actually use them seem daunting enough, but the district administration of Giridih district in Jharkhand had to grapple with other bigger issues. With sanitation coverage of just 62 percent the district was facing shortage of trained masons, to construct toilets in 2017. The district administration conducted several rounds of Raj Mistry (mason) training, yet the speed of construction remained sluggish as there was a shortfall of trained masons. Also adding to the problem was that, majority of the local masons seemed far more interested in taking up more lucrative construction activities rather than building.

To ensure that there are sufficient masons available to continue the toilet construction activity, the district officials then planned to create a pool of women masons, also called Rani Mistris.

Talking about the shortage of masons, the water, sanitation and hygiene specialist from UNICEF Kumar Premchand said, “In Jharkhand, there are many districts which have acute shortage of masons to work as part of the Swachh Bharat Mission – Gramin. Even after many rounds of training, the district was not able to match the requirement. So, all the stakeholders decided to create a pool of women masons.”

“To convince women and member of SHGs (self-help groups) to get trained and work as masons was a difficult task… as traditionally it was the men who worked as masons, also called Raj Mistris while women would support them as unskilled labourers. Fortunately, the programme was well accepted by the Jharkhand State Livelihood Promotion Society (JSLPS), which reached out to women in the blocks of Dumri, Pirtand, Birni and Jamua, where JSLPS has a prominent presence, and motivated the women to undergo training to become a mason,” said Akash Ganguly, Zila Swachh Bharat Prerak, Giridih.

How the training of Rani Mistris was organised and conducted

The training was conducted over four days, covering theoretical orientation on the first day and practical training for the rest of the three days. During the training programme, all technical aspects of constructing an individual household toilet were covered in detail.

The trainees were divided into groups of five, each of the groups had to construct a toilet on their own. They were also provided certificates on the completion of the training. During this initiative, over 300 Rani Mistris were trained to construct toilets on their own.

‘Rani Mistris’ on the job

The women masons have now been engaged at field level across the district and are contributing actively towards the fulfilment of the goals of the Swachh Bharat Mission – Gramin from the past two months. In addition to constructing toilets, they are also motivating other women to join in and eliminate the menace of open defecation by constructing toilets. 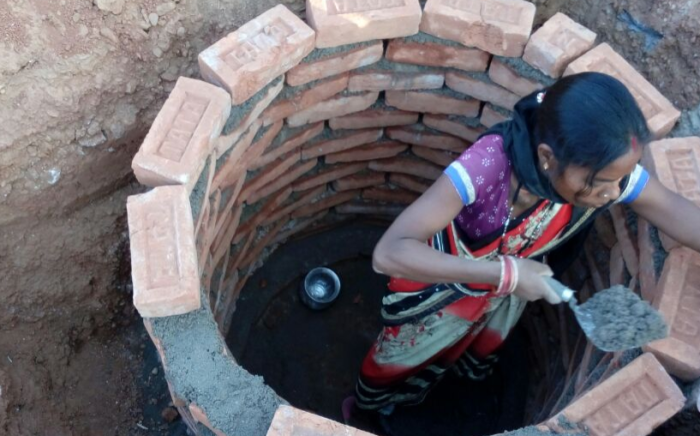 While paving the way for women empowerment, this initiative has helped strengthen the mason pool of the district. Considering most of these women belong to the marginalised communities; their participation in economic activities such as construction of toilets is enabling them to successfully sustain their families without being dependents.