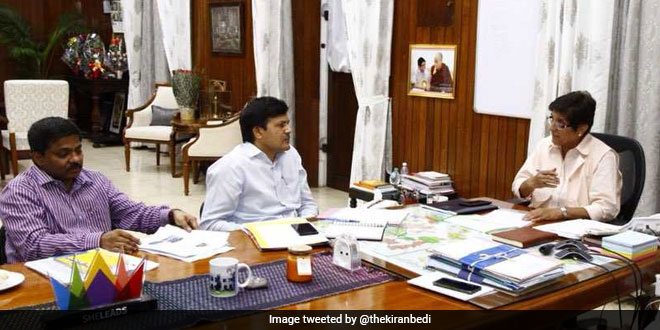 New Delhi: It was a long and strenuous working day for Mr C. Ganache on Friday April 27. Mr Ganache, who is the director of the Puducherry based research think tank Centre for Environment and Agricultural Development, came back home post attending a series of meetings on rural sanitation in the Union Territory. Next day, a laidback Saturday morning soon turned hectic with a series of phone calls between Mr Ganache and his colleagues, as it was announced by Puducherry Lieutenant Governor Kiran Bedi that families below poverty level will no longer get free rice if they did not make their villages open defecation free (ODF) and remove every signs of garbage. Announcing her decision on Twitter, Ms Bedi also wrote to Puducherry Chief Minister V Narayanaswamy, setting May 31 as the deadline for all villages to become ODF.

Though the order was revoked by Ms Bedi within a span of nine hours, the coercive nature of the order was not well-received. Ever since the Swachh Bharat Abhiyan began in 2014, allegations of coercion have emerged from several states. In August last year, six people were allegedly arrested in Rajasthan’s Bhilwara for defecating in the open. In Rajsamand district, of Rajasthan the district administration had allegedly block rations till all the villages in the district finished construction of toilets. Allegations of coercion by officials have also come from Madhya Pradesh, Uttar Pradesh and Chhattisgarh, where denial of ration to people is often the most common move by officials to coerce residents into building toilets. Neither the Swachh Bharat Abhiyan guidelines, nor any directions from the Ministry of Drinking Water and Sanitation mention any coercion or penalty for not building toilets as that would hamper the behavioural change that the sanitation mission is attempting to bring in. Why is it then, that instances of coercion are common when it comes to implementing Swachh Bharat Abhiyan’s objectives?

In four years, the sanitation coverage in Puducherry has reached only 61 per cent, which is a cause of concern for the government. Maybe the Lieutenant Governor realised that the sluggish progress may result in the Union Territory not meeting its ODF goal by October 2019 and gave an order which will force people to build toilets. But for a mission which aims to uphold human dignity, such orders are in direct contrast to its spirit, said Mr C. Ganache, Director, Centre for Environment and Agricultural Development, Puducherry.

Not just during the launch of the Swachh Bharat Abhiyan in 2014, but in the four years that followed, Prime Minister Narendra Modi has repeatedly spoken about how the mission is aimed at ending the unhygienic practice of open defecation and along with it, give a sense of dignity to all those who had been forced to defecate in the open for years, especially women. A few weeks back, the Prime Minister felicitated a number of Swachhagrahis at Bihar’s Champaran for their work in improving rural sanitation in their respective villages. None of the instances of eradication of open defecation involved coercion.

The problem with such coercive orders is that instead of a transition in people’s behaviour from defecating in the open to using toilets while understanding the necessity of sanitation, people may begin constructing toilets for purposes not at all related to sanitation, such as not to get punished or to continue availing welfare benefits. That defeats the whole purpose of the Abhiyan, which has advocated the necessity of behavioural change since day one, said Susmita Sengupta, Programme Manager, Water and Sanitation, Centre for Science and Environment.

Ever since reports of alleged coercion emerged from Rajasthan and other states, several sanitation experts weighed in on how coercion can affect the issue of sanitation. Like many social problems, lack of proper sanitation facilities in India is associated with several other factors of caste, poverty and economics. The Swachh Bharat Abhiyan, by engaging local administration and population to build toilets addresses these problems along with providing solutions for better sanitation. Experts, like Tarini Mathur from India Sanitation Coalition feel that coercion simply scares people into building toilets and does not instill in them a habit of using or maintaining them, which almost guarantees that they will not be using them in the long run. Experts have also said that the continuous pressure of deadlines often result in officials taking drastic measures to simply ask people to build toilets and meet the target. Whether people are using them or not becomes a secondary concern.

Even if people agree to build toilets initially due to fear of punishment or losing out on welfare schemes, that alone cannot sustain long-term sanitation goals. People must willingly use toilets and take responsibility to maintain them for the mission’s ODF goals to sustain, said Tarini Mathur, Programme Manager, India Sanitation Coalition.

When coercion allegations from Rajasthan had emerged last year, the state’s Ministry of Rural Development had clarified that it did not pass any order encouraging local administrations to arrest or stop ration supplies in case toilets were not being built. Given that the national ODF deadline is still one and a half years away, there is ample time for state governments to focus on non-ODF areas and bring in change. As experts suggest, the government may want to look beyond deadlines and look at ensuring proper sanitation behaviour among people, as not doing so may result in large scale relapses of open defecation that may be far more difficult to undo.

Back To An Uncertain Future: In Bihar’s Gaya, A Water Crisis Has Led People To Go Back To Open Defecation