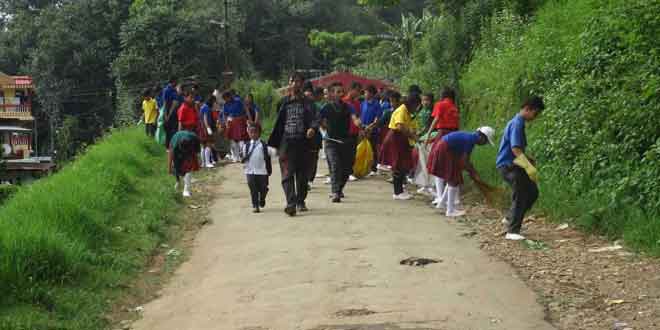 For India to be cleaner and a better country in terms of waste management and garbage disposal, it is important to impart values of environmental decency to the next generation. Schools and colleges can become learning spaces for students to understand the importance of cleanliness, as well as learn how to adhere to garbage disposal norms. This is precisely why 25 schools and colleges in Meghalaya’s Nongstoin, in the state’s West Khasi Hills, have together decided to keep an hour allotted on Fridays to conduct weekly clean up drives in the town and keep the area clean and garbage free.

It was on the occasion of World Environment Day on June 5 that the district administration had initiated the plan of bringing students together to arrange for a cleanup drive across Nongstoin. The idea was to introduce to children the concept of cleanliness and the importance of keeping public spaces such as parks, markets, roads clean and garbage free. The cleanup drive was a part of the students’ Socially Useful Productive Work (SUPW) curriculum. Being a part of their curriculum, the schools have also decided to mark the students on the basis of their participation and cleanliness performance. The district administration demarcated a particular zone for each school and requested them to focus on the cleanliness of the allocated zone.

The Swachh Bharat Abhiyan is about participation. The more people participate, the cleaner our streets and public spaces will become. Students participating in the cleanup drives can not only carry on the initiative for long, but are also learning about the importance of not littering and waste segregation, which are important learning experiences, said Arunkumar Kembhavi, Deputy Commissioner, Nongstoin.

To encourage the students the district administration provided the students with bamboo brooms, bamboo baskets (locally known as koh), spades and garbage collection bags under the Chief Minister’s Youth for Green Campaign scheme. The Youth for Green Campaign was launched in 2012 as an initiative to maintain cleanliness in public spaces and surroundings in collaboration with schools, colleges, NGOs interested in chalking out cleanliness programmes. Instead of a single instance of cleaning up a particular street or a park just once, the administration wanted this initiative to be a regular affair where student participation would result in them becoming agents of Swachhta. 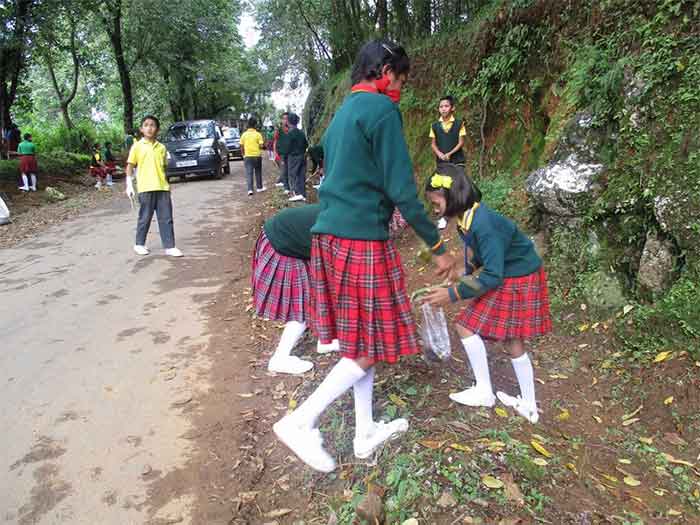 Initially, the students required some coaxing by the district administration as well as their teachers. But once they picked up the brooms and the bins, there was no looking back. Before the cleanliness drives commenced, students were given instructions about what their roles would be and how to go about the cleanliness drive. Students were specifically asked not to touch wet or hazardous waste and concentrate on the collection of dry waste. They were also requested to go about their cleanliness campaign without disturbing the general public and causing traffic disruptions. The district administration arranged for vehicles that would collect the garbage and shift it to the nearest Solid & Liquid Resources Management Project (SLRM) centre, which has been designed to dispose waste scientifically.

If we take the example of Japan, many schools do not have sweepers or janitors. The students are encouraged to clean the surroundings themselves and taught that such work in not below their dignity. Our students need to understand the same about keeping their surroundings clean, said Mr. Kembhavi.

The cleanliness drives kept taking place on subsequent weeks after World Environment Day. Even in its third week, the response from students did not die down, something the district administration viewed very positively. Seeing the students’ response, the district administration requested them to become Swachh Bharat ambassadors, who would spread the message of cleanliness among general public. The students will request roadside vendors to put dustbins in their stalls for people to dispose garbage. The administration has also installed hundreds of public dustbins in Nongstoin for people to use instead of disposing garbage in streets. 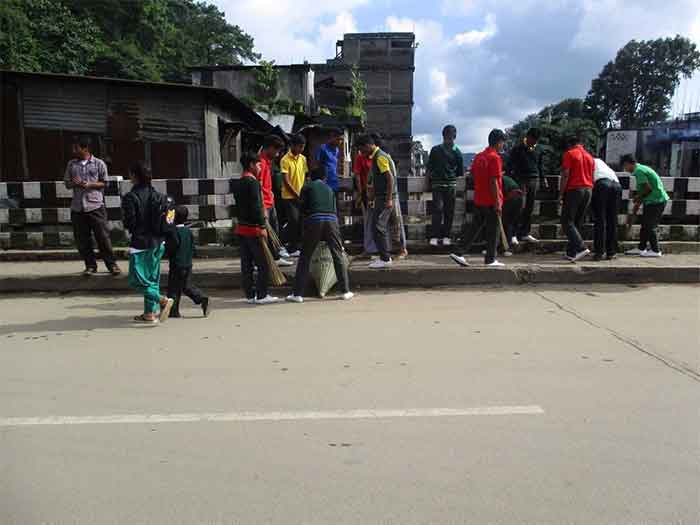 School children line up to clean a bridge

Thousands of students sweep the entire area every week and this practice has become a ritual. In the coming weeks, we also plan to include government officers, NGOs and general public in this ritual. Today, Nongstoin is very close to becoming the cleanest town in northeast India. If the students can do it, so can we, said Mr Kembhavi.

Nongstoin’s weekly practice shows that the Prime Minister Modi’s faith in Swachh Bharat Abhiyan becoming a people’s movement is slowly being realised. Roping in school children is not just a good way of spreading the message of cleanliness, but also ensures that they take the same message back to their homes and practice a clean lifestyle. Nongstoin plants to eradicate the practice of open defecation by 2019. Nongstoin has not just set an example for Meghalaya or the northeast, but for the whole country as such similar initiatives will only lead us towards a cleaner tomorrow.

Also Read: India, Take A Cue! Learn How To Do Waste Management Right From This Tamil Nadu Town

This 24-Year-Old Is Cleaning The Streets Of Shillong, And Is Requesting Others To Do The Same