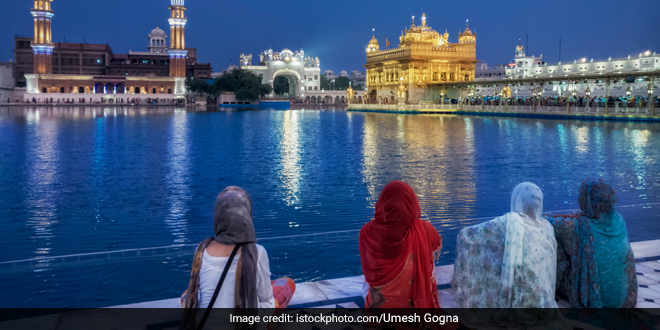 New Delhi: While the state of Punjab was doing better than many other states in terms of managing COVID-19 earlier in the month of May, the health authorities say that there has been a surge in the number of cases in all 22 districts since July. The data provided by state health department shows that Punjab’s doubling rate of cases which represents the number of days taken to double COVID-19 cases was 102 days on May 25 which dropped drastically by the mid of June to 34 and then became less than 20 in August due to the increase in caseload. As on September 21, the doubling rate of COVID-19 cases in Punjab is 32. According to Dr Rajesh Bhaskar, state nodal officer for COVID-19 and a senior official in the Department of Health and Family Welfare, Government of Punjab, the lack of awareness and adherence to preventive measures like wearing masks and following social distancing among the people as the state opens gradually from the lockdown has led to the spike in the number of cases. Here is how the state is fighting the challenges of COVID-19 pandemic.

The first case of COVID-19 was recorded in Punjab on March 9 when a man returning from Italy tested positive. After that, the state recorded another case on March 19 of A 72-year-old woman who had returned from Germany via Italy. By March 31, there were 37 confirmed cases and 4 deaths due to coronavirus in the state. There continued to be a slow but steady increase in the number of cases per day through April, May and June. The state saw a double-digit increase in the number of cases on most of the days till June 15 after which the additions were over 100 cases per day. Over the first four months of the pandemic, the state added about 5,400 cases. The surge continued over the month of July and since August 7, the state is adding over 1,000 new cases per day. According to Dr. Bhaskar, almost all initial cases could be traced back to international travellers and those who were repatriated. For the surge in the last two months, he said,

Even after constant efforts and conducting programs for awareness, many people have started taking the pandemic lightly. The state is slowly easing up the restrictions and the movement of people has increased. A lot of people, especially the young, are ignoring preventive measures. This is one of the biggest reasons for the surge. Another reason is the increased testing in the state. We are not testing over 24,000 people per day and will be able to test over 30,000 per day by next week. Also, a large number of people who are asymptomatic and are roaming around without knowing if they have an infection or not, are also spreaders. We are conducting antigen tests in hotspots and containment zones to track COVID-19 in a better way.

As of September 21, the State’s Health Department has confirmed a total of 97,689 cases, including 22,278 active cases, 2,813 deaths and 72,598 recoveries in Punjab. The recovery rate of the state is 74.3 per cent which is less than the national average of almost 80.1 per cent. Similarly, the state has a poorer fatality rate of 2.87 per cent in comparison to the national average of 1.6 per cent.

The district-wise data shows that with 16,239 confirmed cases, Ludhiana is the worst affected district of the state followed by Jalandhar with 11,367 cases, Patiala with 10,364 cases, Sahibzada Ajit Singh Nagar with 8,654cases and Amritsar with 8,170 cases.

According to an official of the Department of Health and Family Welfare, in Punjab, it is the younger generation that is contributing the maximum caseload while the maximum death is taking place among the patients who are above 50 years of age. He further said that the higher fatality rate among the elderly is mostly due to comorbidities which refer to the presence of one or more additional physiological or psychological conditions like hypertension, diabetes, liver-issues among others.

Status Of COVID-19 Testing In Punjab

According to the Department of Health and Family Welfare, the state has conducted over 15,79,113 tests as of September 20. About 26,000 tests are being conducted daily at present but according to the state authorities, arrangements have been made to increase the daily testing to over 30,000 per day by next week.

There are currently, 603 government laboratories including Rapid Antigen Testing Centres in the state. Rapid antigen tests detect the presence of viral proteins (antigens) expressed by the COVID-19 virus in a sample from the respiratory tract of a person. Apart from this, 45 private laboratories are approved by the Indian Council of Medical Research (ICMR) for testing for COVID-19 in the state. 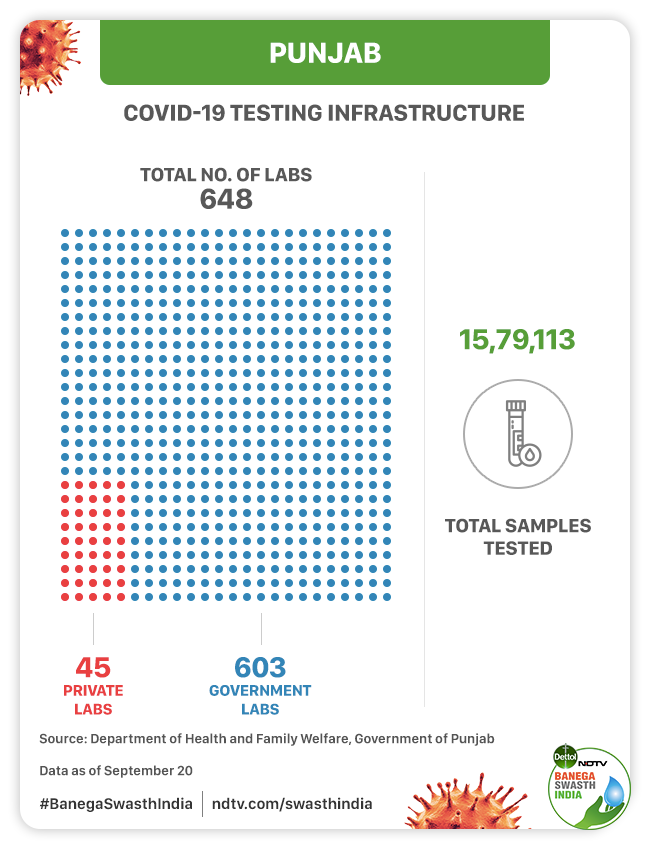 There are 648 labs in Punjab testing for COVID-19

The attempt should be to ensure higher and early testing in those districts, where there are more cases. Two data points are important – test positivity, and fatality, try to keep both as low as possible. Early detection of COVID-19 needs to be done in Sangrur, Patiala and Pathankot as the fatality has been higher in these districts.

As of August 30, there are 66 hospitals dedicated to COVID-19 including 63 government hospitals and three private hospitals. The state has also set up 56 COVID Care Centre at various places to face the increasing number of cases.

While speaking with NDTV, Dr. Bhaskar said that the state is well equipped with beds, medical supplies and machinery to manage COVID-19. The data provided by the Health Department of Punjab says that the state has 13,000 beds dedicated to people who are asymptomatic, almost 6,000 beds for those who have mild or moderate symptoms and 800 beds are dedicated for treating the patients who are severely ill. The state has 7,000 beds with oxygen support and 400 ventilators. 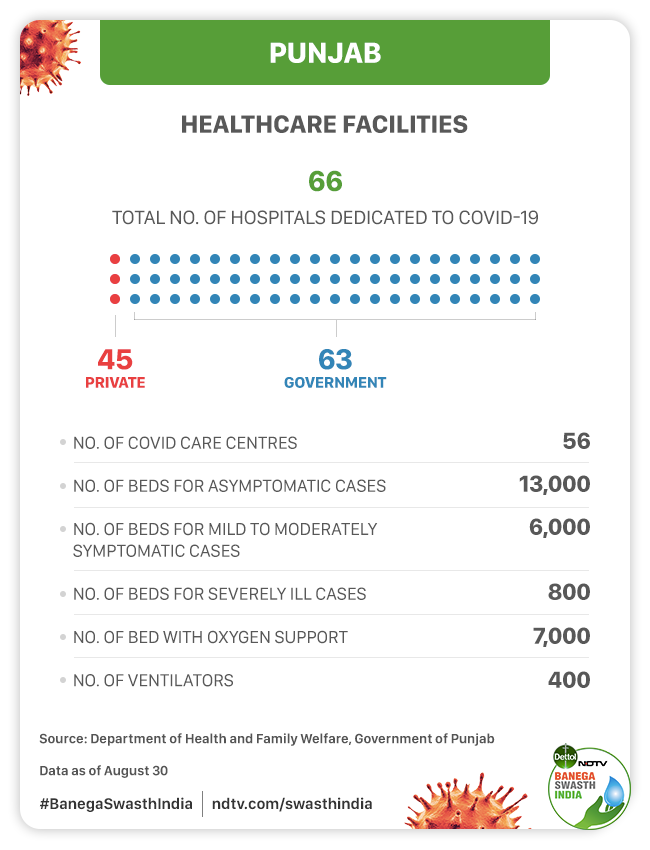 Health facilities in Punjab for combating the pandemic

According to Dr. Bhaskar, the state government is in the process of increasing the number of beds for treating patients with severe infection across the state as the cases surge. He said,

Now almost every district has an advance life support ambulance equipped with the latest equipment to transport patients during an emergency.

The state started using plasma therapy for treating the critically ill patient since July the first plasma bank was established at Rajindra Hospital, Patiala. Plasma banks are now operational in Faridkot, Patiala and Amritsar also. On August 1, the Health Department announced plasma therapy as a free service at government and private facilities.

Early Responses Of Punjab Government To The Pandemic

According to the Department of Health and Family Welfare, Punjab was the first state in the country to impose a curfew, even before the nation-wide lockdown. Since then, the state government has taken several measures to manage the pandemic. It has set up a State COVID-19 Management Group to review the situation and their report to the Chief Minister.

With an aim to raise awareness among people and tackle the stigma around COVID-19, the state started COVID-19 Anti-Stigma and Anti-Discrimination Campaign on August 11. The state government also formed a State Public Health Advisory Group for raising awareness among the citizens about the COVID-19 pandemic.

The state government started Mission Fateh on June 2 as part of the state’s battle against COVID-19. The mission, according to CM Amarinder Singh, represents the determination of the individuals of Punjab to end the spread of the Novel Coronavirus through control, collaboration and sympathy. Through this mission, the state government has been creating mass awareness about wearing masks, washing hands, maintaining social distancing, taking care of the elderly, and many other aspects of COVID-19 including home quarantine and emphasizing that the threat of the virus has not diminished, rather it has become more menacing.

According to Dr. Bhaskar, the state’s containment strategy from the initial days of the pandemic has been active surveillance including house-to-house surveillance.

Measures Undertaken By The State To Provide Relief To The Poor

According to Dr. Bhaskar, Punjab authorities have given priority to the needs of the migrant workers in stranded in the state, those who returned to the state and the daily wagers who lost their livelihood during the lockdown. On 23rd March, the Punjab government sanctioned Rs. 20 crore for free food, medicines to poor from the Chief Minister’s Relief Fund.

The state established more than 700 shelter camps across 22 districts for the homeless and migrant workers. According to the state government, till now, over 21.98 lakh food packets have been distributed among the poor while NGOs have distributed over 1.84 crore food packets. The state government is working with various non-government organisations and village committees for reaching out to needy families. The state has distributed over 4,000 ration kits to those in need, in addition to the regular ration distribution.

According to Chief Minister Captain Amarinder Singh, the state government has been undertaking all kinds of measures to fight COVID-19 in the state. He said that the five pillars of tackling the pandemic in the state are: political and administrative commitment, preparedness, surveillance by deploying the Trace-Test-Treat principle, capacity building and establishing coordination among various sectors. However, as the lockdown is easing and the movement of the public is increasing, the number of cases are on a rise, mostly because the people are not following preventive measures. The state officials say that they are certain that the situation can be reversed if the people start taking the pandemic more seriously. For this, along with several awareness campaigns, the state government is also imposing fines on violators to remind people to wear masks when out in public and follow social distancing. However, experts suggest that in order to manage COVID-19 in a better way, the state government needs to work towards improving health systems on a war footing in all the districts while focusing on preventing fatalities.

In Punjab, International Travellers To Be Tested For COVID-19 By Rapid Antigen Test On Arrival For Home Isolation