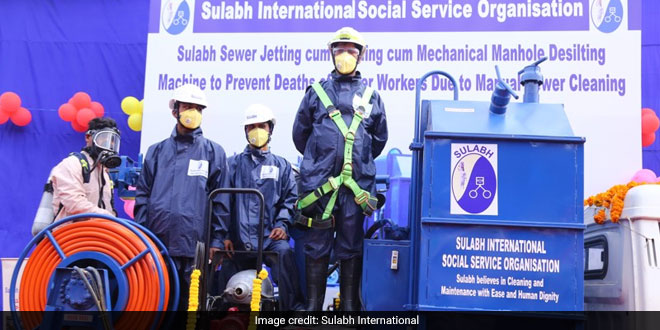 New Delhi: Disgusting, dangerous and demeaning that is the life of thousands of sewer cleaners (manual scavengers also called Safai Karamcharis), whose jobs define not just their current existence but also that of the generations down the line. Engaged in handling human waste manually, clearing choked drains with minimum equipment and gathering human waste from railway platforms. The practice of manually cleaning the drains has been prohibited in India through the Employment of Manual Scavengers and Construction of Dry Latrines (Prohibition) Act of 1993. According to various sources, during the last three years there have been over 1,300 deaths of Safai Karamcharis while entering sewer lines without any protective equipment and safety gears. Even if these are conservative estimates, these deaths in today’s day and age is unacceptable at multiple levels.

To mark the occasion of World Toilet Day, Sulabh International introduced India’s first all-in-one sewer cleaning machine – ‘Hope’ machine that comes as a ray of hope for the sanitation workers to put an end to the hazardous practice of manual scavenging.

The machine will provide services to clean manholes, which will help reduce the cases of human casualties inside manholes.

We often hear the tragic news about the sewer workers losing their lives while working inside the sewer. This is a matter of grave concern for all of us. With the machine, a worker won’t have to enter the sewers, risking their life and dignity and violating the Manual Scavenging Act but even if the need arises for them to enter the sewer, then the machine is fully equipped with gas checking machine, protective gears and dress to protect the workers from harmful gases, Dr. Bindeshwar Pathak, founder of Sulabh International announced while unveiling the machine.

Dr. Pathak confirmed that the new machine is ideal for periodic mechanical desilting of manholes and to flush out sewer lines using the powerful jetting pump, capable of producing 150 bar operating pressure and a flow of 150 litres per minute. It is also capable of de-choking sewer line using especially designed flexible steel rods.

According to Mr Ajay Kumar, Senior Advisor, Sulabh International, the machine is vehicle mounted, electro-hydraulically operated, sewer jetting and rodding along with the feature of mechanical manhole desilting. The features of the machine also include personal protective devices and sewer quick view pipe inspection camera.

Outstanding iP68 protection ability enables it to keep working under 10 meters water. The camera sensor features 360 optical zooming functions, capable to capture pipe details from a distance up to 100m. The camera body tilts automatically up 20° and down 90°.

The ‘Hope’ machine costs Rs. 43 Lakh each and was unveiled by the mayors of all the three Municipal Corporations of Delhi (MCD) – Mr. Bipin Bihari Singh, Mr. Adesh Kumar Gupta and Mr. Narendra Chawla in the presence of Delhi BJP President Manoj Tiwari and Dr Pathak. 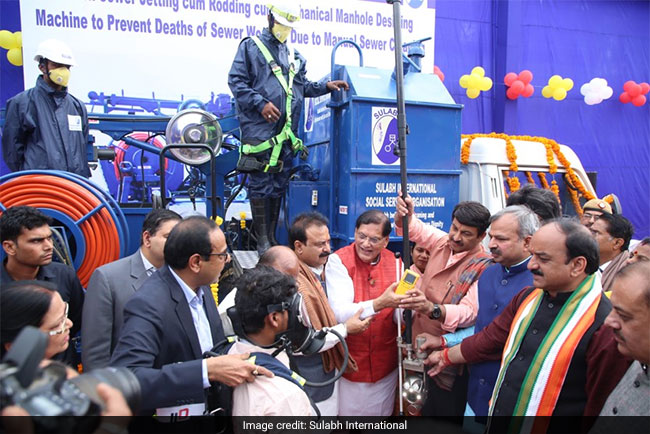 Manoj Tiwari, while addressing the media said, Now that the Sulabh founder has taken the initiative to bring the machine here, I request the Delhi government to buy more of such vehicles. I have also asked the three MCDs to purchase more of these vehicles and complete the process within the next two months.

Nearly a century after Mahatma Gandhi called for the abolition of manual scavenging, the degrading practice continues. Mechanised solutions to replace the requirement of manually cleaning the sewers may just be the way forward to put an end to this menial profession.

Recently on Gandhi Jayanti, NDTV-Dettol Banega Swachh India’s campaign ambassador, Amitabh Bachchan, on learning about the hardships faced by the sewer workers in India, committed to donate 50 machines during the Cleanathon Season 5 which he is adamant to fulfill. On Saturday, Mr. Bachchan donated two sewer cleaning machines and one truck machine Municipal Corporation of Greater Mumbai to clean the sewers and help fight the inhumane practice of manual scavenging.