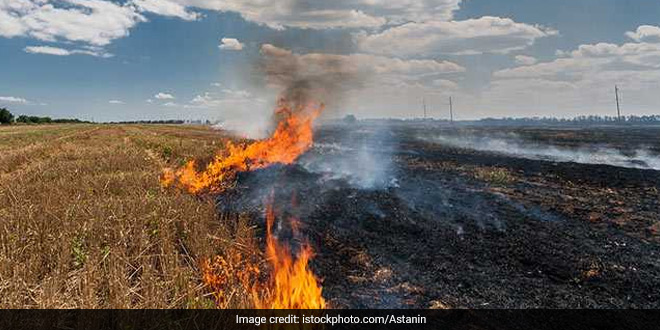 After harvesting rice, farmers have a short window of about 20 days to plant wheat, and late sowing means lower yields

Gagsina: India’s efforts to reduce crop-waste burning, a major source of air pollution during the winter, by spending billions of rupees over the past four years have done little to avert a sharp deterioration in air quality. Stubble burning in Punjab and Haryana states, part of the farm belt that borders the capital, New Delhi, accounts for 30 per cent to 40 per cent of air pollution in October and November, according to air-quality monitoring agency SAFAR.

In 2018, Prime Minister Narendra Modi’s administration set out to tackle the problem by establishing a fund to help farmers get rid of rice paddy straw, left out in the field by mechanised harvesters, by using machines.

It has taken 22.49 billion rupees ($302 million) and four years but the plan aimed at stopping farmers torching their crop waste has failed to have any measurable impact on air quality, with New Delhi’s again in the “very poor” category this month, as in previous years, SAFAR data showed.

In the Karnal district of Haryana, 117 kilometre (73 miles) north of New Delhi, dozens of farmers from 12 villages told Reuters that the authorities’ failure to iron out glitches in the plan and the prohibitive prices of the equipment had made it difficult for them to either buy or hire it.

“The subsidy plan looks good on paper but the officials have failed to address our practical problems,” said Kishan Lal, a grain grower.

Despite the subsidy, the machines are beyond our reach.

A government spokesman did not respond to a request for comment. Two government officials, who both declined to be identified, acknowledged that the plan has not put an end to stubble burning and said it would take time.

Under the plan, individual farmers can get a 50% subsidy and farm cooperatives an 80% subsidy to buy the machines for cutting, collecting and hauling away compressed paddy straw.

Other than the subsidy offered by the federal government, since 2018 Punjab state has spent 10.45 billion rupees on crop waste management.

Farmers said the three pieces of machinery needed cost 250,000 rupees to 350,000 rupees, and they also need to buy at least three tractors and two trolleys. A tractor and trolley – not covered under the subsidy programme – cost about 550,000 and 300,000 rupees, respectively.

Also, farmers need to first pay upfront and then claim the subsidy, which take up to 10 months, said farmer Jagdish Singh.

To be eligible for the subsidy, farmers need to buy the machines only from select government-approved shops, which often sell the equipment at a premium, farmers said.

Last month, growers from three villages – Raipur Jattan, Shahjahanpur and Gagsina – pooled their money to buy one set of the machines but soon found it was insufficient to handle a combined 9,000 acres of farmland spread across the villages.

Forget about three villages, this machine is not sufficient even for one. We burn the residue as we race against time to plant wheat.

After harvesting rice, farmers have a short window of about 20 days to plant wheat, and late sowing means lower yields.

A sharp rise in rice production and yields in India, the world’s biggest exporter of the grain, has exacerbated the problem of crop waste, with Punjab and Haryana generating more than 27 million tonnes of rice straw a year.

The plan has failed to address the problem because most farmers can’t buy such expensive machines, said Sunil Dahiya, an analyst at the Centre for Research on Energy and Clean Air.

The two government officials argued that the transition to mechanised crop-waste management would be a slow process. Encouraging power, paper and sugar producers to use the rice straw as fuel could also be a viable solution, they said.

Instead of turning Punjab and Haryana into a junkyard of these machines, the government should pay farmers 200 rupees for every 100 kg of rice straw which can be used as a feed stock for many industries, said agriculture economist Devinder Sharma.