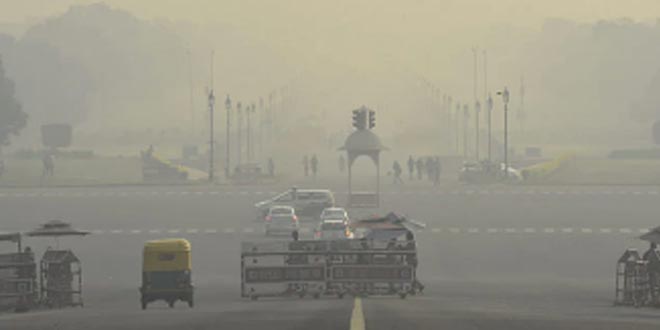 New Delhi: The Delhi air quality index reading plummeted to “severe” category this morning, following the festival of Diwali as people violated the ban on firecrackers and the national capital woke up under a blanket of toxic smog. Continuing its upward trend, the city’s air quality index, which stood at 382 at 4 pm yesterday, entered the severe zone around 8 pm as low temperature and wind speed allowed the accumulation of pollutants. The concentrations of Particulate Matter (PM) 2.5 stood at 999 per cubic metre at Jawaharlal Nehru stadium in the city on Friday morning – against the WHO’s prescribed safe limit of 25. Airborne PM2.5 can cause cardiovascular and respiratory diseases such as lung cancer.

Overall air quality is in ‘severe’ category today after bursting of firecrackers on Diwali and presence of bio-mass pollutants in Delhi. The air quality and fog condition to improve once windspeed picks up. No wind and high moisture is causing fog conditions, said RK Jenamani, India Meteorological Department (IMD), Delhi.

New Delhi has the worst air quality of all world capitals, but even by its sorry standards Friday’s reading was extra bad, as people paid the price for celebrating India’s biggest festival in the noisiest, and most smoky way. The neighbouring cities of Faridabad (424), Ghaziabad (442), Gurgaon (423) and Noida (431) also recorded ‘severe’ air quality with cracker bursting peaking after 9 pm. Despite Delhi government’s complete ban on firecrackers, including the green ones, several people were seen bursting crackers, contributing to the degradation of the air quality.

The firecracker ban didn’t seem to be successful in Delhi, which led to hazardous pollution levels adding on top of existing perennial sources,Sunil Dahiya, Analyst, Centre for Research on Energy and Clean Air (CREA) was quoted saying in a Reuters report.

Residents of Lajpat Nagar in South Delhi, Burari in North Delhi, Paschim Vihar in West Delhi and Shahdara in East Delhi reported incidents of firecracker bursting as early as 7 pm. A substantial dip in cracker bursting in the evening seemed a break from tradition. People from several parts of the city and its suburbs complained of itchy throat and watery eyes, as a layer of smog, the first episode this season, lingered over the region. The Haryana government has also imposed a ban on the sale or use of all kinds of firecrackers in 14 of its districts in the National Capital Region, while curbs were put in other parts. As per the Centre-run System of Air Quality and Weather Forecasting And Research (SAFAR), the air quality is not likely to improve until Sunday evening (November 7). The improvement would, however, just fluctuate in the ”Very Poor” category.

Experts said the air quality deterioration was due to unfavourable meteorological conditions — calm winds, low temperature and low mixing height — and a poisonous cocktail of emissions from firecrackers, stubble burning and local sources. Earlier on Thursday, the city reported its first episode of fog which lowered visibility at the Indira Gandhi International Airport and the Safdarjung Airport to the range of 600-800 metres in the morning. The capital’s 24-hour average air quality index (AQI) stood at 382 on Thursday, up from 314 on Wednesday. It was 303 on Tuesday and 281 on Monday.

An AQI between zero and 50 is considered ‘good’, 51 and 100 ‘satisfactory’, 101 and 200 ‘moderate’, 201 and 300 ‘poor’, 301 and 400 ‘very poor’, and 401 and 500 ‘severe’. According to SAFAR model forecasts, stubble burning share may increase to 35 per cent on Friday and 40 per cent on Saturday with the wind direction changing to northwesterly. Northwesterly winds carry smoke from farm fires in Punjab and Haryana towards the national capital. Relief is expected only from the evening of November 7 but AQI will fluctuate within the ‘very poor’ range, the air quality forecast agency said.