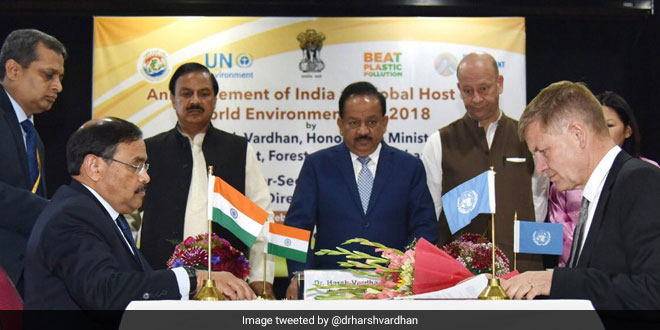 India is one of the world’s biggest plastic waste generators, accounting for producing nearly 56 lakh tonnes of plastic annually. Nearly 6,000 tonnes of plastic waste remains uncollected across the country daily, adding to the environmental woes. Governments have time and again reiterated their commitment to reduce plastic pollution. In the past few years, the Union government has engaged in several plastic cleanup activities, removing plastic waste from beaches and drawing plans to open more plastic to energy plants to tackle India’s plastic problem. Recognising India’s initiatives in reducing plastic pollution, the UN Environment Programme decided that India would be a country fit to host an event of such a scale.

Speaking at the event, Union Minister for Environment Dr Harsh Vardhan said that India will be excited to host the World Environment Day celebrations as it has been Indian tradition to co-exist with nature. The Union Minister said that India was committed towards making the world a greener place, and that was only possible when individuals took upon responsibility to commit themselves to at least one good green deed daily.