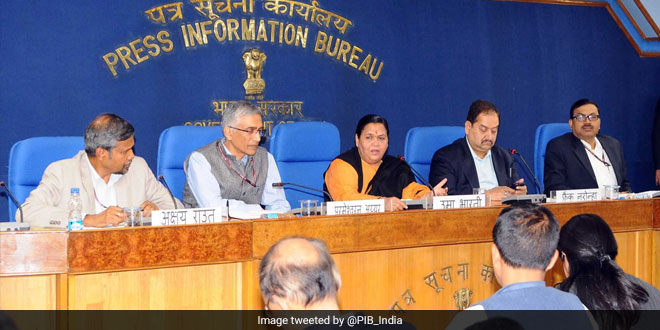 New Delhi: Menstrual hygiene management, eradicating open defecation from villages along the banks of river Yamuna and transition of villages to open defecation free plus from open defecation free (ODF) status were some of the points highlighted by Union Minister for Drinking Water and Sanitation Uma Bharti during a discussion on budgetary provisions for water and sanitation in 2018-19 recently. The Ministry was expecting an additional allocation of Rs 15,000 crore from the Extra Budgetary Provision (EBP), along with the Rs 15,343 crore the Swachh Bharat Abhiyan has been allocated under budget 2018-19, Parmeswaran Iyer, Secretary, Drinking Water and Sanitation.

I have spoken to my fellow colleagues Maneka Gandhi and Smriti Irani and we will very soon develop a comprehensive package on providing cheap sanitary napkins to women and girls in school. We are working on a proper plan on how cheap sanitary napkins will be made available and how will they be disposed, said Uma Bharti, Union Minister for Drinking Water and Sanitation.

Menstrual hygiene remains a critical area of concern for India. A mere 12 per cent of India’s menstruating women have access to sanitary pads. Many young girls are forced to drop out of schools early due to unavailability of sanitary napkins. Ms Bharti said that gram panchayats will be asked to compulsorily spend a certain amount allocated to them, towards improvement of menstrual hygiene in areas under their jurisdiction.

Stressing on the importance of transition from ODF to ODF plus, Ms Bharti said that the government will focus on ODF plus aspects like solid liquid waste management and behavioural change to ensure that villages which have already attained ODF status move up to the ODF plus category. ODF plus villages can also generate employment opportunities under the Swachh Bharat Abhiyan, said Ms Bharti.

Given the ODF status of all 4.465 villages along the river Ganga, the government will now work on the ODF status of villages along the Yamuna river, said Ms Bharti. The Yamuna Gram scheme will follow the model of the ODF villages on the Ganga basin. The Minister said that the construction of toilets along Yamuna villages will be prioritised to encourage safe sanitation, as well as reduce pollution in the river.

I know the problem of pollution of the Yamuna river. We have made all villages on the banks of Ganga open defecation free. I want to take the same project for the Yamuna too. It will be done through active participation of the gram panchayats and the people living in those villages. It will also control the pollution of the river, said Ms Bharti.

As the Swachh Bharat Abhiyan enters its penultimate year, the focus for the government will be to reach as close as possible to the target so that bulk of the work is done by the end of 2018 itself. A confident Ms Bharti said at the press conference that the goal of an ODF India by October 2019 was achievable. Currently, out of the target of 11 crore toilets, 5 crore remain to be built by the end of 2019.