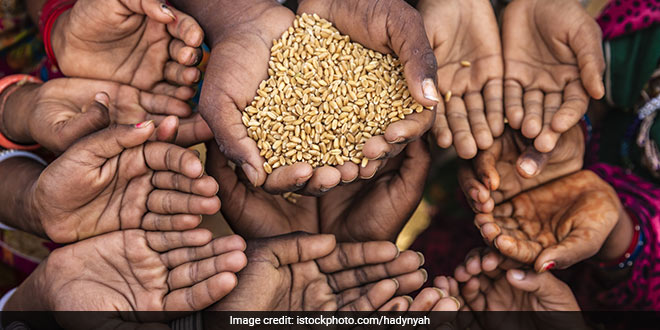 New Delhi: For Bhaskar Kumar it is a struggle to name green leafy vegetables found in India for his homework as his staple diet is rice and salt with vegetables served only on festive occasions.

But the eight-year-old from Pilakhana village in India’s northern state of Uttar Pradesh decides not to ask his mother Shakuni Bai, aware she skipped dinner four times that week.

For Bai is among 194 million Indians going hungry daily, according to the United Nations’ Food and Agriculture Organisation (FAO) – despite India wasting food worth about $14 billion a year, according to government figures.

India, one of the world’s largest food producers, is trying to tackle waste during production, processing, retailing and consumption by funding internal initiatives and by partnerships on best practice and technology with overseas investors.

But many of those struggling to get enough to eat are concerned that progress is too slow in India which ranked 100 among 119 countries in the 2017 Global Hunger Index, with 14.5 percent of the population undernourished.

Bai said her problems getting food came when three years of inadequate rainfall were followed by Prime Minister Narendra Modi’s “demonetisation”, when two of the highest denomination notes were scrapped in November 2016.

I had my own land where I used to grow rice and wheat alternately but with three years of consecutive drought I mortgaged my land to pay the mounting debt, Bai, 42, said during an interview at her mud-and-brick hut in Pilakhana.

I decided to give myself a last chance and was planning to pay the mortgage by farming as the forecast suggested good rain in the coming months but then demonetisation happened. The little money I had saved to buy seeds became worthless, adding by the time she changed her notes the price of seed had soared.

Bai now works as a daily labourer, earning 120 Indian rupees ($1.87) a day, which is not enough to support her family of eight that includes five children.

The paradox of millions going hungry in India while food goes to waste is receiving increasing amounts of attention as the FAO stresses that one third of food produced globally for human consumption is wasted every year.

As the World Economic Forum has highlighted, food production is clearly not the main issue as India needs 225-230 million tonnes of food per year to feed its population – and farm output in 2015-2016 hit more than 270 million tonnes.

Sharad Pawar, a former agriculture minister, once told parliament that nearly 40 percent of the value of annual production was wasted, with crops left to rot in the sun without storage or transportation, or eaten by insects and rats.

This wastage has a knock-on effect on the environment as well, as the efforts made to produce this generates greenhouse gases, uses water, and can lead to deforestation.

But while India’s Amul, the world’s largest dairy cooperative, has been widely praised for successfully processing huge amounts of milk quickly and safely for years, spurring the so-called “White Revolution” in India, authorities have struggled to stop vast amounts of grain wasting every year.

The Food Corporation of India (FCI), the nation’s main grain procurement agency set up about 50 years ago, now sits on mounds of rice and wheat and has faced criticism for being too weighed down by process and bureaucracy to solve the problems.

A report by the government’s Comptroller and Auditor General (CAG) published last year involved a detailed analysis on shortcomings of the FCI including wastage, misappropriation, and fraudulent payments.

An official with the FCI, who wished to remain anonymous, said a key reason for food waste is damage caused by a lack of infrastructure which it is trying to overcome by investing in building new cold storage facilities over the next five years.

But while this food is wasted, millions of people are going hungry, with 38.4 percent of children aged under five stunted, according to the Global Hunger Index.

The under-5 mortality rate is 4.8 percent in India, partially because of inadequate nutrition and unhealthy environment.

Critics are concerned that it is not enough to just focus on boosting grain storage, as 350 million of India’s 1.3 billion people live in rural locations where electricity is unreliable and erratic so the use of cold storage facilities limited.

They want to see improved transportation to move food supplies faster, and faster food processing so less is wasted.

We store fruits and vegetables with neem leaves (a medicinal herb) which act as a pest resistant agent. We also use dry chillies to kill any insects infecting the grains, said Mr Rajan, talking in a field near his house.

He said he preferred to do this as the 1,900 or so storage facilities built by the government around the country are mostly city-based and using them incurred transport costs.

Moreover, there is no surety that our crops won’t rot in these facilities, he added.

The Indian government, however, has said it is trying to stop food losses and address hunger in various ways, including changing distribution strategies and using technology.

The Ministry of Food Processing Industries is working with the private sector companies to provide pre-cooling and chilled storage from the farm to the consumer, with about 228 projects underway by August last year.

Secretary in the Ministry of Agriculture and Farmers’ Welfare, Shobhana Pattanayak, said the government distributes excess grain through a public distribution system.

Under this system the government buys food grain from farmers and distributes it at subsidised prices to the poor, selling wheat and rice at two and three rupees a kg compared to the market price of 12 and 13 rupees.

But the system has come under fire from some locals who say supplies and the quality can be erratic with grain from the distribution system being siphoned off by middlemen who sell it at a higher prices than the market rate.

The superior quality food grains are sold in the black market by the middlemen and the bad quality wheat and rice is given to us at a subsidised rate, said Ali Sher, head of Pilakhana village in Aligarh district of Uttar Pradesh state.

A small quantity of good quality rice is mixed with rotten portion to increase the volume and sold to us at subsidy. It is better to starve than to eat rodent-infested food.

Sagheer Ahmed, professor at the Faculty of Agricultural Sciences, Aligarh Muslim University, said a lack of storage was the main reason for wasted food grain along with no concrete system for processing perishable fruits and vegetables.

There is also a huge communication gap between farmers and scientists and … they fail to benefit from the technologies developed by us.

Related Topics:
Food Waste
Up Next