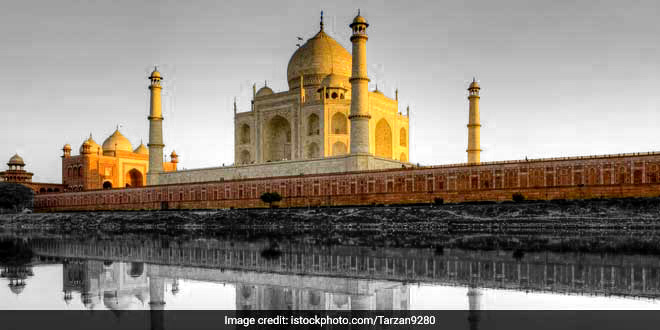 New Delhi: “It is said that water is life and sanitation is dignity! This dignity is absent in Tajgang area,” read a report compiled by India’s National Environment Engineering Research Institute (NEERI). A study (Taj Mahal Tourist Impact Assessment and Carrying Capacity) conducted by the NEERI in March 2016 revealed that dumping and burning of garbage in open is diminishing the value of the monument. Few months later, the government nominated Taj Mahal under its Swachh Iconic Places (SIPs) initiative to raise the cleanliness levels and bring them at par with international standards.

Issues like poor handling of solid waste, garbage lying inside and around the vicinity of the ivory-white marble mausoleum and the problem of open defecation were addressed on priority basis by the Archeological Survey of India (ASI) and the Agra Municipal Corporation (AMC). While ASI is responsible for maintaining cleanliness inside the monument, the AMC takes care of sanitation and cleanliness outside the premises. Here’s how Taj fares under five Swachh parameters of the SIP initiative –

Under the SIP initiative, 7 wards surrounding the monument were to be revamped by the AMC as most of the tourists to the city, reside in these wards. Apart from the existing 12 community and public toilets, 6 new community and public toilets were constructed by the civic body. Since 60% of the population in Agra consists of slum dwellers the problem of open defecation and urination was a major challenge in the city. The 7 wards were made open defecation free (ODF) in the last one year. Thanks to the SIP nomination, 200 families residing in Ghaseyari mandi close to the monument were equipped with individual toilets.

Inside the monument two new toilet blocks each consisting 3 toilets (for male, female and gender neutral) have been built. The toilets are maintained by the Shulabh International and 4-5 staffs are responsible for its sanitation and cleanliness.

In February this year, the National Green Tribunal (NGT) had slapped a fine of Rs 20,000 each on Uttar Pradesh government, Agra Nagar Nigam and the District Magistrate for failing to file their replies on the issue of open burning of solid wastes in the city. A plea was filed by NGO Social Action for Forest and Environment (SAFE) alleging that burning of municipal solid waste (MSW) is responsible for Taj Mahal turning yellow.

Following the NGT order, strict instructions by the AMC were given out to all the ward officials to refrain from burning the waste collected, “From FIRs to monetary penalties all kinds of punishments were imposed in last one year on workers who were found burning the garbage,” says Sanjeev Pradhan, Executive Engineer, Environment, AMC.

Citizens were involved in the exercise and were asked to monitor such kind of activities. WhatsApp numbers were given for citizens to post complaints and pictures. Mr Pradhan says though the problem has considerably come down in last one year, it hasn’t yet been completely eliminated. And this is evident as the particulate matter (PM) released due to burning of MSW has come down to PM 8 from PM 10 according to Mr Pradhan. Presently the 7 wards generate around 75 tonnes of waste on a daily basis and all of it is dumped at the Chalesar dumping site. The civic authorities are working towards implementing 100% waste segregation in these wards.

Littering and Provision of Bins

On an average 4 million people visit the man-made wonder every year and with influx of so many tourists the problem of littering has been a major problem for the authorities. The issue of littering inside the monument isn’t as high as it is outside the premises, “The problem of littering lies in the nearby areas as safai karamcharis carry out regular cleaning inside the monument,” says Dr Bhuwan Vikram, Superintendent, ASI, Agra Circle. More than 40 bins are placed inside the Mahal and 12 workers are deployed to collect the litter. When asked about the kind of wastes tourists discarded Mr Vikram says, “People often used to litter the monument with plastic wastes including bottles, wrappers, plates and shoe covers, however now with awareness the issue has almost been eradicated.”

Addressing the roadside littering problem outside the monument, the AMC increased the number workers to 52 from 30 who carry out sweeping activities twice a day. Now that the waste segregation guidelines have been issued across the country the AMC will soon install bins with internal compartments for dry and wet waste, “A contract of 40 such bins has already been given to a firm and at present there are 15 regular bins placed in the nearby areas,” says Mr Pradhan.

The NEERI in its report had suggested installing more of closed bins instead of open ones to avoid overflowing of the bins. The AMC has managed to address the overflowing issue with regular clearance of garbage from the public bins. In addition, it has given a contract of 20 concrete closed bins to the same firm.

Besides prohibiting open burning of wastes, the AMC has taken several effective steps to tackle air pollution.. Air pollution emitted from vehicles was one of the reasons for the monument turning yellow. To prevent pollution, vehicles were banned from within 500 metres of the monument in 2010. As an effective dust control measure, the roads leading to the monument are being redeveloped with gravel products which suppress the dust particles causing less air pollution. The roads are regularly sprinkled with water throughout the day to reduce the pollution.

Last year the green court had slammed the Uttar Pradesh government over rampant disposal of solid wastes in river Yamuna, which runs alongside the monument, “You are the government of Uttar Pradesh. You cannot protect the Taj Mahal from which you are making millions. You are dumping municipal solid waste in Yamuna just behind Taj Mahal,” the bench had said. Several local activists have been taking out rallies pressurising the government and civic authorities to take immediate steps.

If Yamuna dies, no one can save Taj Mahal. The river remains dry for nearly eight months causing the sand particles to travel around the monument eventually dirtying it, says Brij Khandelwal who is actively protesting against unfortunate plight of Yamuna.

As per a statement by NGT, people are dumping all kind of wastes including industrial, household and human, which have led to groundwater stagnation and heavy water pollution. This in turn has led to breeding of an insect called Chironomus Calligraphus in the water which is causing greenish-black pigments on the marbles of the structure.

Though the structure is nominated under the SIP, cleanliness will remain a concern as long as the issue of pollution in Yamuna is not resolved completely. “It is a wholesome issue that government needs to take care of, merely conducting cleanliness drives inside the monument won’t help and in reality the condition of Yamuna has worsened in last one year,” adds Mr Khandelwal

When NDTV raised the issue with the concerned authorities, they said that there has been no study conducted so far which can prove the aforementioned connection, “Yes, the water pollution has created a breeding ground for bugs, but whether this is directly resulting in yellowing of the Taj or no hasn’t been proved yet,” says Dr Vikram.

Also Read: Waste Management Solutions Via Agra: These Two Engineers Are Attempting To Bring A Paradigm Shift In The City

India@70 #SwachhIconicPlaces: The Divine Abode Of Tirupati, Working Towards Cleanliness To Reside Next To Godliness