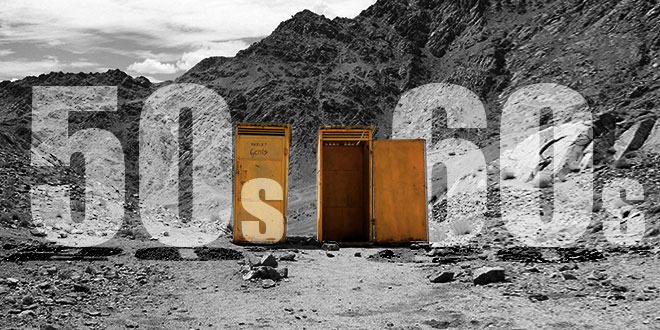 In 1951, the first step towards improving sanitation and health were taken by the Government of India. The First Five Year Plan, which was launched in 1951 and would go on till 1956. Health and sanitation was identified as a priority and a budget of Rs 140 crore was sanctioned to prioritise these two necessities. The National Water Supply and Rural Sanitation Programme were launched in 1954 as a part of the Plan and focused on improving water supply in rural areas to improve sanitary practices. Financial assistance was also committed by the Centre to the states, asking them to set up special investigation divisions to identify the problem of sanitation, especially in rural areas. A special grant of Rs 24 crore was provided to the states. 10,000 villages were identified where water supply and sanitation facilities would be improved. 250 urban sanitation projects across 16 states were also taken up during this phase. 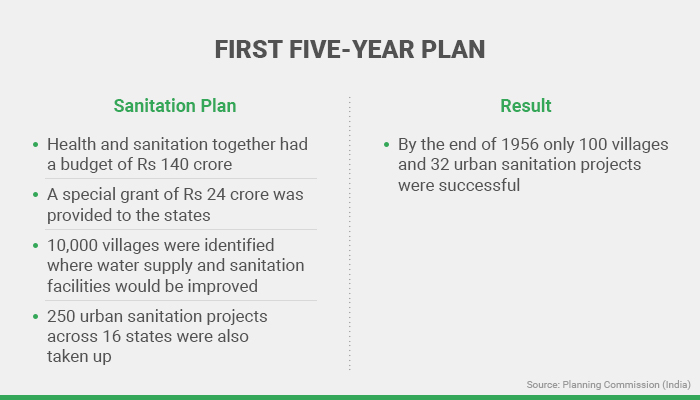 Despite the amibitious nature of the programme, several factors hindered its progress and by the end of 1956 only 100 villages and 32 urban sanitation projects were successful. The reason why the programme never took off fully was because of the lack of public health engineers in India back then. The reliance on state governments for implementation of schemes did not turn out to be very successful as back then there were few private engineering consulting firms which could cooperate with the government on construction of toilets in urban and rural spaces. The burden on the government engineering departments was huge, resulting in them not being able to complete even 50 per cent of the target.

The 2nd Five Year Plan allocated more money to the states and directed them to employ more sanitation workers and engineers to take the sanitation goals further. The 2nd Five Year Plan allocated Rs 53 Crores for urban water supply and sanitation, Rs 28 crore for rural water supply and sanitation and a special grant of Rs 10 crore for urban areas with municipal corporations. It must be noted that urban sanitation was given a bigger priority under the 2nd Five Year Plan. An additional Rs 50 lakh was also sanctioned for training of sanitary inspectors and health engineers. By the end of 1961, 1,200 villages had sanitation facilities, an improvement from the results of the 1st Five Year Plan, though still well short of target. The government faced the same problems of engineering departments being understaffed, as well as mounting pressure on local bodies to build and install toilets. 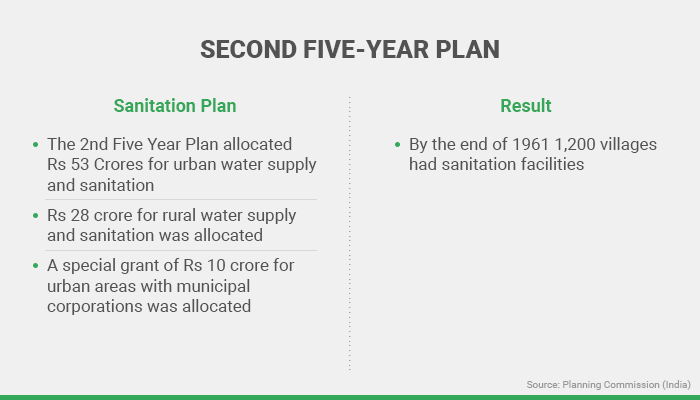 The Five Year Plans were noble in their approach towards the needs which arose immediately post-independence. The economy was still weak and the nation was still reeling with the effects of colonialism and partition. The plans identified the sanitation needs of the people but weren’t hugely successful in their execution, said Professor Kumar Jyoti Nath, President, Institution of Public Health Engineers, India

The 3rd Five Year Plan from 1961 to 1966 stressed more on the development of agriculture than water supply and sanitation. The outlay for rural sanitation was reduced to Rs 13 crore which was a setback for the minimal sanitation progress India was making. The low growth rate of 2.4 per cent, the Indo-China war and rising inflation pushed back the agenda of sanitation and water supply as spending was increased on industrialisation and defence.

The decades of 1950s and 1960s saw sporadic improvement in sanitation, but since there was no nationwide sanitation programme focused exclusively on sanitation, the results were dissatisfying. The scenario however, changed slightly in the next decade.

Related Topics:
Drinking Water and Sanitation sanitation Toilets
Up Next

India@70: 1974 Saw Adoption Of A Programme To Provide Sanitation For All In 30 Years

The Once Mighty Narmada In Madhya Pradesh Is Battling For Survival