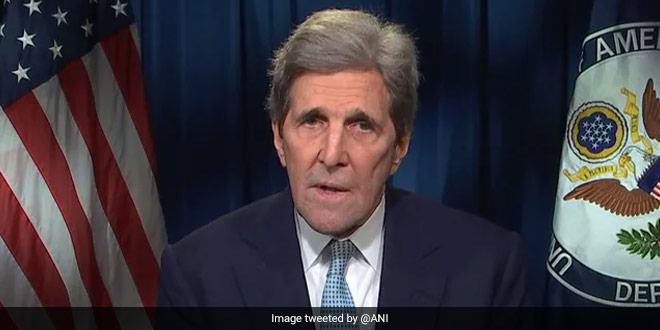 New Delhi: US Special Presidential Envoy for Climate John Kerry on Wednesday (October 20) said India’s goal of reaching 450 GW of renewable energy (RE) by 2030 is doable as it has already crossed the 100 GW RE mark. “It is really terrific to see India leading the ISA (International Solar Alliance). India is a close partner and the United States strongly supports India’s goal of reaching 450 GW of renewable energy by 2030. “We believe that it’s absolutely doable and will be done. India has already set an example for emerging economies by reaching 100GW of renewables,” Mr Kerry said while addressing a session of ISA general assembly.

He further said that what India has demonstrated with its low-cost solar auctions and build out of the transmission grids and massive solar parts program and other innovative policy tools can be replicated all over the world.
Noting that solar energy is at the heart of the urgent climate action, he urged nations to take dramatic action to keep the 1.5-degree Celsius temperature rise and mid-century net zero emissions targets within reach. He added that President Joe Biden recognizes the clean energy opportunity of solar in the US’ efforts to achieve the newly proposed NDC (nationally-determined contribution) of 50-52 per cent reduction in US economy wide greenhouse gas emissions by 2030. Mr Kerry said,

The US department of energy recently published a roadmap for how solar energy could economically generate 40 per cent of the country’s electricity supply by 2035. With 1000 GW of installed solar energy, solar would play the biggest role in a completely carbon free electric power sector by 2035.

Delivering the keynote address at the inaugural ceremony of the ISA general assembly where 106 countries are participating in the discussions, Mr Kerry applauded ISA and the leadership of India, France and member countries of the ISA assembly in their collaboration to advance the global clean energy transition. He added that ISA is critical to reducing greenhouse gas emissions and has an opportunity to accelerate solar’s growth with member countries blessed with the world’s strongest sunlight. Speaking on India-US ties and calling India, “a red-hot investment destination for solar power,” Secretary Kerry shared that, leading countries deploying solar power from India to the US are seeing the need for energy storage to balance the intermittency of renewable energy.

Harnessing the full value of solar energy will require countries to invest in storage, grid infrastructure and in flexibility in both demand and supply. And to connect solar power with parts of the economy that do not currently use electricity, countries must invest in electric vehicles and clean fuels like hydrogen that can be produced using solar power, he said. Responding to the US Special Presidential Envoy’s call to accelerate the momentum in solar, Ajay Mathur, Director General, ISA, said

Secretary Kerry’s emphasis on the need to do more is clear. Solar will catalyse the world’s transition to a lower-carbon economy, being the lowest cost and most economical solution for increasing power generation capacity in countries. ISA targets USD 1 trillion of investment in solar by 2030, which would be significant in bringing the world closer to energy transitions needed. Through initiatives such as the One Sun One World One Grid (OSOWOG), which are structured to foster interconnected solar energy infrastructure at global scale, grid interconnection will be key for transitioning to clean energy systems. We look forward to working more closely with the US in combating the climate crisis, he added.

ISA is an international organisation with 98 member countries. It works with governments to improve energy access and security around the world and promote solar power as a sustainable way to transition to a carbon neutral future. Its mission is to unlock USD 1 trillion of investments in solar by 2030 while reducing the cost of the technology and its financing.