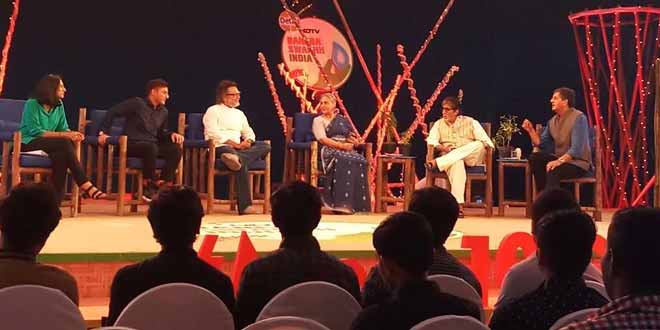 Actions, especially the not so well thought out ones often have irreparable consequences. India’s tryst with hygiene and cleanliness has also been similar, as decades of practising open defecation and disposing unsegregated and untreated waste has had severe impact on the nation’s environment. The danger looming over India’s rivers today is caused by years of disposing every possible types of waste in them. Today, all of India’s major rivers face the threat of pollution, and despite cleaning up efforts on behalf of successive governments, rivers of India continue to be in a state of grave danger.

Rivers are a major source of water in India, for agricultural, industrial and domestic purposes. The polluted nature of India’s major rivers like Ganga, Yamuna and others make water usage from them difficult, but the dependency continues nonetheless. Rivers and their state of pollution were major topics of discussion at the NDTV-Dettol Banega Swachh India Cleanathon, held on October 2.

More than Rs 22,000 crores has been spent on cleaning up of the Ganga alone since 1980s, not taking into account the amount allocated under the Namami Gange project launched in 2014. Despite the expenditure, the e coli content (which indicates the level of bacteria in river water) in many parts of Ganga is nearly 3,000 times more than the permissible limit of 500 most probably number (MPN) per 100 ml of water. The Yamuna is already on the verge of becoming a dead river as nearly 1,600 gallons of untreated sewage continues to flow into it daily.

More than Rs 20,000 crores has already been spent in cleaning up the Ganga, not taking into account the ongoing Namami Gange programme. The e coli level in the river is 3,000 times more than the permissible limit. This shows that despite the expenditure, nothing has changed in the river’s water quality, said Swati Thiyagarajan, Environmental Editor, NDTV.

While the amounts allotted to clean India’s rivers are high, the structure of expenditure remains a problem. If we take the example of the Ganga, the river flows through 5 states and coordination between the different the Central government, state governments, local bodies and municipalities has been a difficult challenge to execute, resulting in half-baked results despite expenditure. The picture is similar with all other major rivers, as conservation efforts have received mixed responses from different state governments, the brunt of which rivers had have to bear.

India’s river fauna has also been the victim of pollution. River species like the Gangetic dolphin, the gharials and turtles have been bearing the brunt of indiscriminate disposal of waste in the river, especially plastic.

When we speak about India, we don’t count wildlife as a part of it, an attitude that should change. A major victim of marine and aquatic litter is wildlife and marine fauna has had to suffer the most because of pollution, said wildlife cartoonist Rohit Chakravarty, who was also a part of the discussion panel at the cleanathon.

Sadhguru Jaggi Vasudev, founder of Isha Foundation, who has been in the limelight for his Rally for Rivers initiative shared his thoughts on the current scenario of Indian rivers at the Banega Swachh India cleanathon. Sadhguru Vasudev’s proposed solution for India’s ailing rivers is to have a kilometre long forest cover on the river banks. Farmers who have agricultural lands situated in river banks can opt for tree-based agriculture, thus eliminating any risks to their occupation.

96 per cent of India’s rivers are forest fed rivers. In the Ganga basin alone, 94 per cent of the tree cover has been removed. Substantial vegetation cover is required for adequate rainfall. The water needs to be held in the land by an extensive root system, so that it can flow into the river. Unless there are forests, we cannot regain our rivers, said Sadhguru Jaggi Vasudev.

Sadhguru Vasudev’s Rally for Rivers campaign has drawn support from several state governments. River water sharing has been the only issue which state governments have discussed in the past but the issue of river pollution has somehow eluded them. The Sadhguru also said that the shift to tree-based agriculture would be more viable for farmers, as it is an economic model which has seen successful implementation earlier.

Prominent cities near the Ganga basin have a number of schools of colleges. Children from every school can take part in cleaning up the river stretches. Youngsters are keen about these kind of things and can get themselves involved in such activities, said Amitabh Bachchan.

The situation for India’s rivers definitely looks grim and a large scale rescue operation is immediately required to ensure that pollution in India’s rivers is put a stop to. The task however will take large scale participation from governments, municipalities and local population across all major rivers in the country. As it was pointed out during the discussion at the Cleanathon, expenditure is not what is lacking when it comes to treating India’s rivers. The requirement is more about developing sustainable models of waste treatment and ensuring that disposal of all types of pollutants in rivers is immediately stopped.

Watch: Sadhguru On How To Revitalize The Rivers Of India