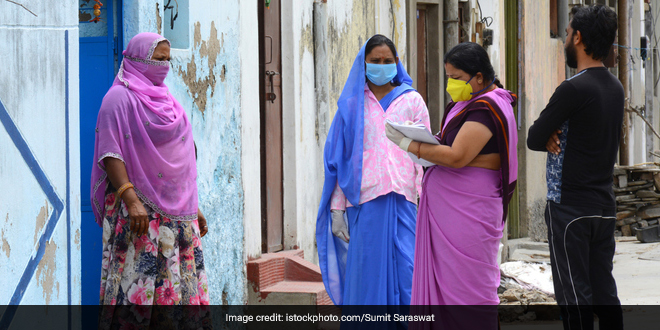 New Delhi: The nationwide serological data – the third of its kind – suggested that one out of every five Indians may have been exposed to the Coronavirus and there is still a large number of people who are susceptible to get the infection. The survey done by Indian Council of Medical Research (ICMR) noted that 21.4% of 28,589 people surveyed above 18 years of age showed exposure to the virus. Presenting the findings of the survey, ICMR Director General Dr Balram Bhargava said, “25.3 per cent of children aged 10 to 17 years from the same number of surveyed population have had the disease, urban slums (31.7 per cent) and urban non-slums (26.2 per cent) had a higher SARS-CoV-2 prevalence than that in rural areas (19.1 per cent). And 23.4 per cent of individuals above 60 years of age had suffered from COVID-19.”

The national sero survey was done between 17 December and 8 January, two weeks before India kicked off its vaccination drive. To know more about the findings and what it means for India and its fight against coronavirus, NDTV speaks with AIIMS Director Dr Randeep Guleria. Here’s what he has to say:

NDTV: Has significant people in India already got infected with coronavirus?

Dr Randeep Guleria: India’s Sero-Surveillance Data suggest that our large number of people have already been infected in the crowded cities, where the virus was spreading a lot and have gained some kind of immunity. This basically means that there has been a break in the chain of the transmission and the virus is not spreading from one person to another at a very fast rate, at least in some bigger areas or cities, which were badly infected earlier. Crowded areas of Delhi, Mumbai and urban slums fall in this category. In rural areas there is still a lot of susceptible population, but they are scattered and therefore the chances of the virus spreading rapidly is less.

Secondly, I think the reason why India cases have gone down so much is because we have some kind of inherent response to the virus and this host response needs to be further investigated. This is the phenomena, we have seen, not only in India but also in other South East Asia, so, it is either because of our immune response or previous exposure to other coronaviruses, we do have some degree of inherited immunity that is protecting us, which we have not seen in the western part of the world.

Also Read: Coronavirus Explainer: What Is A Sero Survey And Why Is It Important In The Fight Against COVID-19?

NDTV: 1 in 5 people exposed to the virus in India, 56 per cent have antibodies in Delhi. Have our containment strategies failed?

Dr Randeep Guleria: Not exactly, what the sero-survey results show is that the maximum number of cases we had in India was mild and most of the people were asymptomatic. These people were never tested and got picked up but that doesn’t mean that we were not doing enough testing. If these cases were not mild, they would have come to the hospital and then got picked up eventually. This is also reflected by our mortality rate, in India, deaths due to coronavirus is not very high and as a matter of fact, the mortality continues to be very low. If we add this data with our mortality data, then our infection mortality rate that is all the number of people who got infected compared to the number who have died, is very-very less. We should remember, the focus is on moderate to severe illness, asymptomatic, we could never be able to prevent, but we were able to make sure that we don’t have a situation where hospitals are full and we were running out of beds, as we saw in other parts of the world, where people actually lost their lives because of lack of resources or availability of the resources.

However, the point to remember here is that although the sero-survey and data suggests that we are in a good position, this is not the time to sit back because what we have seen in the other part of the world that the situation can change rapidly. This virus is a smart virus, it will retain, it will defend, it will develop strategies and it will have an escape phenomena from our immune response and therefore we all have to be very aggressive in our fight against this virus, we all need to stay one step ahead and make sure a situation doesn’t arise where we see a spurt in number of the cases.

NDTV: Have most cases gone undetected despite increase in testing?

Dr Randeep Guleria: What India’s strategy was and is that to have a focussed degree of testing, considering the size of our population, it is never going to be possible to say that we will test 5 or 10 per cent of our entire population repeatedly. We need to understand that testing is basically a one point thing, we cannot really predict, what will happen one or two or four weeks later from the point you test. Therefore, repetitive testing won’t be a practical option for any country, you will have to learn about the testing strategy that keeps your morbidity and infection rate down and that can only happen when we simply focus on increasing our testing, contract tracing and isolating those individuals who contracts the virus. There will always be individuals who are asymptomatic and there is no way you can test them all or stop them from spreading the virus to the fellow citizens. And that is what the biggest challenge we have from this virus. In this scenario, following COVID appropriate behaviour becomes the key strategy.

NDTV: Does India have a plan to fight the new variants of the coronavirus?

Dr Randeep Guleria: The plan is at multiple level – one is to have a very good surveillance pattern and that has to be done in two ways, one is to develop a network of labs that can do gene sequencing, we should be doing the same for at least 5 per cent of the samples we are getting and also gene sequencing from the areas where we have increased number of cases. For example in Kerala, we should be looking at a possibility that if there is some kind of variant out there which is why there is a spike in numbers, same for the increased number of cases in Maharashtra because we are not seeing this pattern in other parts of the country. We should link the above with something called epidemiological surveillance, we should have a surveillance pattern so that we are able to pick up any red flag or signal that is upcoming in any part of our country and then come up with a containment strategy. This is what is being currently done in India.

We need to focus on testing because unless we are testing we will not be able to pick up the new variant. The reason why UK picked up the new variant was because they were doing very aggressive testing. In India, testing for COVID-19 still continues to be robust because the number of cases have come down, the testing has come down to some extent, but we are still doing large number of tests just to make sure that we don’t miss out on any individual. However specialised testing for picking up the new variants still remain a challenge in our country because firstly you need specialised labs for the purpose and secondly gene sequencing is a costly affair.

NDTV: What is the role of vaccination? Is it critical for fighting the second wave of coronavirus in our country? Are vaccines effective against these new variants of coronavirus?

Dr Randeep Guleria: Vaccination is very important, we need to aggressively work on it for two or three reasons – one is that we don’t know how long the immunity lasts against the coronavirus. So the vaccines which we have will act like a booster shot for people who had some kind of immunity and will help build antibodies in those who didn’t have any immunity against the virus. The reason we have to vaccinate every individual is firstly to decrease our mortality because till date we don’t have zero mortality from coronavirus, people are still dying from the virus. Second is that we need to continue to break the chain of transmission at the same time we need to do aggressive research for the vaccines and the virus and make sure we stay one step ahead of the virus.

COVID-19 Explained: Will The COVID-19 Vaccine Be Effective Against The Latest Coronavirus Variant?

Conduct Of Functions Must Not Disturb Other Citizens’ Right To Clean Environment: National Green Tribunal