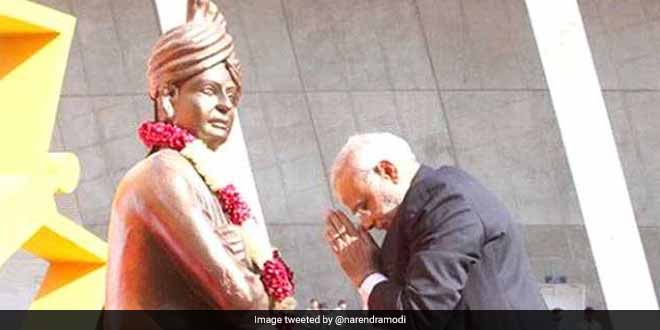 New Delhi: To commemorate Swami Vivekananda’s birth anniversary, India celebrates National Youth Day or Yuva Diwas every year on January 12. With a dedicated theme each year, this day is celebrated with great fervor to generate a positive attitude among people and make them aware about how they can help the society grow. ‘Sankalp Se Siddhi’ – achievement through resolve being this year’s theme, which was also the theme of ‘Swachhata Hi Seva’ (a fortnightly cleanliness drive organised in the run up to Gandhi Jayanti on October 2), Prime Minister Narendra Modi lauded the youth of the country for coming out in huge numbers to solve issues like open defecation and taking Swachh Bharat Abhiyan to new heights.

It is India's youth that is taking the Swachh Bharat Mission to new heights: PM @narendramodi https://t.co/mH5WSFU7Je

In a video conference conducted in Belagavi district of Karnataka, the Prime Minister addressed the future generation. He spoke about Swami Vivekananda’s principle of ‘Seva Bhava’ or offering a service and said every youth who is working towards making ‘New India’ a possibility is rightly following Swami Vivekananda’s path. And in this ‘New India’, cleanliness and sanitation plays a major role.

Seva Bhava is a part of our culture. All over India, there are several individuals and organisations selflessly serving society, he added. I appeal everyone to work towards making our nation ODF, he added.

On similar lines, Prime Minister Modi in his last Mann Ki Baat of 2017 had said that each and every individual must come forward and ensure that their areas are clean and help their city perform better in Swachh Survekshan 2018 which being carried out from January 4 to March 10.

“It is not for the government alone to maintain cleanliness. Every citizen and people’s organisations have a big responsibility on their shoulders. And, I appeal to every citizen to actively participate in the Cleanliness Survey to be undertaken in the coming days. You all should take the full onus to ensure that your city should not lag behind in the Swachh Survekshan 2018,” Prime Minister Modi had said.