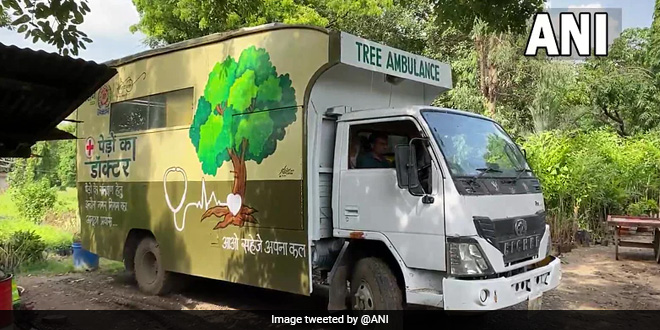 The tree ambulance has been prepared in the workshop of the Indore Municipal Corporation itself and will treat sick, worm-infested trees and plants

Indore: Madhya Pradesh’s Indore has now got ‘Tree ambulance’ which will provide all necessary facilities to preserve and protect the biodiversity in the city. Clean City Indore, which is consistently ranked number one in cleanliness, is now moving towards becoming a Green City as well. In order to protect biodiversity and to keep the city green, the Indore Municipal Corporation in collaboration with its Horticulture department has installed vehicles with all the necessary facilities for the protection of greenery in the capital city.

Also Read: What Indore, The Cleanest City Of India For 5 Years In A Row, Did Right And How Other Cities Can Go Zero Waste Too?

The ‘Tree ambulance’ is equipped with all the facilities for maintaining and keeping the trees around the city healthy. This ambulance has been prepared in the workshop of the Municipal Corporation itself and will treat sick, worm-infested trees and plants.

All facilities and equipment including spraying of trees, spraying of water as well as cutting and pruning are there in the ambulance.

Tree ambulance set up by Indore Municipal Corporation for the protection of biodiversity ‘Tree ambulance’ is all-in-one with necessities like sprinklers, water arrangements, medicines and other instruments, to maintain green Indore.

The ambulance will be operated by the Horticulture Department of the Municipal Corporation.

Related Topics:
Environment Indore
Up Next