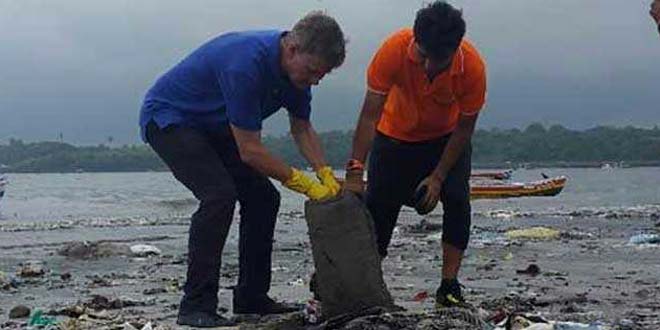 The global waste and garbage crisis is not limited to just land. Incessant disposal of waste has become a critical problem for our waters as well. With over 5 trillion pieces of plastic floating in our oceans, the threat has never been so intense. The United Nations’ observing the World Oceans Day on June 8, 2017 was a reminder of the stark problems of garbage disposal threatening our oceans today. India’s beaches are no different. Indiscriminate disposal of waste has become synonymous with most Indian beaches today. The Ministry of Environment and Forests (MoEF), has finally decided to act by joining forces with beach cleaning crusader Afroz Shah to widen his movement and cover more beaches under the Versova cleanup model.

Mr Shah has been instrumental in cleaning the Versova beach in Mumbai and uniting volunteers to come together for the cleanliness drive. His beach cleaning endeavours saw 1,500 volunteers uniting for a common cause and clean up to 3 million tonnes of trash in almost 2 years. Mr Shah’s cleanup drive received praise from all quarters, including Prime Minister Narendra Modi and United Nations Environment Project chief Erik Solheim. Mr Shah was also awarded the Champions of the Earth Award by the United Nations for leading the Versova beach cleanup. Seeing the success of Mr Shah’s cleanup drive, the MoEF has roped him in for his expertise. The project, which will be launched next month, will focus on 13 polluted beaches across India and follow the same model of community participation for cleaning these up, as followed by Mr Shah for Versova.

This programme will involve all stakeholders, including the Central and state governments, NGOs and volunteers so that their participation could be utilised. The implementation of the programme’s objectives will not be dependent on a single body or entity, said Mr Shah.

Mr Shah plans to travel with the team formed by the MoEF in identifying which beaches would be covered under the programme. In Mumbai, the beaches of Dadar and Mahim will potentially be a part of the 13 beaches. For the rest 11 beaches across India, the team comprising MoEF officials and Mr Shah will travel and look extensively at beach conditions. The beaches will be identified based not on reports compiled by concerned authorities but by physical visits undertaken by the team so that they get to understand the concerns and the problems first hand. Members appointed by the Ministry will visit the Versova beach in the first week of August, which incidentally will also enter its 95th week of cleanup. The members will study the Versova model and then with due consultation with Mr Shah, zero in on the final list of beaches.