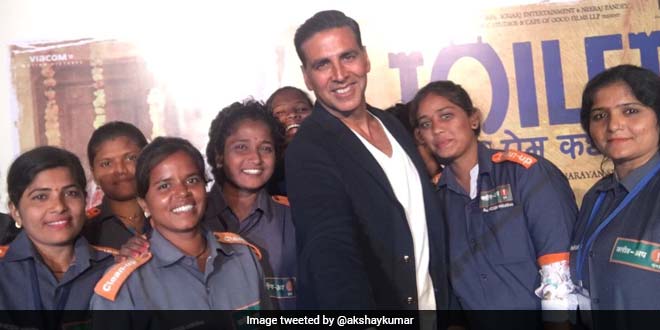 New Delhi: Fortunately or unfortunately, littering has made the Brihanmumbai Municipal Corporation (BMC) rich by Rs 8 crore. Since 2016, 753 cleanup marshals have been stationed across the island city to prevent people from littering and defecating in open. To honour their efforts in keeping Mumbai clean and tell citizens about their contribution to the Swachh Bharat Abhiyan, the Toilet – Ek Prem Katha star cast invited them at a press event today.

More than 15 lakh people were warned about littering, out of which nearly 5 lakh were fined pointed out the Toilet-Ek Prem Katha lead actor Akshay Kumar, “Cleanup marshals are the real heroes who are effectively doing their work with full dedication and helping our city become clean.”

To get an insight into the daily lives of cleanup marshals, Akshay Kumar requested them to share their experiences. When asked about one important principle that every citizen must religiously follow under Swachh Bharat Mission, a worker named Ajay Singh said, “Every citizen must be consciously aware that they should not litter anywhere. People, especially vehicle owners believe that the place to throw wrappers is roads. This should be changed, I request all vehicle owners to place a small bin inside their vehicle.” Sharing a ‘litter’ incident the actor explained how he tackled the issue of littering, “I saw a man throwing a plastic bottle from his vehicle, I immediately got out of my car and threw back the bottle in his car.”

A lady cleanup marshal highlighted the issue of spitting, “People don’t see where they are spitting, and it is like an ugly mark that one leaves in the society.” Talking about the problem of open urination and defecation another worker said that despite the government providing a public toilet every 1 kilometre, people prefer to relieve themselves in open, “Thanks to technology, people can find a toilet through google maps,” he added.

Speaking about the laid back attitude of people, the cleanup marshals said that they face a common problem when they fine people for violating rules, “Most of the time people don’t accept their mistake and when we make them aware about the littering they get aggressive. Merely imposing fines won’t bring the change; it is the behaviour of people that needs some amendment,” explained one of the workers.

There are even times when people try to threaten the marshals or use their power to avoid paying fines. “Well educated people who take their dogs out for a stroll show no regret for making their dogs defecate in public areas. On the contrary, they say that the purpose of taking dogs outside is to make sure they don’t dirty the home,” said Ajay Singh.

If some get aggressive then there are some who genuinely get apologetic, said one of the lady worker, “Once a boy didn’t have the money to pay the fine. He deposited his watch with us, went home got the money.”

Throwing light on the subject of film the ‘Khiladi’ actor said that though the movie is set in a village backdrop, the problem of open defecation isn’t just restricted to rural areas. “Defecating in open leads to several health problems, especially in urban areas where there’s so much of pollution anyway. It doesn’t take time for bacteria to cause infections.”

The promos of the film have caught attention, especially for its hard hitting dialogues.

To make the movie affordable to every citizen of India, the makers of film have even appealed for a tax exemption on tickets.

The movie starring Akshay Kumar, Bhumi Pednekar in the lead is scheduled to release on August 11.

Inspired By The Versova Cleanup Model, Centre To Launch A Similar Programme For 13 Other Beaches Across The Country