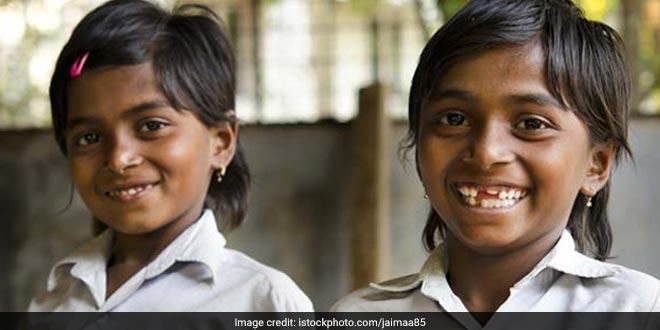 New Delhi: This International Girl Child Day, let us look at how a simple step can make a big difference in empowering girls to achieve their dreams. “I advised my sister not to leave school because I’ve already made that mistake,” says Ruby with her head bowed and her steady yet moist eyes fixed on the floor. The 20-year-old from a slum in Agra dropped out of school in the third grade as there were no toilets. Like other children, she was forced to defecate behind the school building in the open or she had to walk back home just to use the toilet. Most girls didn’t feel safe defecating in the open area due to the fear of being watched. They preferred to walk back to their respective houses, about a kilometre away, to use the toilets and return to school. But the walk was risky, due to violent incidences on the lonely streets.

Ruby’s younger sister, 15-year-old Nisha, an ambitious girl who aspires to be a doctor, also had a similar experience but luckily not for too long. As per statistics released by the Ministry of Human Resource Department in 2016, the number of dropouts amongst girls in upper-primary and secondary classes increased by almost 70 per cent as compared to the dropouts in primary classes. Even the enrollment of girls to every hundred boys decreased from 95 to 85 from upper primary to higher secondary classes.

A World Bank report published in July 2018 said that the lack of educational opportunities and barriers in completing 12 years of schooling for girls is costing countries anywhere between $15 trillion and $30 trillion dollars. It also pointed out that nine in ten girls complete their primary education, but only three in four complete their lower secondary education across the world. According to the study, the first among six primary reasons for this is that “schools are not equipped with necessary infrastructure” for girls to continue their education. If they have to continue in schools equipped with good resources, the cost is well beyond their means.

Nisha’s and Ruby’s struggle and fears were real and it is still a reality for thousands of girls between ages 10 to 17, living in poor and vulnerable conditions. Yet, Nisha’s story illustrates the fact that change is possible. Four years ago, in 2013, World Vision India, through the “Support My School” campaign, built separate toilets for girls and boys in Nisha’s school. “Now I don’t need to go home during school hours. Earlier, I missed school regularly due to lack of a toilet in the premises. I used to score less and felt extremely bad,” she says.

It was during those initial years until 2013 that Nisha used to repeatedly miss school due to lack of a sanitation facility. But Ruby’s words of wisdom and the relentless support of her father, a traditional shoemaker, and mother, a homemaker, inspired the younger daughter of the family to not to give up on school. “We used to get scared about Nisha coming home alone repeatedly, especially because there are several drunken men in this area. But now that the problem is solved, we are at peace,” says 40-year-old Pushpa, Nisha’s mother.

Also Read: Children As Agents Of Change: ‘I Learnt About Washing Hands In School, I Will Tell My Younger Brother And My Parents’

Nisha now has the means to achieve her dreams. A classroom where she can be educated and develop her knowledge and skills in a safe and hygienic environment. She has her space to participate and engage in co-curricular activities and friends with whom she can learn, share and grow. And she has all of this because of one small change- an accessible toilet in her school. “Since the installation of toilets, girls have outnumbered boys present in some of our classrooms,” says Rakhi, a teacher from the school.

Like Nisha, several other girl students have been restored their right to education, a right that was taken away due to lack of child, friendly spaces for girls. “The stability in the attendance of girls, that wasn’t present earlier, is now visible,” says Snehalatha, Nisha’s class teacher. “Before the toilets were built, nearly 40 per cent of female students dropped out of school. Now there are hardly any dropouts,” she adds.

The World Bank report highlights that “globally, women with secondary education earn twice as much as those with only primary education”. To build a skilled workforce of girls, it is important that we help them complete secondary education and a toilet in school is all we need to make the much-needed difference.

Related Topics:
Agra Toilets
Up Next

Groundwater Is A Finite Source, Will End One Day If We Fail To Reduce Its Exploitation: WaterAid India