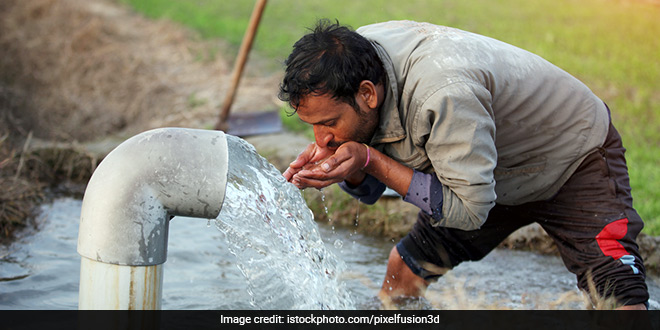 Mumbai: ‘The country is facing its worst water crisis in history and if no action is taken to address this, the demand for water would far outstrip its supply by 2030. In fact, even by 2020, it is expected that 21 Indian cities will run out of groundwater,’ underlines a report by NITI Aayog. India uses an estimated 230 cubic kilometers of groundwater per year, making it the world’s largest user of groundwater according to a World Bank report. If this trend continues then in the next 20 years, 60% of all India’s aquifers will be in a critical condition. And this will affect sustainability of agriculture, long-term food security, livelihoods, and economic growth.

Also Read: Do It Yourself: Here Are 5 Easy Ways For You To Recycle Wastewater In Your Household

Question: 21 cities are likely to run out of groundwater by 2020 according to the NITI Aayog report. What are the main reasons for excessive use of groundwater?

Puneet Srivastava: India accounts for one-fourth of the total groundwater extracted globally, more than that of China and US combined. The main reasons for rampant extraction of groundwater multiple. Right from poor ground water regulation, weak decentralised water governance processes and policies, unprecedented dependence on groundwater for all usages, rapid urbanisation, inequitable water distribution to poor information systems on scientific management of water, several reasons are responsible for deteriorating groundwater.

At the bottom of the water index for 2016-17 are Odisha, Bihar, Jharkhand, Uttar Pradesh and Haryana, which are major producers of paddy, wheat, along with a host of horticulture crops. What impact will the groundwater crisis have on India’s food production?

Groundwater dependent irrigation has played a major part in India’s story of being self-reliant in food production. Due to overexploitation of groundwater, food production will be adversely affected.

Question: Given that India has so many rivers, lakes, freshwater sources, why is 84 per cent of India’s water supply still dependent on groundwater?

Puneet Srivastava: With the advent of green revolution and development of new boring techniques, the groundwater dependency has expanded exponentially in past few decades, resulting in 84% of India’s water supply being dependent on ground water.  The main reasons for this increased dependency are reduced drilling costs, weak water policies and regulation (or absence of it) favouring exploitation of local spot sources and increased level of pollution in surface water sources forcing people to explore deep aquifers for access to safe water without any sort of treatment.

Question: When it comes to the economics of water there is no fixed rate or policy. People in some parts of India procure water for free from the government or groundwater extraction and some from private tankers. How big an issue is water fee in mismanagement of water resources?

Puneet Srivastava: The political economy of pricing and levying user fees on water is a big issue in India and a major contributor to mismanagement of water resources. Water pricing is the only viable and long-term solution to prevent wastage and mismanagement.

Imagine if municipalities start giving you a bill mentioning the household level consumption along with the right pricing for this precious and scarce resource, I believe it can work as an eye opener for people who waste water so conveniently. Maybe the right cost of water will prevent people from using a free supply of pipe water to wash their cars and might motivate them to use a bucket instead. For municipalities, this would mean that they are distributing water which is 100% metered and therefore monitored at users’ level. This will also help reduce water losses in transmission and distribution.

Question: Groundwater in 16 states of India is contaminated with uranium according to a study conducted by the Nicholas School of the Environment at Duke University in the US. How can safe drinking water be ensured, can such harmful elements like iron, Arsenic, Fluoride be removed from drinking water?

Puneet Srivastava: Most of the water quality problems that India is facing currently like the presence of fluoride, arsenic, iron, nitrate in ground water, can majorly be attributed to the over extraction of groundwater in many parts of the country. If we continue to depend on groundwater for most of our agricultural, industrial and domestic purposes, we will continue to dig deeper in search of water resulting into mixing of naturally occurring substances in water. On one end, this means that we have to spend an exorbitant amount of money on the treatment of water before supply along with the problems surrounded with lack of monitoring due to the absence of National Accreditation Board for Testing and Calibration Laboratories (NABL) in many parts of the country.

Therefore, to ensure safe drinking water for everyone, everywhere, the most viable option is to look for alternate safe ground water sources, undertake immediate measures to protect/ rejuvenate surface water sources which are not chemically and radioactively polluted and use it post proper treatment. The other options are adoption of rain water harvesting that can be used to collect water for domestic needs and also to recharge groundwater.

Question: When it comes to the quality of groundwater, what are the risks one needs to be aware of before using it as a source of drinking water?

Puneet Srivastava: There are a majority of health risks associated with the consumption of unclean water depending on the type of contamination. Today, it is important for people to know about the chemical and bacteriological contamination and what are the safety standards of drinking water as defined by the Bureau of Indian Standards (BIS 10500: Revised 2012) . People should be able to get their drinking water tested at government authorized laboratories and also understand the health risks that a person can face if any substance is present beyond permissible limits and what are the mitigation measures for the same that can be adopted accordingly. A few of health conditions related to bacteriological and chemical contamination in water are as follows:

The government should run programmes to make people aware of the water quality standards and health hazards associated with the consumption of unclean water. Also provide tools and required knowledge for promoting affordable and simpler ways of water quality testing methods at the individual household or community level.

Question: How does depletion of groundwater affect a common person and why is it important for consumers to understand the severity of the crisis?

Additionally, some of the most common long-term impacts of water scarcity are reduced production of crops or livestock for market, higher costs for goods and commodities, market shortages, increased need for imports and political stress becomes evident in places where communities are being impacted by shortages or economic pressures.

The extreme impacts that we witness include prolonged droughts, famine and starvation leading to mass migrations. Every year, lack of access to water forces thousands of people to migrate in search of water, food and jobs. Mostly, the poorest and the most marginalised across the country bear the brunt.

Puneet Srivastava: There is an immediate need to fill the knowledge gap and make people aware about the importance of water conservation. People need to understand that groundwater is a finite source and will end one day if we fail to reduce its exploitation and recharge it in time. The government also needs to undertake severe measures to regulate and monitor the use of groundwater resources.

Additionally, either by regulations or through incentives, rainwater harvesting at both individual and institutional level in rural and urban settings to reduce dependency on groundwater and enhance groundwater recharge should be taken up immediately.

Question: Why has rain water harvesting, mandated by law in Chennai failed to solve the water woes of the city?

What are the ways to monitor over-exploitation of groundwater?

Question: Why has the Government not yet been able to control undue groundwater extraction?

Puneet Srivastava: The governments will not be able to take on this challenge alone without people opting for a change in behaviour on undue ground water extraction. The big challenges before the governments for strict monitoring and regulation for undue groundwater extraction will be the lack of financial resources, impact on different segments of water users, ring fence the basic water supply from its impact and so on. In my opinion, the undue ground water extraction can be reduced by people through informed choices for behaviour change towards water use supported by policy and regulatory environment.

Also Read: Ganga Drying Up In Summer Could Be Due To Indiscriminate Use Of Groundwater: Researchers

Question: What are the latest technologies that the government can use to rejuvenate/sustain groundwater and surface water bodies?

Puneet Srivastava: As said earlier, it is not the government or technology that will determine the rejuvenation or sustenance of ground water and surface water, but the people supported by government and technology. We also need to talk about the importance of rain water harvesting, protecting surface water sources and treatment of waste water for reuse. There are several technologies available that can be adopted for wise water management, monitoring the quality and quantity of ground water, surface water and other related aspects.

What steps can be taken to improve groundwater availability in the future? What are some of the measures that can be implemented to check the groundwater depletion problem?

“Reduce, Reuse, Reinvest in Rain Water” in that order of priority.  The first is Reduce your water footprint, largely achieved through awareness, behaviour change and wise regulations in the water sector. The second is Reuse, meaning we need to budget and account for every drop that is waste water and has the potential to be reused after treatment. The third is about Reinvest in rain water meaning we need to make use of rain water and recharge our aquifers to keep the cycle moving.

Question: If you were to draw up a 5-point agenda to solve India’s groundwater extraction and contamination problem, then what would be the high priority measures?

Puneet Srivastava is the Policy Manager at WaterAid India. He has a deep understanding of the water and sanitation sector including institutional, technical and financial issues influencing the sector policies and its application. Puneet also brings to the table his vast experience of working in partnership with governments and other public sector organisations.