New Delhi: 19-year-old Mausam Kumari from Hardiya village of Nawada district in Bihar had always seen her mother and elder sister using any available piece of cloth during their periods and later hiding it somewhere. Often, during the next cycle, they would use the same dirty cloth. It is only in 2016, when Mausam became a part of an adolescent group in her village that she learnt about menstruation and hygiene; she decided to educate her mother, elder sister and the community at large about hygienic practices, how to manage menstruation better and break free of taboos on menstruation.

An Introduction To Menstruation And Hygiene

In 2016 the Population Foundation of India, a Delhi based non-profit organisation, decided to launch a campaign in Darbhanga and Nawada district of Bihar to educate young girls and boys about reproductive and sexual health, family planning, health issues in general, among other things. An adolescent group consisting of 15-18 girls from the village was formed and they would meet once a month and discuss a variety of issues.

Social Behaviour Change Communication (SBCC) materials like message boxes (Sandesh ka pitara) were given to every girl in  the group, which allowed them to raise questions anonymously and openly discuss taboo topics. Menstrual hygiene emerged as an important concern especially when one of the girls stopped coming to the meetings because she had got severe Leukorrhea (thick whitish discharge from the vagina), said Sheela Kumari, Block Consultant at Population Foundation of India.

Also Read: “I Have Never Owned Underpants, So How Could I Use A Sanitary Pad?”

Mausam and other girls questioned Ms Kumari about Leukorrhea and menstruation. Recalling the details, Mausam, leader of the adolescent group, said,

Sheela Ji asked us if we know what sanitary pads are. Honestly, we had seen advertisements for sanitary pads on TV but knew little to nothing about their usage and purpose. Following this, we were introduced to sanitary pads – how to use and dispose of a pad, how frequently it should be changed and the cost that is Rs. 30 for a pack. Sheela Ji also told us that it is not necessary to use a conventional sanitary napkin, we can also use a cloth pad but it should be hygienically prepared and washed. 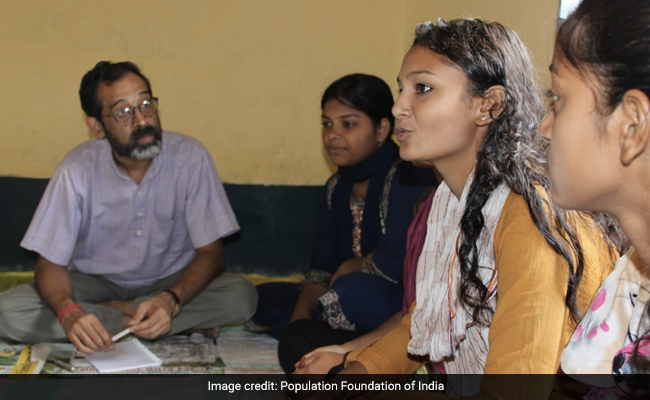 Since almost everyone in the group had financial constraints which meant lack of access to pads, Mausam initiated one of a kind pad bank where every member of the group consisting of 15-18 girls would save Rs. 1 a day to buy sanitary napkins and in turn, take care of their personal hygiene and health. Further talking about how pad bank helped non-members of the adolescent group, Mausam said,

Every month, two of us cycle to the nearest pharmacy which is 4 kms from our village and purchase pads for everyone. Since we buy in bulk, we get a pack of pads costing Rs. 28 for Rs. 25. This way, we save Rs. 3 on every pack and the money is further used to help others.

Menstrual hygiene management not only refers to women and adolescent girls using clean menstrual products like pads, clothes, or menstrual cups but also having access to safe and convenient facilities to dispose of used products. Talking about how the girls dispose of used pads, Mausam said,

We were told that regular sanitary napkins have plastic in them and ideally they should be incinerated but due to lack of facilities in the village, we should bury them deep. Burning them in the open will cause pollution and throwing them with regular waste would mean changing the location of the waste. Though burying is also not advised but that’s the only option available to us.

Menstrual Hygiene In Hardiya Village: Lack Of Education And Awareness

In the initial days of learning and setting up a pad bank, Mausam’s family was ostracised from the village because of the initiative. Recounting her struggle, Mausam said,

People started coming home to instigate my mother and then my mother would say, ‘What are you doing? Not everything needs to be discussed openly. It’s not like cooking a vegetable and telling the world that I made this dish today. Because of you, we are ashamed of stepping out.’

Also Read: How Did A Jharkhand District End Up Growing 5,000 Trees Through An Initiative To Promote Safe Use Of Sanitary Pads?

Mausam along with other girls kept on visiting people, talking about menstruation and slowly the villagers started accepting them. When a local newspaper covered the initiative, Mausam received appreciation from her brother and father.

There came a time when women from the village started coming to us asking for pads. During the later stage of the COVID-19 lockdown, we procured pads in bulk and distributed them among villagers. At the distribution drive, a man at a tea stall asked for bread. He mistook pads for bread. I don’t shy away from talking about menstruation to anyone so then and there I told him about menstruation and pads, said Mausam.

23-year-old Anu, one of the active members of the group, also shared similar challenges and said, they were not taught much about periods and menstrual hygiene practices in school. In fact, when a chapter on reproduction was being taught, boys were sent out of the class and the topic was rushed through.

We were not told about puberty, hormonal and physical changes, menstrual practices and other things. A school is a place where students learn and grow. It is pivotal for both boys and girls to know about each other’s bodies and growth. But if teachers will shy away, feel ashamed and not talk about something as natural as periods then how will we achieve better healthcare?, questions Mausam.

Anu noted that the lack of knowledge is prevalent across villages. She believes that while they have been able to overcome it to an extent, a lot of girls are still in the dark about these issues.

Rishu Prakash, Senior Programme Manager, PFI, Bihar said that in 2016, the team conceptualised the idea of working with young adults in 365 villages of four districts in Bihar. Talking about how the team creates awareness, Mr Prakash said,

PFI works closely with National Health Mission of the government and has developed social and behaviour change packet which has audio video material, comic book and other IEC (Information, Education and Communication) material to create awareness.

Mr Prakash added that in 2018, when pad banks were established and girls were informed about their health rights under centre’s Rashtriya Kishor Swasthya Karyakram (RKSK) which targets nutrition, sexual and reproductive health, injuries and violence, among others, they started to see gaps in the healthcare infrastructure of the state.

RKSK is a health programme for adolescents launched by the Ministry of Health and Family Welfare. It focusses on addressing the health needs of adolescents through a separate clinic for them where their clinical test can happen, young adults are given iron-folic acid tablets, free sanitary napkins, among other initiatives. When children learned about RKSK and started seeking medical help, they realised RKSK is not well implemented in Bihar. Out of the 38 districts in the state, RKSK is fully implemented in only 10 districts. Children would come to us and say, there are anganwadi centres for children, pregnant women and lactating mothers; hospitals for adults but no specific institution for young adults to raise their issues and seek guidance. The girls raised the issue with us, District Magistrate and even state health minister, he added.

The state government doesn’t provide free sanitary napkins instead under its Kanya Utthan Yojana, it gives Rs. 300 annually to female students of class 9-12 in government schools for the purchase of sanitary napkins. Kanya Utthan Yojana is not specific to menstrual hygiene. In fact, it offers incentives to girls under various situations like clearing class 10, 12, graduation and others. But for sanitary napkins, firstly, Rs. 300 annually is not sufficient and secondly, often girls tell us that they don’t get the money, said Mr Prakash.

Following Mausam’s complaints, an order was given to operationalise an adolescent health corner at the Sub Divisional Hospital (SDH) Rajauli. In addition, a trained Auxiliary Nursing Midwifery (ANM) was deputed to provide counseling services at the facility in November 2018.

The following year, Mausam and young leaders from other adolescent groups advocated for a fully functional Adolescent Friendly Health Clinic (AFHC). On September 24, 2020, an AFHC was inaugurated at the Pakribarawan Public Health Centre of Nawada district. The state government has approved the formation of AFHC in seven more blocks.

We aim to expand our initiative and help as many girls as possible, as every girl has a right to safe menstruation, said Anu.