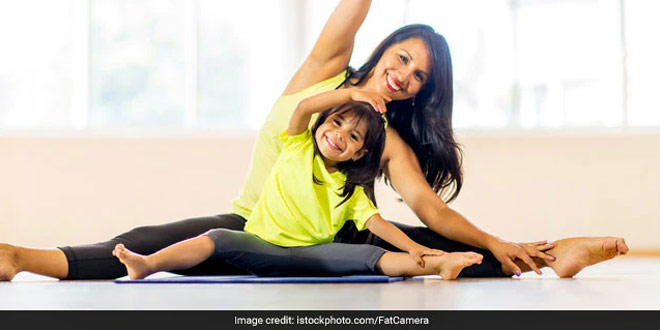 Here is a list of 5 fun and easy yoga asanas for children that they can incorporate into their lives, and enjoy themselves while doing so

New Delhi: Every year, International Yoga Day is celebrated on June 21 for its umpteen wellness factors. The health benefits of yoga are indeed numerous. It offers relief from various physical ailments, improves one’s mental health, and helps in detoxifying the body. However, it is quite an uphill task to make children understand the importance of yoga and tell them to follow a strict routine to engage in practising the asanas. But, fret not, as here is a list of 5 fun and easy yoga asanas for children that they can incorporate into their lives, and enjoy themselves while doing so!

One of the easiest yoga poses is the Utrasana which will strengthen and energize your child. All you have to do is ask your kid to kneel perpendicular to the floor with their toes apart and stretch back their hands in such a position that their fingers touch the heel. The position should be held upto 5-10 breath counts before your kid exhales. Utrasana helps in toughening the back and thigh muscles along with overcoming slouchiness.

Matsyasana or the Fish Pose is another interesting asana for children to try. To practise this pose, one has to lie on their back by joining their hands and feet together. Once the child is comfortable in the position, they should slowly lift their body and curve their back gently until their head touches the floor. The position should be held for a few seconds before returning to the original position. Matsyasana is known to stretch stomach, and chest muscles. It also improves digestion and cardiovascular systems.

The Bow pose or Dhanurasana will relieve your kid from stress and improve their mental health. To ace this position the child has to lie on their stomach, keeping the feet apart. Next, they should fold up their knees while stretching their arms behind. Ask the toddler to gently lift up their chest and look straight in front. They should stay in the position for 15-20 minutes before relaxing. Dhanurasana is a great way to boost one’s stamina as well.

Literally known as the Child’s Pose, Balasana is one of the easiest to perform. Adolescents should keep their knees flat on the yoga mat while stretching out their arms, keeping their fingers and forehead planted to the ground for about 5 minutes. The child should focus on their breathing. Once your child gets in the habit of performing the Balasana, it would render a calmness in them.

Although the name sounds funny, if practised properly, Gomukhasana enables the release of stiffness from the shoulders and the hip area, enhancing flexibility and improving stress. To perform this asana, the kid has to sit upright on the ground, stretching out both of his knees. Next, the left knee should be bent while the right leg should be placed over the left thigh. After the position is achieved, both the arms should be stretched from behind, until the hands meet. This posture with hands clasped from behind and one leg of the other should be maintained for about one minute before doing the reverse. These asanas are not only easy to perform but also quite enjoyable for your kids. These yoga poses if practised with consistency will improve your child’s wellness and help them in achieving physical, mental, and spiritual stability.

During his speech at the UN General Assembly on September 27, 2014, Prime Minister Narendra Modi first floated the idea of International Yoga Day. The draft resolution passed by India was supported by 177 nations. With universal recognition and growing popularity of Yoga, the United Nations declared June 21 as the International Day of Yoga on December 11, 2014. The first International Yoga Day was celebrated on June 21, 2015.