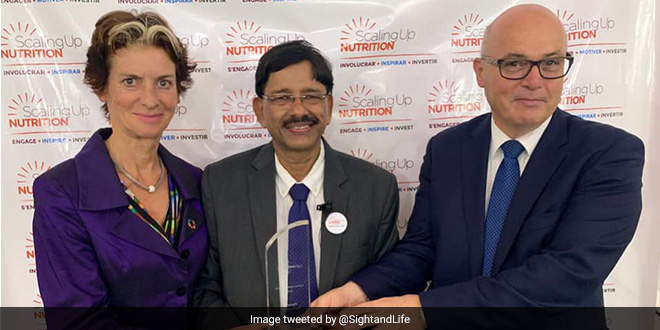 New Delhi: “To do away with malnutrition and micronutrient deficiency is as urgent and as important as it was to banish such evils as slavery. I say this since we can’t let millions of human beings to be held hostage to malnutrition. To allow them to be hostage is a crime against humanity. To ignore their plight is criminal,” says Basanta Kumar Kar who has been awarded the Nutrition Leadership Award 2019 on Tuesday (November 5) for his contribution towards nutrition by a humanitarian organisation Sight and Life, a nutrition think tank based out of Switzerland and working in over 80 countries across the world. Mr. Kar, who is the Country Director of Project Concern International (PCI), is also known as the ‘Nutrition Man’. While talking to NDTV about his experience in tackling malnutrition in India, Mr. Kar emphasized the importance of engaging the masses in the efforts towards improving nutrition and ending hunger in the country. He also said that the governments at the state and local levels must invest in eradicating malnutrition for the overall growth of the people and the country as a whole.

As a development professional, Mr. Kar who is also a member of the key advisory group on Nutrition in the NITI Aayog, is currently co-leading a comprehensive strategy in the East Indian state of Odisha, titled- “Mission Filaria, Malaria, and Malnutrition-Free Odisha”, keeping in context the grim figures, where Odisha contributes 40% of India’s total malaria burden and the poorest tribes are affected most by the triple burden of Malnutrition, Malaria and Filaria. He is also working with the Government of Chhattisgarh and demonstrated record reduction in malnutrition among children in the year 2006, Mr. Kar also led the first-ever nutrition policy of the state government of Chhattisgarh. He also supported the empowerment of over 10,000 marginalised women and girls for their election to local government positions (Panchayats) in Chhattisgarh to propel action on nutrition; for which he was also nominated for the India Innovation Award.

As Mr. Kar receives the awards prestigious award in a ceremony held at the UN-led Scaling up Nutrition Global Gathering (SUN GG) in Kathmandu, Nepal, Alok Kumar, Adviser at NITI (National Institute of Transforming India) Aayog, congratulated Mr. Kar through a tweet in which he said,

Congratulations Basant Kar. The recognition is eminently deserved and is a recognition of the labour of love and passion that you and your organisation bring to bear upon the cause of the battle against malnutrition in India. I am so happy for you.

Congratulations @basantak . The recognition is eminently deserved and is a recognition of the labour of love and passion that you and your organisation bring to bear upon the cause of battle against malnutrition in India. I am so happy for you.

Talking about why he was inclined towards working on nutrition, Mr. Kar said,

I come from a small village in Odisha where I witnessed poverty and the struggle for good nutrition up close. As I grew up, I found my true calling to eliminate malnutrition and develop human potential for a more peaceful, prosperous and just world.

Mr. Kar told NDTV that nutrition has the ability to empower people as it makes them healthy and improve their productivity. Thus nutrition helps in improving health outcomes, economic outcomes and eventually social outcomes in society as with better health and empowerment comes social equality, said Mr. Kar. He further said that for a healthy future, it is important to focus on the first 1,000 days of a child which starts from the day the child is conceived to its second birthday. The first 1,000 days are extremely crucial as these lay the foundation of a person’s whole life and health.

Also Read: Other Than Junk Food, Here’s Another Factor That Can Cause Childhood Obesity

Malnutrition Should Be Tackled At The Micro Level, Recommends The ‘Nutrition Man’

According to Mr. Kar, there is a need to track the nutritional status of people at block and panchayat level to determine proper planning to combat malnutrition. He says that a comprehensive micronutrient study should be done at all levels. He said,

In a diverse country like India, in order to address malnutrition, it is important to consider the complexity of the demography of each place. A single formula cannot be used for every village because of barriers like culture, food habits, income, gender inequality and social discrimination. Thus there is a need to design such public interventions that keep the nature of the community into consideration.

Mr. Kar asserted that due to inequality and poverty, ill-health become just a way of life for marginalized communities. This is because malnutrition and health issues are lower in the list of priorities for those who are struggling to feed their families. While there are a number schemes of the government to combat public health concerns like Integrated Child Development Services (ICDS), National Health Mission, Janani Suraksha Yojana, Maternity Benefit scheme, Mid-Day Meal Scheme and National Nutrition Mission, but there is still a long way to go.

He said that malnutrition needs to be tackled at the micro-level and so community engagement is must to put a dent in undernutrition. Mr. Kar says,

‘Change leaders’ should be made within the targeted communities, ‘peer counsellors’ must be identified, and support groups must be created. For this women and girls should be encouraged. Working in many villages across the country we realized that it is necessary to have women leading interventions where they could encourage other women too so that eventually women can become empowered enough to at least have a say in the matters of health and nutrition at home.

There Is An Urgent Need Of National Food And Nutrition Security Act, Says Mr. Kar

India is facing multiple burden of malnutrition in the form of stunting and wasting, anaemia, and obesity, more prevalent among women and children. Thus there is a need to invest in interventions that are focusing especially on women and girls because the health of a society depends upon the health of its women.

Mr. Kar asserted that there is a need to collect and collate high-quality evidence/data to provide better insights on working towards nutrition. The data should be revised at least once in three months so that the impact of interventions can be tracked properly, he said.

While signing off, Mr. Kar said that he is optimistic about India achieving the 2030 target of ending malnutrition and hunger as laid under the Sustainable Development Goal Two and roots for the government and community working together for this. He highlighted that India’s Poshan Abhiyaan, a central government scheme for holistic nourishment, is gradually becoming a mass movement as the citizens are becoming aware of the urgency to eliminate malnutrition.