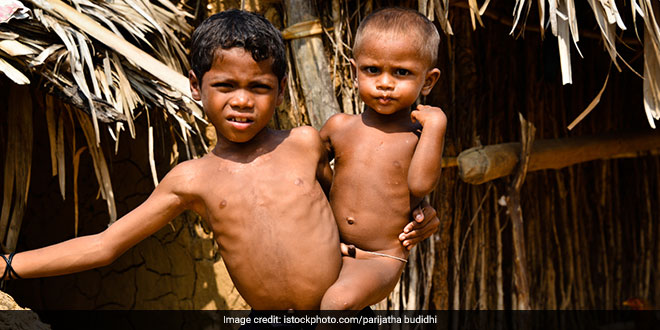 New Delhi: Of the 1.04 million under five deaths in India in 2017, over 7 lakh (706,000) can be attributed to malnutrition, reveals the findings of the India State-Level Disease Burden Initiative’s report. The report covers in detail the disease burden of child and maternal malnutrition and trends across different states from 1990 to 2017. The findings released on September 18 highlights the status of all states and union territories in terms of child stunting (low height for age), low birth weight, child underweight, overweight, exclusive breastfeeding, child anaemia and women anaemia. For this analysis, the report considered the total population of under-five children and women aged 15-49 years in India.

Here Are The Key Findings Of The Global Burden Of Disease Study 1990-2017 On Nutrition And Health Of Mother And Child In India:

Number of children under the age of five dying due to malnutrition has dropped by two-thirds from 1990 to 2017. Despite the huge drop in malnutrition deaths, it continues to be an underlying risk factor for 68 per cent of the deaths among children under the age of five in India. It is also a leading risk factor for disease burden in persons of all ages contributing 17 per cent of the total DALYs (disability-adjusted life years).

The disability-adjusted life year (DALY) is a measure of overall disease burden, expressed as the number of years lost due to ill-health, disability or early death. One DALY can be thought of as one lost year of a healthy life.

The major reason behind malnutrition resulting in diseases and death in children under five years in India is neonatal (newborn from birth to 28 days) disorders which is then followed by lower respiratory infections, and diarrhoeal diseases.

Low birth weight is defined as the birth weight less than 2.5 kg. Among the malnutrition indicators, low birth weight is the largest contributor to child deaths in India, followed by child growth failure which includes stunting, underweight, and wasting. In 2017, the prevalence of low birth weight among children under five was 21.4 per cent, which is an improvement from 23.1 per cent in 2010.

An abnormal or excessive accumulation of fat in the body that poses risk to the individual’s health is known as being overweight or obese. In 2017, the prevalence of child overweight was 11.5 per cent, up from 8.1 per cent in 2010. The continuous rise in prevalence of overweight children in India is a matter of concern as adverse effects on health during early childhood can have long term, adverse effects on health during the later phase of life.

Child overweight parameter was highest in Telangana, the youngest state of India but it is rapidly increasing in all other states. This annual rate of increase between 1990 and 2017 was 5 per cent in India.

5. Anaemia Among Children Under Five