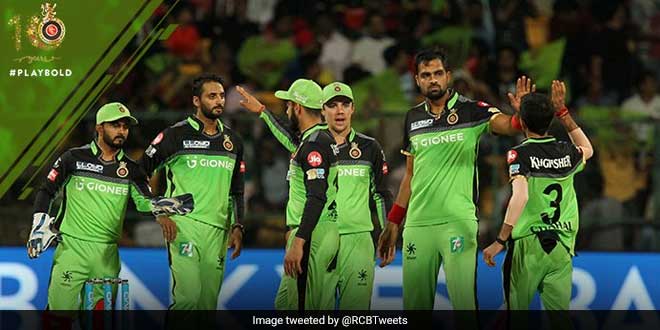 During a match between the Royal Challengers Bangalore (RCB) and Kolkata Knight Riders at M Chinnaswamy Stadium in Bengaluru on May 7 (Sunday), RCB players took everyone by surprise when they donned the ‘Green Jerseys,’ instead of regular red colour. This was done in order to spread awareness about the importance of environmental conservation, as a part of Royal Challengers Bangalore’s ‘Go Green’ initiative. What’s interesting is that the green jerseys were made of approximately 11,000 plastic bottles.

Even though Virat Kohli-led Royal Challengers Bangalore lost the match but it surely won millions of heart with its strong ‘Save The Environment And Opt Recycling’ message.

This is not the first green step taken by RCB. Since 2010, in one of their home games, the players wear a special green uniform to spread the ‘go green’ message and raise awareness among people about environment conservation.

RCB Wears Green Jerseys In Hope To Save The Planet

A video released by the Royal Challengers Bangalore explaining the concept of the ‘Go Green’ initiative said,

“The idea of recycled polyester was derived from the waste of pet bottles found and thrown in and around the stadium during the IPL seasons. The waste of bottle is collected and converted into a filament to make a high end eco-friendly fabric.”

This time RCB’s ‘Go Green’ initiative has used around 250 kilograms of PET bottles which is approximately 11,000 bottles. This green kit is surely reducing some load from India’s ongoing waste woes – By recycling of 1 tonnes of plastic bottles, the initiative is saving 7.4 cubic yards of landfills space. Adding to the list of benefits, recycling of waste bottles resulted in reduction of energy by 85%, water consumption by 90% and carbon emission by 65%.

These Green Jerseys have 50% less carbon footprints than any other materials including the organic cotton.

RCB believes Sports provide a unique platform to spread the message on environmental conservation and thus embarked on a journey to facilitate vital environmental responsiveness, reaching out to fans and the greater public, sates the official website.

Apart from this recycle plastic initiative, RCB has also initiated a comprehensive waste management programme for all the home matches at Chinnaswamy stadium. The team has collaborated with Saahas, an NGO, to ensure that waste is managed effectively.