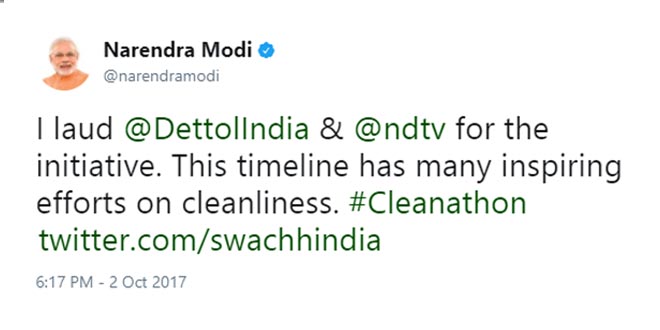 New Delhi: Prime Minister Narendra Modi today praised the 12-hour Swachh India Cleanathon undertaken to celebrate Gandhi Jayanti on October 2 as Rashtriya Swachhta Diwas. Cleanathon into its fourth year is a part of NDTV-Dettol Banega Swachh India Campaign, with Amitabh Bachchan as the Campaign Ambassador. It promotes the #Mere10Guz agenda which believes that if every Indian cleans up 10 yards of his surroundings, India will become a clean country. This year the Cleanathon took a holistic approach to swachhta and widened the scope of its campaign to include Swachh Zameen (land), Swachh Hawa (air) and Swachh Pani (water).

The Prime Minister tweeted his appreciation for the campaing, “I laud @DettolIndia & @ndtv for the initiative. This timeline has many inspiring efforts on cleanliness. #Cleanathon https://twitter.com/swachhindia,” the PM tweeted.

I laud @DettolIndia & @ndtv for the initiative. This timeline has many inspiring efforts on cleanliness. #Cleanathon https://t.co/XXgyysJKCO

As a part of Cleanathon, various cleanup drives have been organised – From Bengaluru Metro site, to Varanasi’s Araji Line village where PM Modi recently did a shramdaan for construction of toilets, from Delhi’s RK Puram school, to Scindia school in Gwalior, the Cleanathon saw active particiaption through the day.

Apart from the cleanup drives at various locations, many Chief Ministers, celebrities, and well-know personalities joined the Cleanathon through the day.

Whereas Chhattisgarh Chief Minister, Raman Singh added, our government has prioritised behavioural change in sanitation, resulting in 8,000 panchayats in the state becoming open defecation free. With this progress the state’s urban areas have achieved the ODF certificate today.

Meanwhile Madhya Pradesh Chief Minister Shivraj Singh Chouhan added, we are happy to announce that the urban state has turned ODF, Hoshangabad and Shahjahanpur being the latest ones to get the ODF title. For rural areas, we have set October 2018 as the ODF deadline.

Apart from sanitation, the other overarching theme of the Cleanathon was the crisis India faces in terms of waste disposal, be it in terms of its overflowing landfills, dying rivers or plastic belching oceans.

Actress Dia Mirza talks the idea of Swachh Bharat and said, a comprehensive waste management model is needed where usage of single use plastic is encouraged, which can be later used for initiatives like building roads.

While,  Raveena Tandon added that somewhere there is an need to make people realise that there are alternatives available which should be used. She also urged people to opt for eco-friendly festivals to make festivals more enjoyable without harming the environment.

This year October 2 also marks the third year anniversary of the Swachh Bharat Abhiyan which was launched by the Prime minister in 2014, on Mahatma Gandhi’s birth anniversary. Since then India’s sanitation coverage has increased to 65.7% today from mere 37% percent three years ago. The aim of the campaign is to construct 11 crore toilets and make India free from open defecation completely by 2019.