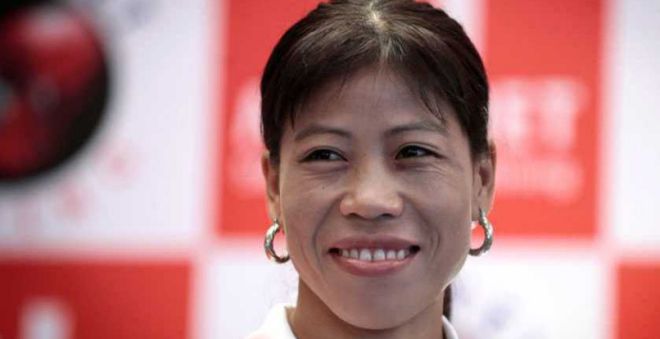 New Delhi: Olympic bronze medalist and Rajya Sabha MP M C Mary Kom joins India’s biggest cleanliness movement yet again – this time she has sponsored construction of five toilets at Golmuri police line in Jamshedpur. Four months ago, the East Singhbhum district unit of Jharkhand Police Association had approached Mary Kom for her help to construct toilets in their location to which she promptly agreed.

Mary Kom agreed to sponsor five toilets in the police line in Golmuri here. The construction of the toilets has been completed and since yesterday people here are rejoicing the benefits of using a toilet, said the Secretary of the Association, Santosh Mahato.

When Swachh Bharat Abhiyan was flagged off on October, 2014 by Prime Minister Narendra Modi, Mary Kom was nominated as one of the Swachh Ambassadors in India to carry forward the swachhta mission in full swing.

That time Mary participated in the clean-up abhiyan in Imphal and pledged to carry the Swachhta mission ahead in whatever way possible, she said,

The Prime Minister has set in motion a chain by inviting nine individuals from different walks of life. I took up the initiative here in my land to take the movement forward.

This help from Mary Kom comes at a time when Jamshedpur is fighting hard to improve its Swachh Survekshan ranking. Last year, Jamshedpur was ranked 64 among 434 cities in India. Apart from construction, the city is also focusing on giving community toilets located across the city and Sitaramdera bus terminus a sparkling look. For this, two private agencies have been hired by the civic body. They will be responsible for cleaning the toilets twice daily, once in the morning and evening.

Apart from this, to stop open defecation, the flying squad committee of Jamshedpur Notified Area Committee (JNAC) that will comprise a magistrate, a sanitary inspector and four cops, will now take rounds of vulnerable points, twice a day.

If You Are Living In Delhi And Are Found Littering Or Not Segregating Waste, Be Ready To Pay Fines

With Improvement In Technology, Finer Particles May Turn Up As Next Enemy, Say Experts