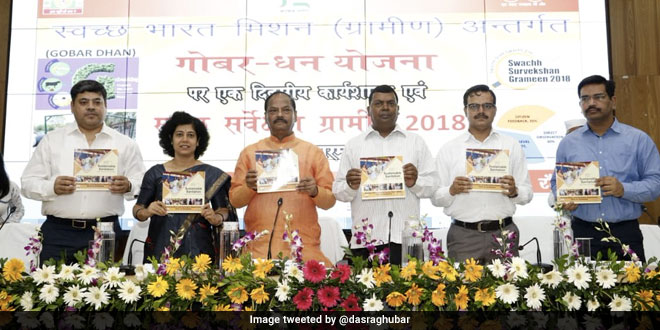 New Delhi: Jharkhand Chief Minister Raghubar Das participated in workshop on GOBAR (Galvanizing Organic Bio-Agro Resources – DHAN, to kick-start the use of biogas and organic waste for energy generation purposes in the state. The workshop, held on July 23, also saw the Jharkhand Chief Minister speak extensively on the Swachh Bharat Abhiyan and the state’s performance in the cleanliness mission. CM Raghubar Das said that cow dung, household and agricultural waste would be used extensively by the state to produce biogas. Using waste for biogas production will also ensure that villages and cities in the state remain clean, said the Chief Minister at the event. The CM also launched an ODF sustainability guide for districts to follow and felicitated the districts that have recently become open defecation free.

Jharkhand’s performance in the Swachh Bharat Abhiyan has been impressive. The state has rural sanitation coverage of 84 per cent, and was awarded the best performing state in the Eastern zone in this year’s Swachh Survekshan (Urban). Chief Minister Raghubar Das said that Jharkhand’s performance in the Swachh Bharat Abhiyan since 2014 has been successful because of large scale participation of the local population. The Chief Minister said that the same enthusiasm should be shown by the people of Jharkhand towards the GOBAR DHAN initiative. Mr Das said that women affiliated to Self-Help Groups (SHGs) can make list of households with cattle, and use the dung to produce biogas or manure. Farmers can use the manure instead of fertilisers, for healthier crops.

A clean village, without waste or open defecation ensures a healthy village without diseases. I encourage farmers to use manure from cow dung, as it is healthy and does not harm the crops, said Chief Minister Raghubar Das at the event.

The Chief Minister encouraged people to use agricultural waste as raw material for manure, instead of burning it. Mr Das also encouraged the setting up of biogas plants, as the Centre provides subsidies of up to 100 per cent for biogas plants manufactured by gram panchayats. He requested that similar to the Swachh Bharat Abhiyan, the GOBAR-DHAN scheme should be turned into a people’s movement.

Talking about Jharkhand’s progress on the sanitation front, the Chief Minister said that the state had rural sanitation coverage of merely 18 per cent in October 2014. Jharkhand’s successful journey from 18 per cent to 84 per cent has been made possible due to people’s participation, he also said that the state will be open defecation free by October 2, 2018, on the occasion of Gandhi Jayanti. Special focus will be on the three trailing districts of Godda, Palamu and Gumla as making these open defecation free will complete the state’s Swachh Bharat Abhiyan goals, said Chief Minister Raghubar Das.