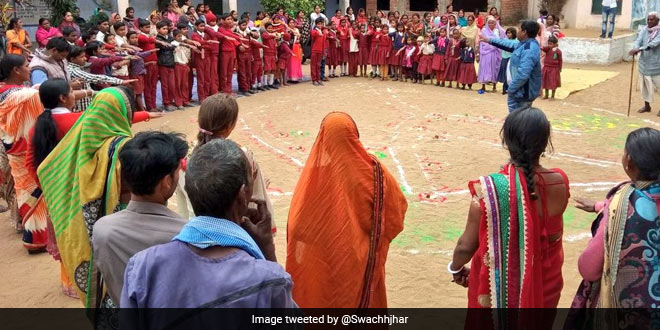 New Delhi: Records, it is said, are meant to be broken. Swachh Bharat Abhiyan’s success in constructing over 6 crore toilets since 2014 is a record in itself, but under the overarching umbrella of the Central sanitation mission, many states are creating their own records. The latest entrant in this list is Jharkhand, which managed to construct over 1 lakh toilets during the course of mere eleven days, across all its districts. The feat was achieved over the first eleven days of February, and is a part of the state’s mission to construct three lakh toilets in a month, starting from January 26, 2018.

Jharkhand has been an average performer under the Swachh Bharat Abhiyan between the years 2014-15 and 2015-16, constructing merely 3.6 lakh toilets in two years. However, in the next two financial years, the state upped its toilet construction, managing to construct over 16 lakh toilets and taking the state’s sanitation coverage up to 69 per cent, from 30 per cent in 2014. The state has set itself a deadline of going open defecation free (ODF) by October 2, 2018, a year before the national deadline for Swachh Bharat Abhiyan’s ODF goals.

In the last two years, we have undertaken a very determined campaign to build toilets as well as build awareness among people on safe sanitation. We don’t want toilets to be built just for the sake of it. People are using the toilets they are building, which is why we are confident of meeting our ODF deadline, said Dinesh Kumar Singh, Joint Director of SBM Gramin, Jharkhand.

Over one lakh masons have been recruited by the state government across its 24 districts. The state requires around 12 lakh more toilets to become ODF and the state government has estimated that construction of over two lakh toilets each month within the next six months is what is needed to achieve its ODF goal. The district officials have been entrusted with the responsibility of monitoring blocks and keeping a tab on ODF coverage, and providing real time information to the state’s rural sanitation department. Sanitation teams visit districts regularly to check on the usage of toilets in ODF areas is. All this has ensured that toilets are not just being built but are also getting used by the people.

“As we approach our ODF deadline, we are ensuring that the toilets are adequately used as well. Apart from district officials, we have engaged Swachh Bharat preraks, NGO members, Anganwadi workers and volunteers to monitor toilet usage across the state. They have done a commendable job in spreading the message of safe sanitation and encouraging people to use toilets,” said Mr Singh.

Jharkhand also organises Swachhta Diwas on the 19th of every month across all the schools in districts to ensure that the awareness and enthusiasm generated does not peter out over a period of time. On the 2nd of every month, a Swachhata Sabha is organised across all gram panchayats where discussions on toilet status, usage status and ODF status are held so that residents are up to speed with developments on the sanitation front. The state’s massive jump in toilet construction and sanitation coverage has propelled Jharkhand to a state which is capable of becoming ODF by October 2018. The need of the hour is ensure that this momentum is sustained.

Use Toilet And Get Paid At This Ahmedabad Café