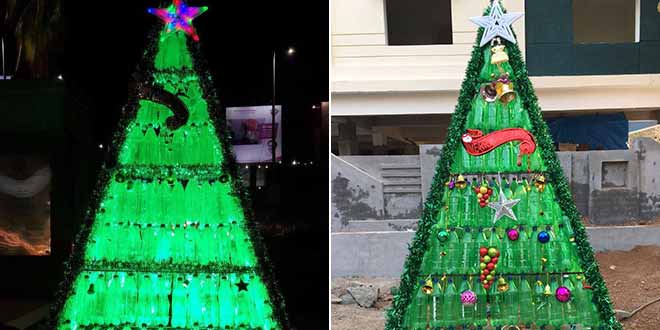 New Delhi: From an eco-friendly Ganesh Chaturthi, a cracker free Diwali, building toilets as a Rakshabandhan gift to a ‘bin-dandiya’ Navratri, name any festival and you may find a Swachh Bharat Abhiyan agenda. If one closely tracks last three years, one may find that every festival this year was given a touch of concepts like waste management, open defecation free, sanitation. With Christmas and New Year just round the corner, the cleanliness movement has once again taken pace and is ready to make yet another festival eco-friendly. And it is none other than Hyderabad, a city which has won many accolades for taking advantage of its trash, who is celebrating a green Christmas. 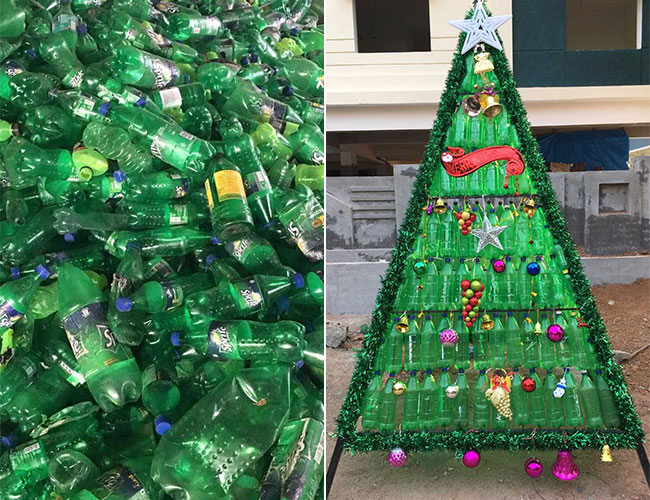 A local recycling enterprise called Bamboo House India is famously known for putting waste to use and creating something useful out of it. After making a bus shelter from plastic bottles, a conference hall out of bamboos, sofa sets out of tyres and street furniture from scarp materials, the enterprise has now created Christmas trees out of plastic bottles. The project is carried out in collaboration with the Greater Hyderabad Municipal Corporation (GHMC) with the labour cost is being borne by the corporation. 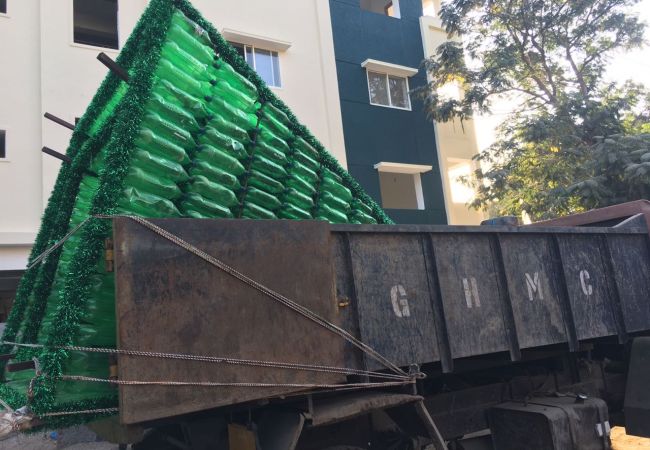 Six Christmas trees have been made from plastic bottles

Every year the civic body places plastic trees which cost upto Rs 20,000 across the city and eventually they end up in landfills thus harming the environment. I think the phenomena of eco-friendly Christmas trees is global movement to show we believe in sustainability… the biggest such tree is kept in Rio De Janeiro. It is no more limited to huge organisations; even a layman can recycle his household trash. With this very message, went ahead with this project. 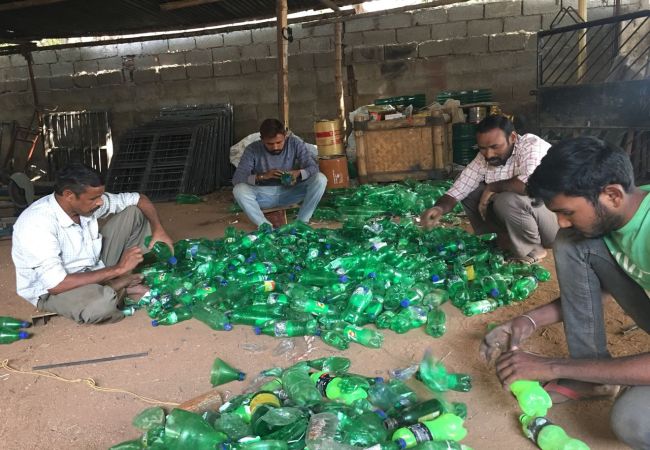 A total of 5,000 discarded plastic bottles were purchased at Rs 2-4 per bottle from 50-60 local scrap dealers out of which 2,000 green bottles have been put to use. The green bottles were reused to make 6 Christmas trees says 42- year old Prashant Lingam, the founder of the organisation. 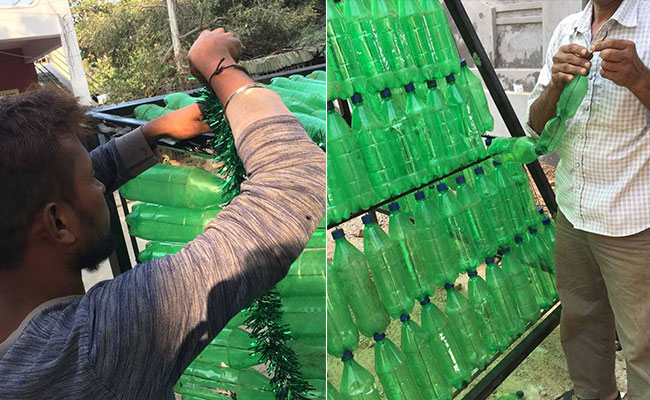 A team of five artisans worked rigorously for 10 days round the clock so that the trees could be placed on the streets throughout the festive week. Each tree is made with a height of about 10 feet.  Metal anglers are welded with the bottles to support the trees. The trees are placed in prime locations of the city to grab as many eyeballs as possible and inspire people to end the year on a waste-free note. 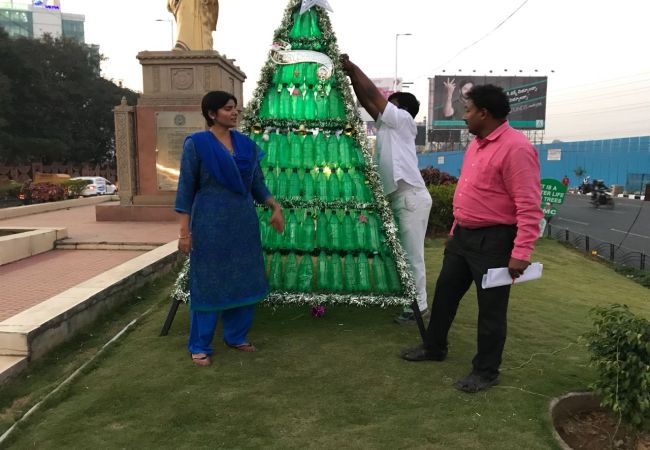 Talking about the problems the team faced while making trees Prashant says,

During the collection stage, we fell short of green bottles as most of them were crushed, flattened and not in a good shape. However with not much option left, we purchased them nonetheless. But the artisans had a lot of problems in framing those bottles. 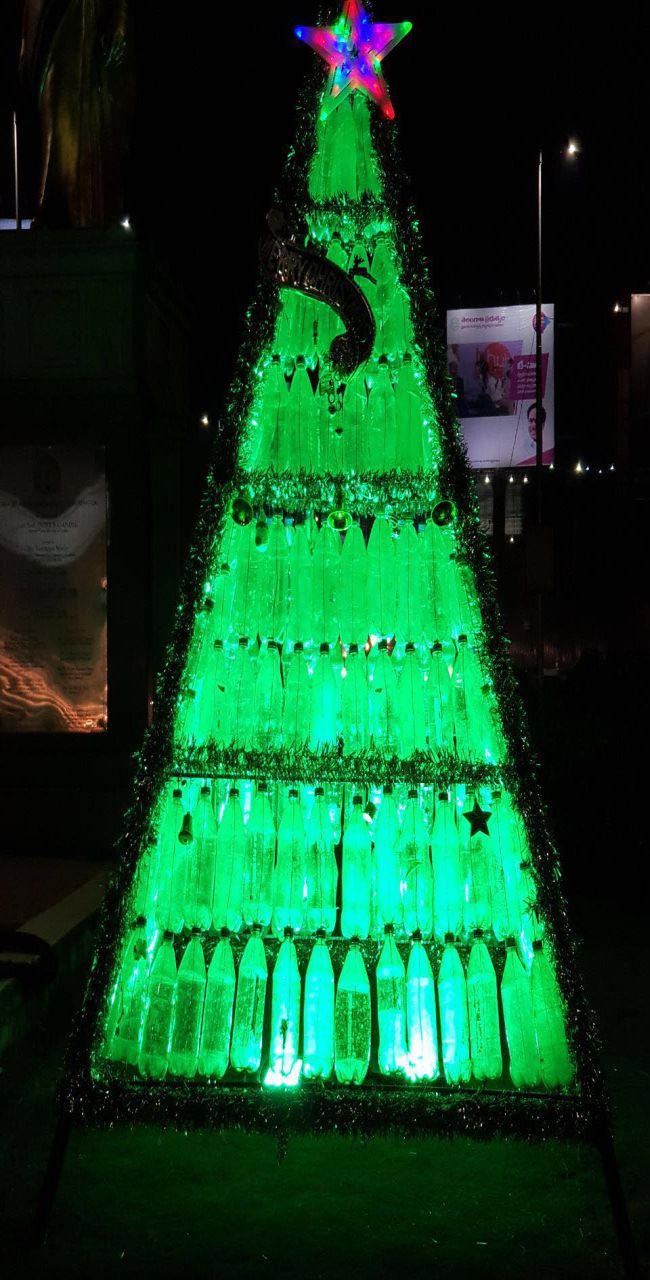 When the team was in the ‘separating’ stage of initiative, it recognised a grim problem that city is going through explains Prashant, “When we were separating green bottles from the rest of the bottles, there were other kinds of waste intertwined. This only goes to show that citizens are not efficiently practicing waste segregation. Source segregation is not happening at ground level. We really had a tough time in cleaning these bottles.” The team had originally planned to carve out Christmas trees for all the five zones of Hyderabad however the segregation activity consumed a lot of their time and hence the trees are placed only in the West zone.  Once the festival is over, the structures will be dismantled and the bottles either will be reused or sold it to recycling centres.

In Jammu’s Dansal, A Swachh Turnaround Sees Increase In Sanitation Coverage By 54 Per Cent In Just A Year