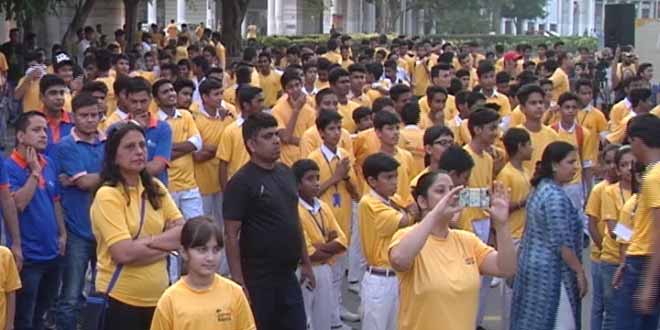 New Delhi: It was 6 am on a lazy Sunday morning and thousands gathered in New Delhi’s Connaught Place. You might think they are attending Rahagiri for fitness but you are just 50% correct. Thousands gathered to not just to work out but to run for a cause, run to keep their surroundings clean. The event organised by Keep India Beautiful, an NGO that promotes two very closely knit things – Fitness & Cleanliness. Vishal Sethi, the CEO & Director of Keep India Beautiful explains, “Untill you are fit & healthy, you won’t be able to do anything for the society. If you want to give anything back to the society then you need to be fit in the first place.”

The NGO is run by a bunch of fitness enthusiasts which explains the primary concept behind the event.

Puneet Puri, the Founder & Director the Keep India Beautiful said, Fitness is incomplete if the surroundings aren’t clean. If your neighbourhood is clean then it’ll help you live a healthy life.

The event was supported by many organisations including the New Delhi Municipal Corporation. NDMC workers are the silent warriors that clean the streets of Delhi even before one wakes up. To support the cause over 500 students from NDMC’s schools were also present. The run was flagged off at 7 am. The entire contingent took a couple of rounds of the inner circle in Connaught Place and then armed with brooms, safety gloves and garbage bags they cleaned the streets in no time. In just a few minutes, the NDMC garbage bins were full and the workers took the trash out.

There have been many occasions where the city has organised cleanliness drives but ironically what is left behind are waste paper cups, plastic bottles, banana peels and even more filth. But this time around one couldn’t find garbage at the venue even though the place hosted more than a thousand people.

Goa Puts A Ban On Open Cooking By Tourists, Claims It Dirties The Surroundings And Is Unhygienic

For A Clean And Green Air, Scientists Create Fuel From Methane Using Oxygen