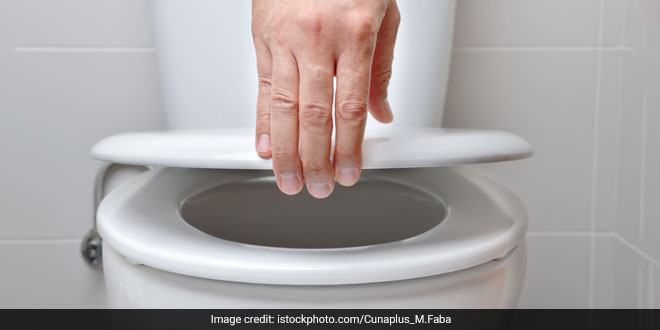 Washington DC: Besides washing hands and wearing masks, it is also important to close the toilet lid before flushing to contain the spread of COVID-19, as per a new study. According to a new study cited by The Washington Post, scientists who simulated toilet water and airflows, have found that flushing a toilet can generate a plume of virus-containing aerosol particles that is widespread and can linger in the air long enough to be inhaled by others. The novel coronavirus has been found in the faeces of COVID-19 patients, but it remains unknown whether such clouds could contain enough virus to infect a person.

“Flushing will lift the virus up from the toilet bowl,” co-author Ji-Xiang Wang, who researches fluids at Yangzhou University in Yangzhou, China, said in an email.

Dr Wang stressed that bathroom users “need to close the lid first and then trigger the flushing process” and wash hands properly if the closure is not possible.

Also Read: In The Size Of 22 Football Fields, Delhi Gets The World’s Largest COVID-19 Care Facility, With Recyclable Beds

As one flushes the toilet with the lids open, bits of faecal matter swish around so violently that they can be propelled into the air, become aerosolised and then settle on the surroundings. Experts call it the “toilet plume”.

Age-old studies have been made to understand the potential for airborne transmission of infectious disease via sewage, and the toilet plume’s role.

Scientists who have seeded toilet bowls with bacteria and viruses have found contamination of seats, flush handles, bathroom floors and nearby surfaces. This is one reason we are told to wash our hands after visiting the toilet.

Public bathrooms are well known to contribute to the spread of viruses that transmit via ingestion, such as the noroviruses that haunt cruise ships. However, their role in the transmission of respiratory viruses has not been established, said Charles P Gerba, a microbiologist at the University of Arizona.

The risk is not zero, but how great a risk it is, we do not know. The big unknown is how much virus is infectious in the toilet when you flush it … and how much virus does it take to cause an infection, said Dr Gerba, who has studied the intersection of toilets and infectious disease for 45 years.

A study published in March in the journal Gastroenterology found significant amounts of coronavirus in the stool of patients and determined that viral RNA lasted in faeces even after the virus cleared from the patients’ respiratory tracts.

While another study in the journal Lancet found coronavirus in faeces up to a month after the illness had passed. Scientists around the world are now studying sewage to track the spread of the virus.

According to the researchers, the presence of the virus in excrement and the gastrointestinal tract raises the prospect of transmission via toilets, because many COVID-19 patients experience diarrhoea or vomiting.

A study of air samples in two hospitals in Wuhan, China found that although coronavirus aerosols in isolation wards and ventilated patient rooms were very low, “it was higher in the toilet areas used by the patients”.

Also Read: Delayed Admissions And Lack Of Healthcare Workers, Doctors Talk About The Challenges Faced By Hospitals In Tackling COVID-19

The Centers for Disease Control and Prevention (CDC) says it remains “unclear whether the virus found in faeces may be capable of causing COVID-19,” and “there has not been any confirmed report of the virus spreading from faeces to a person”.

Wang decided to use computer models to simulate toilet plumes while isolating at home, as per Chinese government orders and thinking about how a fluids researcher “could contribute to the global fight against the virus”.

Particles can reach heights of more than three feet and float in the air for more than a minute, it found.

The paper recommends not just lid-closing and hand-washing, it urges manufacturers to produce toilets that close and self-clean automatically. It also suggests that toilet-users should wipe down the seat.

Dr Gerba, however, said seats should not be a major concern. Research has found that public and household toilet seats are typically the cleanest surfaces in restrooms, he said, probably because so many people already wipe them off before using them. Also, he said of SARS-CoV-2, the virus that causes COVID-19, “I don’t think it’s butt-borne, so I don’t think you have to worry.”

Dr Gerba, who has been studying coronavirus transmission for two decades to investigate the role of a toilet flushing in a SARS outbreak stresses “flush and run” when using a public toilet without a lid.

Dr Gerba also said that people should wash hands well post-flushing and use hand sanitiser after leaving the restroom.

Choose well-ventilated bathrooms if possible and do not hang around the restroom in any case, added Dr Gerba.

Related Topics:
Coronavirus Outbreak
Up Next

Odisha’s Fight Against Coronavirus Continues, State Sets Up COVID-Care Homes In All Its 6,798 Gram Panchayats