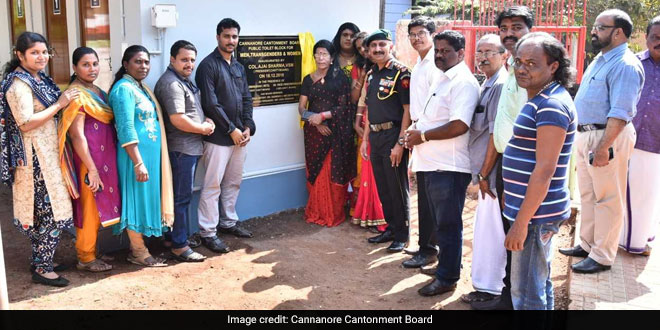 New Delhi: “LGBT Community has same rights as of any ordinary citizen,” said former Chief Justice of India Dipak Misra while declaring the historic judgement of scrapping the colonial law – section 377 of the Indian Penal Code. The Indian transgender community is finally getting the well-deserved dignity and recognition after the Supreme Court decision, reinstating their status and culture in the Indian society. In another stepping stone for the trans community, the coastal town of Cannanore (also known as Kannur) in Kerala has recently inaugurated the first public washroom of the state that is dedicated to the trans community.

Cannanore Cantonment Board (CCB), an autonomous body under the Ministry of Defence providing Municipal Services to the entire Cantonment, inaugurated the first Transgender Public Toilet of Kerala on December 18, 2018 in Cantonment Board Public Park.

According to the board’s Chief Executive Officer, Dr. Vinod Vikneswaran, CCB decided to dedicate its first Transgender toilet as a sign of welfare for the community. Dr. Vikneswaran credited the state government for the inspiration behind this initiative and explained the reason behind their decision to build a dedicated trans public toilet and not a gender neutral toilet.

Kerala is the first state in India to formulate the existing policy for the trans community, it definitely encouraged CCB to implement the decision. CCB decided to implement a dedicated toilet for transgender and not otherwise because of the societal taboos that still exist and the presence of agender and bigender individuals among the transgender community, said Dr. Vikneswaran.

There are about 200 people in the trans community in the town of Cannanore and the neighbour town of Kasaragod and as per Dr. Vikneswaran this is a first step from the side of CCB to normalise the transgender community in the society.

We hope that this initiative brings the necessary recognition and self-confidence to the transgender community residing in and around Cannanore, he said.

CCB has also decided to train the community in the field of sanitation and induct them as contractual employees.

Orientation program has already been conducted among the community members with the help of Suraksha Health Line Project, an NGO in Cannanore which is working for the welfare of Transgender community, Dr. Vikneswaran added.

Dr. Vikneswaran hopes that other cantonment Boards and municipal corporations take heed from this small initiative and take suitable actions considering the well-being of the LGBT community in mind.